We’re well and truly into the festive spirit now. Even been out and bought a decoration for the front door today but no tree or decorations are going up until I’ve Christmas cleaned the house – it’s tradition. At this rate, it’s going to be Christmas Eve before anything gets done cos we’re too busy playing with this blog every day.

Anyway, after listening to a bit of Nat King Cole yesterday, I thought I’d write about another festive and seasonal food that’s out at the moment; chestnuts. Me living the sheltered life I obviously did, I had never tried a chestnut until coming to Turkey. I always knew they were associated with Christmas (because Nat informed me so every year) but they were just conkers to us. They got varnished – if you were cheating a bit – threaded onto a shoelace and hours of fun was had in the playground at school. That was until they got banned – health and safety and all that. 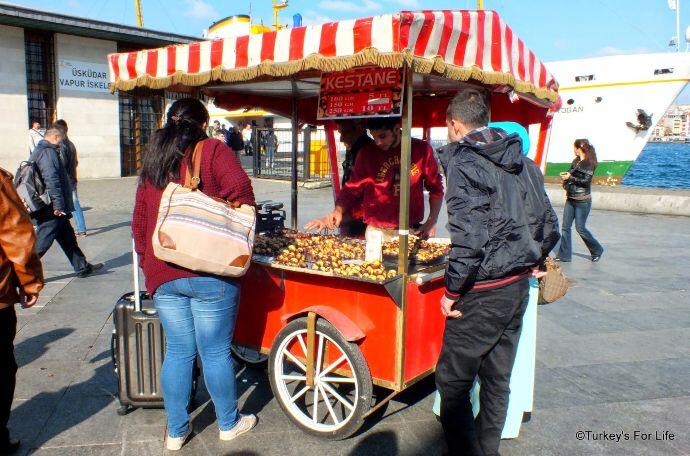 We’ve bought chestnuts in the past and roasted them in the oven but it’s not quite the same as ‘chestnuts roasting on an open fire…’ You need that little bit of black on them and a charred flavour. Mmmm. Most of the bars in Fethiye have real fires and there’s nothing better than sitting in one of those bars and having a plate of hot roasted chestnuts, straight from the fire, handed to you.Right, I’ve mentioned Bruce and Nat now (and somehow managed to link them to my blog the day after – however tenuous it may be). The next one to pop in my head is Bing because we listened to him yesterday too. Hmmm, ‘White Christmas.’ Can’t see that happening in Fethiye somehow. Bing’s already got one vote in our Best Christmas Song poll. Someone’s even voted for Cliff…but let’s not even go there – not yet anyway.