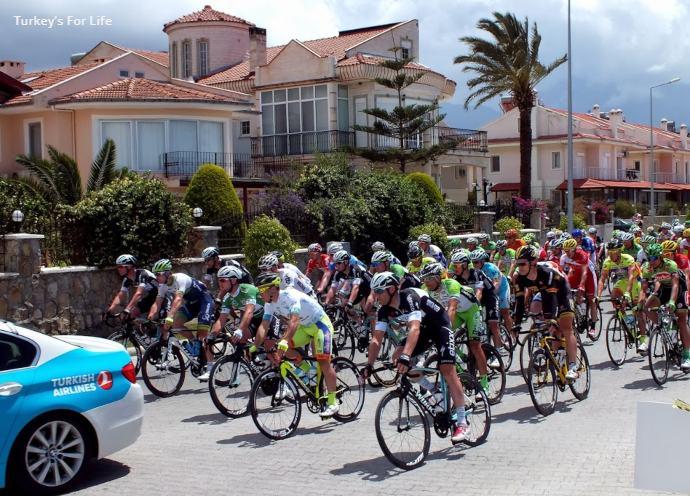 Last April, Fethiye was chosen as the finish line for one of the stages of the 46th Presidential Cycling Tour of Turkey.

All very exciting and we went along to watch.

As you can see from the photo, it was a lovely day and a really good turn out – oh, the competitors don’t half go fast.

I thought I’d get loads of photos but I missed half of the cyclists because they just careered by before I’d even pressed the shutter button.

Anyway, we’ve found out today that Fethiye has been chosen again as the finish point for the 5th stage of the 47th Presidential Tour of Turkey. So if you’re in the Fethiye region on 15th April, come along.

Last year, the cyclists came to Fethiye from Bodrum but this year, you can see on the route map that they’re coming from Denizli.

We don’t know if you’ve ever been on that mountain road through Çameli but it’s a proper crumper.

We got the bus back to Fethiye from Denizli once and I remember thinking, ‘Surely we can’t climb any higher,’ and we did keep climbing higher and higher.

I don’t envy the poor cyclists.

I don’t know much about cycle road races but I presume they’ll be doing a ‘king of the mountain’ thing at this point.

It was on Eurosport last year. If they show it this year, you’ll be seeing Turkey in its full glory.

Well, staying on the subject of cycling, we wrote a post a while back about Oli who is cycling from London to Brisbane with a cricket bat and it’s all for charity.

It fits in with our blog because we love cricket and he had just reached Turkey on his bike.

As I write, he’s cycling from Cappadocia to Adana before crossing into Syria.

If you want to donate to any of his charities or read what he’s up to, we’ve got a link to his blog on the left hand side of your screen.