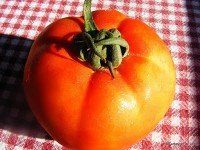 Before we’d ever been to Turkey, neither of us could really see the point of fresh tomatoes. They were the occasional sandwich filler and nothing else. Watery, hard, tasteless, orange things. (We know some people can get hold of good tomatoes in Britain but in our neck of the woods, there’s no such thing.)

However, on coming to Turkey, we soon realised the error of our ways. This is our favourite time of year when it comes to purchasing tomatoes from Fethiye and Çalış markets because the intense heat in the sun means big, fat, meaty tomatoes. We can’t get enough of them. They’re very cheap at the moment and we have a constant supply in the fridge for salads, sandwiches and cooking. How we ever managed without these tomatoes in Britain, we’ll never know – oh yeah, we had to buy tinned tomatoes and countless tubes of tomato puree to cook with. Groan.

We’ve called it ‘ugly fruit’ in the title because this is what the EU is always chuntering on about for what Eurozone supermarkets are allowed to have on their shelves with regards to fruit and vegetables. Us Brits are used to seeing row upon row of shiny, perfectly formed, expensive fruit and vegetables shrink wrapped in cling film or presented to us in depressing polystyrene trays.

Those days will come to Fethiye at some point – they’re already in evidence in the supermarkets – but as long as the markets are there, we’ll be there. And as long as the big, misshaped tomatoes of varying shades are for sale, we’ll be buying them!

At first glance, these tomatoes are most definitely an ‘ugly fruit’ and wouldn’t be allowed any where near a Eurozone supermarket shelf. Great. All the more for us. It was a friend who’s lived in Turkey for around 20 years who told us the ugly looking tomatoes were usually the best ones and she was right. Fewer seeds, vibrant red colours inside and one tomato goes a long way.

We had a ready-cooked roast chicken for tea tonight so I sliced one ugly tomato up and made a tomato and onion salad to go with it. A bit of thyme, olive oil and vinegar drizzled over the top…and I’ve just realised, looking at this photo, I forgot to put some basil on too. Still good though and we’ve still got a couple of kilos of tomatoes left in the fridge that can benefit from our lovely basil, currently growing outside in a pot by the front door.

And for an even tastier salad, check out Barry’s tomato salad recipe. This is our favourite!