Isn’t it great when you get an unexpected, pleasant surprise? When you think you’ve seen all there is to see of an area…and then realise you haven’t.

Being that it’s completely flat, the whole area of Çalış is perfect for people who just don’t do hills and for those who enjoy pedalling around on push bikes. We walk along the beach quite often and admire the same views of Şovalye Island, Red Island and Fethiye in the distance. But, amongst all the flatness, past Çalış and along to Koca Çalış, there is one small hill that juts out into the sea. 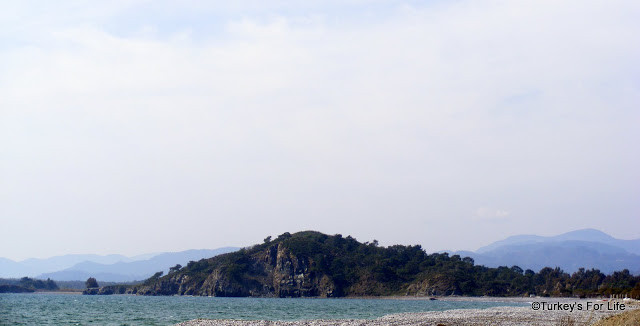 And for years, and many other walks around Fethiye, we’ve looked at the hill and said, ‘We must go up there, one day.’ Of course, whenever you say things like that, you never get round to doing it. Well finally, last Wednesday, after we’d mused about what was going on with the canal in Çalış, we continued along the beach and headed for the hill! There are paths visible from a distance so we were pretty convinced we could get up there but I’ll be honest and say I wasn’t expecting much from our conquering of this little, sloped piece of land. 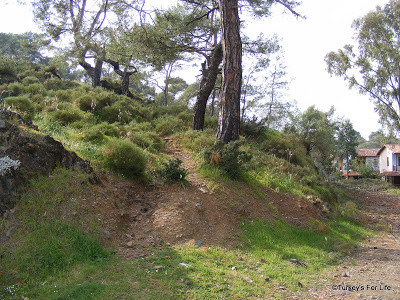 This path led us straight to the top of the hill

As you walk through Koca Çalış, along the beach, the track goes off to the right, around the hill. You’ll notice a fenced off gravestone to your left and a site of colourful holiday homes comes into view (just on the right of the photo above). Between the gravestone and the holiday homes, we found this track, heading up the hill – so Barry strode off confidently and I followed tentatively… 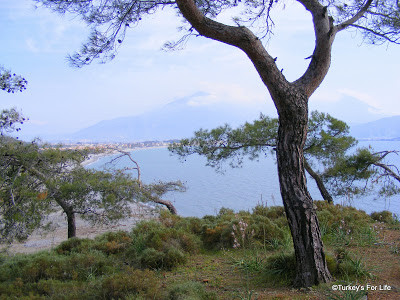 A vista of Çalış Beach and Fethiye through the trees

The paths are not steep and the hill isn’t particularly high but, within a few minutes, we had gained a lot of height without really noticing. We were getting previously unseen glimpses of Çalış Beach through the pine trees and we could hear the waves crashing onto the pebbles below. 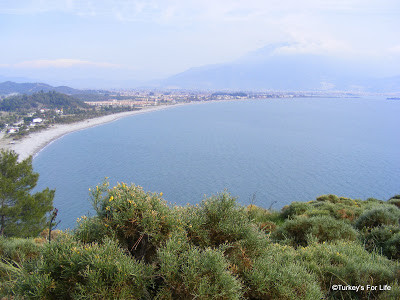 The wide expanse of Çalış Beach with Fethiye in the distance

After around 15 minutes, and a few scratches around our lower legs from the scrub, we were right at the top of the hill – and what a beautiful view across Çalış, towards Fethiye, in the distance!

We only went up there just to see if it was possible to get to the top. Now we know it is possible, and that it only takes about quarter of an hour to get up there, wouldn’t it be lovely to take a little picnic and a book and just while away a couple of hours, looking down over Çalış from above?

If you do decide to take a stroll up this little hill, this is the safest route to take and it’s very easy. We have tried to get to the top in the past from the opposite side but we were forced to turn back as the path we took was too dangerous. Not recommended! We know there is a simple route from that side too though, and when we’ve done it, we’ll post it on here.

@ Anonymous: Wow, hope not! The move is controversial anyway due to the rough waters there but we were hoping it was going to happen further around the bay. Wonder what the reasoning is behind that move?

I understand this is the hill they are going to flatten in order to build Koca Calis Marina. It might be a few years down the line though knowing how slow thing progress there.

@ Jillian: I think we need to get up there again in the next couple of weeks before it starts to get too hot and spend a bit of time up there.

Perfect spot for a picnic! You guys seem to have discovered the best non-tourist spots around!

@ Steve: Definitely! Although it was nice to make a new discovery after so long being here. :)