Last month, we went for a walk along the Karagözler in Fethiye so we could have a nosey at how things were taking shape at the Mediteran Hotel. As you may remember from that post, we discovered that it is the Mediteran no more and it’s new name is Park Marina Hotel (now changed again to the Marina Vista Hotel).

Call it curious or inquisitive (or nosey?) but we had to go down there again a couple of days ago. Well, it all looked nearly finished last month. What would it look like now? We arrived to see that fir trees have been planted around the perimeter of the hotel to keep it more private.

So, we were peering round the corner over to the pool area when we were spotted! A guy shouted up to us, ‘Hello. Can I help you?’

‘Sorry. We were just having a look to see how the hotel was coming along.’ 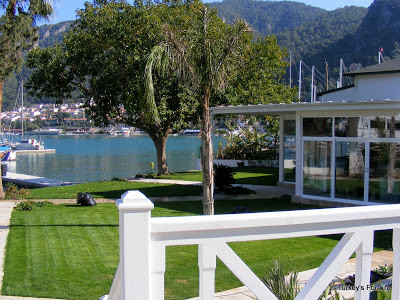 Walking to the marina and restaurant from the pool area

Lush green grass, white fencing and a new marina surround the new restaurant. The restaurant is going to be open to the public as well as hotel guests. I didn’t take photos inside because the furniture was still packed up but I did take a photo of the open kitchen. 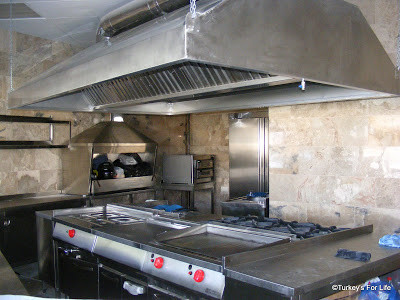 The marbled kitchen in the new restaurant

Apparently, the hotel and the restaurant are going to be open all year. There are radiators inside the hotel itself and this restaurant has a wood-burning stove. 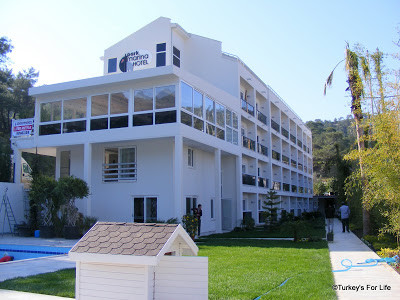 The hotel looks sleek and modern from the outside and the angular gardens match the look. We think it looks great. But what is that row of windows protruding from the side of the hotel? 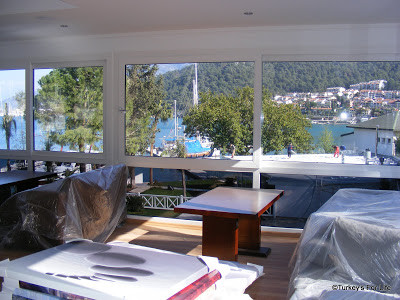 It’s going to be a raised cafe bar and again, it will be open to the public as well as hotel guests. Views aren’t too bad are they!?

We were shown some of the rooms but I didn’t take photos of the main parts because some are not quite finished and there are no beds in yet so it didn’t seem fair. Same theme though. Sleek, modern and wallpaper rather than paint. 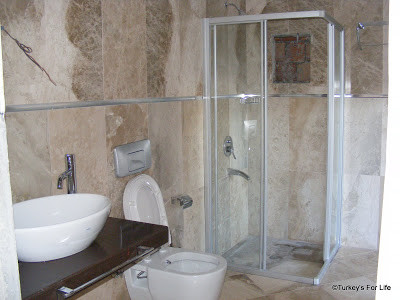 Bathrooms At The Park Marina Hotel in Fethiye

And then there is the top floor. The height of the building has been raised to make space for another floor and this new floor contains ‘the suite.’ It’s two rooms; one right on the corner of the hotel with patio doors along the two outside walls.

If you know the location of Park Marina Vista, you’ll know that this means you have views across the sea and much of Fethiye. There is also a decent-sized terrace here with the same panoramic views over Fethiye. 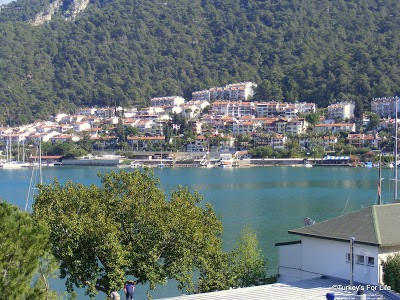 View of Fethiye from the terrace of the top floor suite

There is a second bedroom and bathroom to the suite, separated by a little vestibule area. If we understood right, it can either be used as all one family room or the separate entrance can be locked so it can be used as two rooms.

And the last time we did a post on the Park Marina (Vista) Hotel, we were speculating about the presence of a hamam. It is indeed going to be a hamam and spa.

So, people who were familiar with the cheap and cheerful Mediteran will have worked out by now that those days have gone. Rooms are apparently going to start at around 170 Turkish lira per night. After Yacht Boheme and Yacht Classic, the Marina Vista Hotel is the latest Fethiye Karagözler hotel to go chic boutique!

@ Laurel: It's beautiful. There are a few hotels along that stretch, all with fantastic views.

It looks so nice there. How fortunate that you got invited to look around there.

Love the view from the roof, I can see why that wouldn't come cheap.

@ Corinne: Ir's a lovely kitchen isn't it? Wouldn't mind a big mansion of our own then we could have one like that...one day. :) The hotel's in a great setting.

I like that kitchen and if the bathroom is any indication of the rooms, it'd be a nice place to stay. It looks so tranquil by the water!