In Turkey, the morel mushroom is known as Kuzu Göbeği; Lamb’s Stomach mushroom – and we’re surmising this is because of the appearance of the mushroom. The texture and patterns on the cap resemble tripe (cow’s stomach lining) and maybe the stomach lining of a lamb is similar.

Despite the presence of home made, fast flowing red wine and live music, the Üzümlü Mushroom Festival is actually a celebration of the beginning of Spring and the subsequent appearance of the morel mushroom. Throughout the three days, there are talks about the various mushrooms of this region of Turkey and also organised foraging sessions where it’s possible to go off into the hills around Cadianda and hunt for your own mushrooms.

We’re definitely going to make the effort to get up to Üzümlü early enough next year so we can take part in one of these little foraging sessions. We’ve always liked the idea of picking our own mushrooms but there are so many out there that are poisonous – including the false morel, which resembles a true morel. 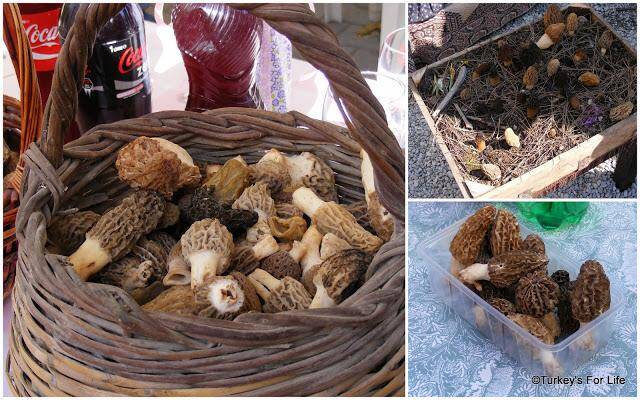 Baskets of morel mushrooms in Üzümlü

This season, morel mushrooms are selling on the markets for around Fethiye for 50 lira (about £20) per kilo. They’re a special seasonal treat and, as we’ve never tried them before, we’ve just been to the market and bought a 200g bag for 10 lira. A quick search on the internet has shown that half a kilo of dried morel mushrooms is selling for around £130 in the UK so it’s only right that we take advantage of and show appreciation for this local, seasonal fayre. Actually, why has it taken us so long? 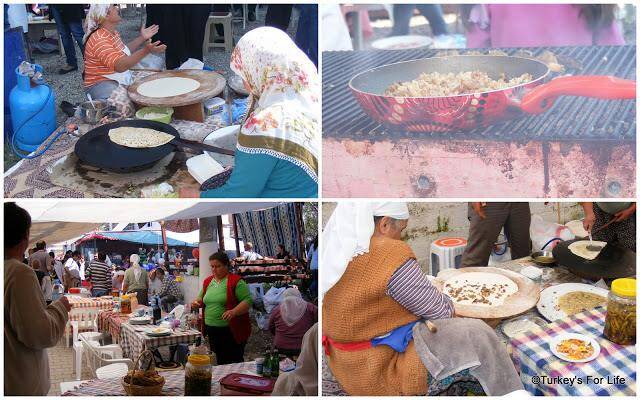 At the mushroom festival, the harvest had clearly been more bountiful than in 2010 and the morel mushroom was being served at all of the food stalls. It was being finely chopped and fried so it could be used as a filling for a rather special gözleme. Other stalls were simply slicing them down the middle, brushing them with oil and barbecuing them. They were then served with a salad on the side.

We’ve only got 200 precious grams of morel mushrooms to play with and we haven’t decided what to do with them yet but it’s going to be something simple. We want to be able to taste the flavour and feel the texture – I hope we’re not disappointed. Maybe we’ll just do as they were doing at the festival and fry them…perhaps in a little butter.

@ Corinne: It is sin't it? Still very expensive for here, though. We know, we know, but we really love the mushroom mascot. It wouldn't be the same without him. :)

That's rather inexpensive! I'd go overboard on stocking up. Btw, the mascot looks so silly! :)

@ Rob: Yes, we're pondering a risotto - but we want some plain,too just to see if they really do taste so special.

@ Laurel: I think people here will start to get more secretive, otherwise everyone's going to be hunting for them! :)

@ The Dropout: I don't think we've ever had a porcini mushroom. I like to try things that everyone goes on about just to see if they're worth the effort! Not sure what or when the next festival will be! :)

Now here's something that's going on my must-try list when I get to Europe. I remember being blown away the first time I tried a porcini mushroom pasta in Italy.Can't wait to see what type of festival you go to next!

I'm never quite sure how to cook mushrooms, so I don't really use them (which is sad, because they are tasty). I sometimes use cap mushrooms in a stirfry, but that's about it. The idea of putting them on the bbq with a little butter sounds great, though - I'll have to give that a try. :)