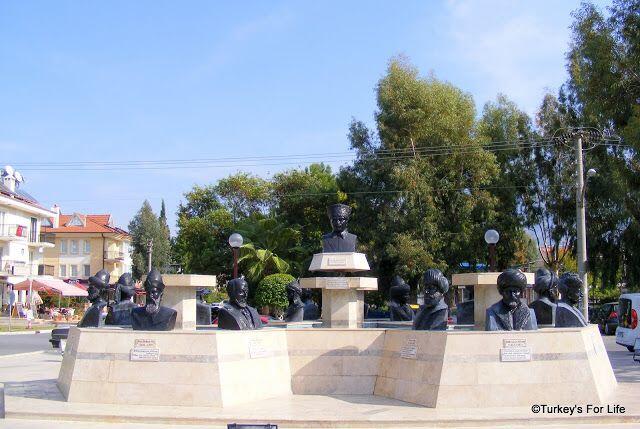 Along Fethiye harbour there are numerous bars, restaurants, street gyms and parks. There’s also a monument known to many as the Fethiye heads or more simply, the heads.

It’s not that we don’t take notice of the Fethiye heads. We do. They’re a perfect meeting place, ‘We’ll meet you at the heads at 12.’ They’re also a useful navigational source for helping people when they’re a bit lost. ‘Walk as far as the heads and then take a left.’ Everyone in Fethiye knows the heads.

But last winter, with a blog post about the heads in mind, we suddenly realised that apart from Mustafa Kemal Atatürk, who sits proudly aloft in the centre, we had never even stopped to look at who the other heads belong to.

A busy summer ensued and the heads were unintentionally relegated to the back of our minds – until today. Today, we needed to walk into town, passing the heads en route. I took my camera along and stopped to photograph each one of the sixteen busts, making sure their name plaques were also in the frame.

Already, this has been a most revealing exercise because we’d assumed that the busts were those of various sultans of the Ottoman Empire. Incorrect assumption!

While we recognise and know a little about some of these figures, a bit of research needs to be done about others to find out why they were so important in the Ottoman Empire and the Republic of Turkey before we do this series of posts. But already, in just stopping to take a few photos this afternoon, we know more about Fethiye than we did this morning when we got out of bed.