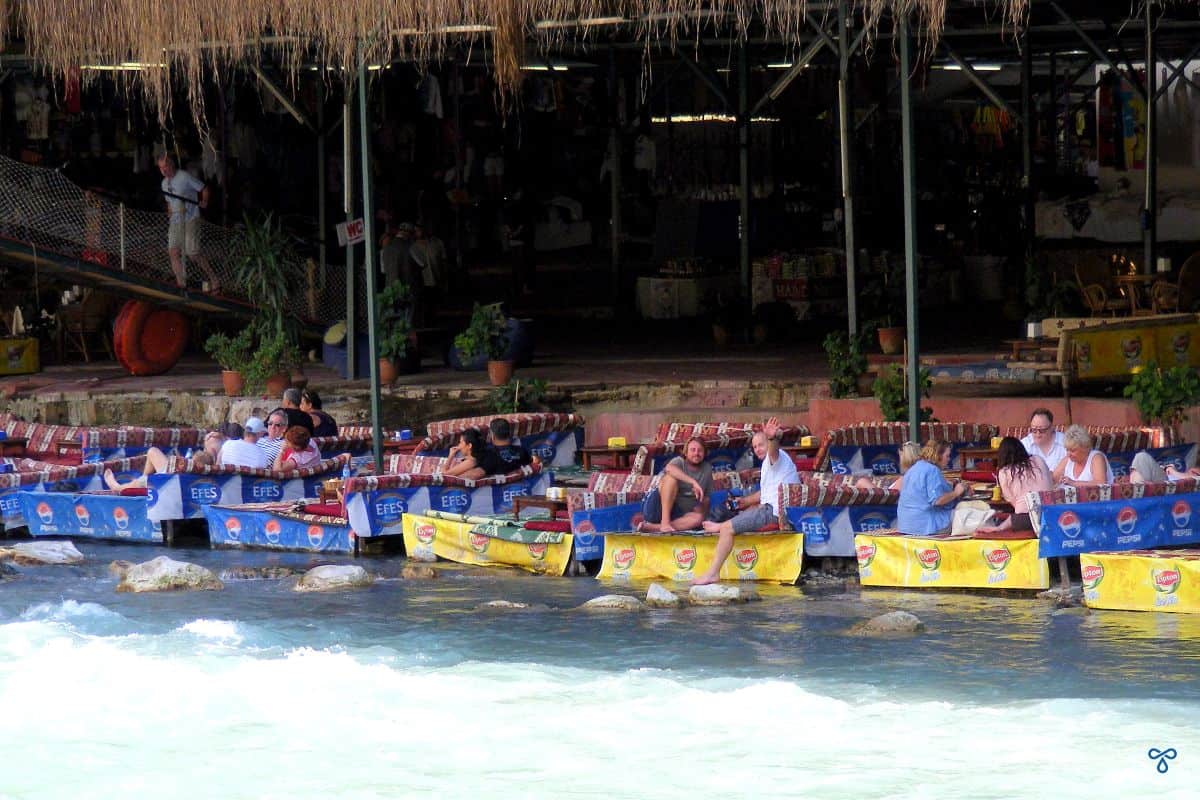 It’s over a week since we went for a day trip from Fethiye to Saklıkent Gorge and something in particular has struck both of us. The phrase ‘Saklıkent Gorge’ conjures up images of ambling along the raised walkways and then performing a balancing act through the rapids in the hope of reaching the other side unscathed so you can walk the rest of the canyon.

But, when you’ve done all that many times, what’s the attraction? And that’s what’s struck us. We had a really pleasant, chilled day outside the actual gorge. We’ve said in the past on this blog that the Xanthos Valley is one of our favourite areas of Southwest Turkey and, at Saklıkent, you’re nestled nicely, deep in the valley.

Granted, these bridges are not the prettiest….and there’s a makeshift, temporary feel to all of the seating area just outside the entrance to the gorge (a few winters previously, heavy storms washed the whole thing away and this resurrection is the result of that). But, once you’re sat on the cushions, Efes in hand, feet in water, life’s good!

In fact, this is the area where we would have chosen to eat had we not received the tip from friends about where to eat lunch in this area.

In low season, close your eyes and the soothing chorus of the gushing rapids and waterfalls make you feel like you’re the only person there. High season – well, you might need to work a bit harder to kick your imagination into action – but Saklıkent is still worth the visit, nonetheless.

Whilst lolling around on the floor cushions in an almost horizontal position, we watched as a continuous flow of more adventurous types set off down the river as part of the very popular river rafting trips.

Being a lazy spectator was more than enough activity for us on our visit.

Shop For Home Made Produce At Saklıkent

But one of the main things we love about tourist attractions like this is the local villagers setting up stall in the hope that some of the thousands of visitors will take a shine to their wares.

We’re suckers for a food stall!

We bought a bottle of home made smooth, syrupy nar ekşisi straight away, but this stall was particularly interesting because of the other goods for sale. The lady opened the jars of harnup pekmezi and andız pekmezi for us to sample.

Harnup is the carob pod that grows all over southern Anatolia and is used to make diabetic chocolate. The pekmez (molasses) had a rich chocolate flavour and my immediate thought was how good it would be to add a spoonful to a chilli con carne.

The andız pekmezi, neither of us had heard of until we saw it here. We’ve looked it up since and andız is a white berry that belongs to the juniper family. Again, it’s prevalent in Southern Anatolia, as is the making of andız pekmezi as a result.

Both of these products were being sold for their apparent health benefits which were explained on the sheets of paper they were resting on.

So, our umpteenth visit to Saklıkent Gorge has left us with happy memories, not of the usual hike through the gorge but of relaxation by the river with good company, cold beers and fantastic food. And we’ve got a souvenir of nar ekşisi that will refresh the memory each time we drizzle it over our fish and salads.