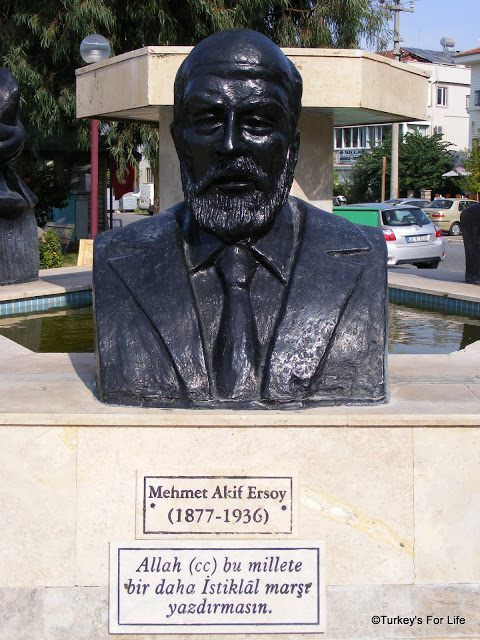 A while back, we said we would be starting a new series on this blog about the famous ‘Fethiye heads.’ I took a photograph of each one and was going to start researching information about each person, finding out why they are important to Turkish and Ottoman history and then there were going to be blog posts about each one. As usual, things never go to plan and it’s now almost three weeks since we introduced the series. Well, we’re finally making a start, with a rough plan of one head each week. Let’s see…

Standing with your back to the sea, the bust of Mehmet Akif Ersoy is just left of centre, watching over the Fethiye marinas. His birth date is written as 1877 on the plaque  below him but other research suggests he was born in 1873 so we’ll display both dates.

Whoever designed this structure along Fethiye harbour obviously had good reason to choose the people represented in the busts sitting atop the lower levels of the fountain – and how could Mehmet Akif Ersoy not be included as one of these chosen few?

A pious man, Mehmet Akif Ersoy was also a highly intelligent person. He graduated from veterinary school with honours and went on to research contagious diseases in Anatolia, lecturing in universities and doing public speaking in order to raise awareness. However, he was also a talented linguist (famous for his command of the Turkish language) and appreciator of literature; so much so that he eventually quit his research work to concentrate on writing poetry.

So why is he a famous name in Turkish history? Mehmet Akif Ersoy was also a staunch nationalist. As the Ottoman Empire crumbled and a certain Mustafa Kemal Atatürk was coming to the fore, Mehmet Akif Ersoy travelled Anatolia, speaking in mosques to make people aware of the situation and to create some nationalist sentiment that would in turn create support for a future, new republic.

And being the talented, nationalist poet that he was, Mehmet Akif Ersoy wrote Istiklal Marşı (Independence March),a poem to give the troops fighting in the War of Independence a boost. Istiklal Marşı was declared the new National Anthem of the Republic of Turkey in 1921, two years before the republic itself was declared.

We found our information about Mehmet Akif Ersoy from his Wikipedia page.