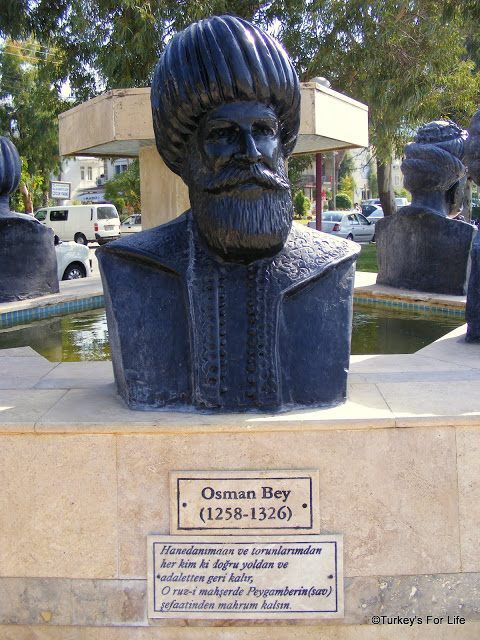 Last week, we finally kick-started our new series about the ‘Fethiye heads’ with a bit of information about Mehmet Akif Ersoy. Penning the national anthem of the new Republic of Turkey in the early 1920s naturally gave him his prominent position in modern Turkish history. He was there right at the beginning of Turkey as we know it today.

And so for this post, it seems fitting to go way back – back to the 14th Century to another beginning. A beginning that was only going to come to an end in the 20th Century when the likes of Mehmet Akif Ersoy and Mustafa Kemal Atatürk were rallying support for a new beginning. Of course, we’re talking about the Ottoman Empire.

Osman Bey (or Osman Gazi) was the warrior who created the Ottoman dynasty that was to last a massive 6 centuries. In the early 1300s, various Turcoman tribes were vying for territory in Anatolia and pushing the Byzantine armies ever north and westwards. Osman Bey was a warrior leading one such tribe – so what made him stand out above the rest?

Firstly, Osman Bey had gained a reputation for being a great leader of his troops and achieved the respect of other Turcomans when he defeated a large Byzantine army in 1301. This meant it became a natural, common sense move for other warrior leaders of smaller groups to throw in their lot with Osman Bey. This in turn meant Osman Bey was now in control of more people and more Anatolian territory.

Osman Bey was also a religious man, and it was his friendship with a holy man named Edibali that helped the Ottomans gain the supremacy they needed.

“Early Ottomans were less concerned with the date of the founding of their state than with the vision that underpinned their right to rule.”
Osman’s Dream – The Story of the Ottoman Empire 1300-1923. Caroline Finkel. 2005

And so began the legend of Osman’s Dream. The Ottoman Empire was built around the premise of a dream that Osman had one night. When he awoke the following morning and explained his dream to Edibali, the holy man explained that the dream revealed God had given imperial office to Osman Bey and his descendants.

For the next 600 years, as a result of Osman’s Dream, the Ottoman Dynasty fought and led with the ideology that they had divine supremacy and a divine right to rule.

We got our information about Osman Gazi from one of my favourite (history) reads, ‘Osman’s Dream – The Story of the Ottoman Empire 1300-1923,’ by Caroline Finkel. If you’re interested in Ottoman history, you can purchase “Osman’s Dream” from Amazon.