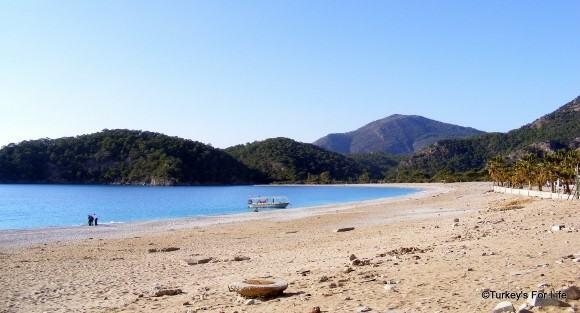 It’s a question everyone asks: What’s the weather like in Fethiye in _____? (Insert month). We all know July and August are scorchers on the Southwest coast of Turkey and rain or cloud is very rare. Spring and autumn are pleasant – our favourite time of year in fact – and winter can be anything from mild and sunny to stormy to just downright cold.

So far, this December has been wonderfully mild and I’m still to drag my winter coat from the wardrobe. A cardigan or small jacket (with an umbrella) is enough for now – but that could change any day. As we head towards the end of the month and New Year, December in Fethiye heralds the end of autumn temperatures and the beginning of wrap-yourself-up winter. It’s a time of clear skies and crisp outlines; perfect for taking photos of the area. All of these photos were taken in December 2010.

I took this photo last December as we were walking along the beach in Koca Çalış. It was 6th December and a beautiful, sunny day. The temperature was mild and we’d been sat at a beach bar, enjoying a drink.

Why would we want to visit Ölüdeniz on a sunny day in the middle of winter when nearly everywhere is closed (Kumsal Pide is an Ölüdeniz winter haven) and the place is deserted? We’ve just answered our own question. To take in the amazing scenery in relative solitude.

Of course, December is not always wall to wall sunshine. This photo was taken on December 30th. The boulders you can see on the beach were washed up during the storm of 16th December; a storm that caused quite a bit of damage in nearby Çalış. Take a look at these post-storm photos of Çalış beach – the morning after the night before.

This photo of Gemiler Bay was taken on December 30th, the same day as the Ölüdeniz photo above, and looking at it has just jogged our memory. This was a particularly warm day.

We had friends over from England for New Year and we were sat at the beach bar, enjoying a beer in the sunshine. It was so pleasant that one of our friends even went paddling in the sea – and it was a Turkish friend who went to paddle; not a British friend pretending it was summer. That’s how warm it was.

Winter is when I really enjoy going out with my camera to take photos of Fethiye under vibrant blue skies. This photo was taken on December 28th.

The friends who came out for New Year were staying at the Yacht Classic Hotel along the Karagözler. They had a fantastic terrace with jacuzzi and a seating area overlooking the marina. As you can see, the weather was perfect so we were able to sit outside with New Year drinks, admiring the view.

And we did say anything could happen with the Fethiye weather in December. As I’m typing this, the sky is heavy with grey cloud and steady rain has been falling since the early hours of this morning. But, the winter cold is still being kept at bay…for now…