“Okay, let’s go to the grove and pick up the olives,” our friend’s dad said, grinning.

Our friend rolled her eyes – this is all old hat to her – and asked us if we wanted to go and help harvest the olives (she quite clearly didn’t). Of course we wanted to go and help get the olives. We were dying to have a go at whacking a big stick about a tree and watching the olives fall, and besides, we’d been fed and watered by her mum and dad all weekend. Lending a helping hand could be our way of paying something back. 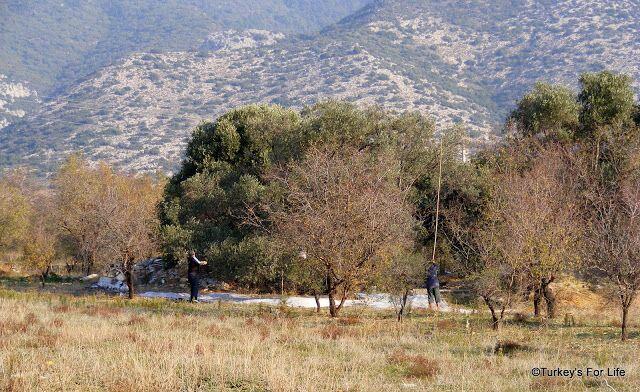 Olive harvest is a busy time in Yazıköy

This conversation was taking place in Yazıköy on the Datça Peninsula, just along the road from ancient Knidos. We were staying with a friend’s parents and it was November; right in the middle of the olive harvest. Yazıköy’s whole existence is based around the growth of olives and almonds, and just about everyone in the village was occupied in the act of tree whacking and piling the fallen black olives into white, nylon sacks.

Dad was eager to get the two foreigners in on the action, so our friend reluctantly agreed we’d all go along.

We all trouped off through the village, buying bottles of water on the way. You can’t do anything in a village the size of Yazıköy without everyone knowing and pretty soon we were a not-very-professional-looking crew of 8 or 9 people, trudging along dry, dusty footpaths towards the grove belonging to our friend’s family. 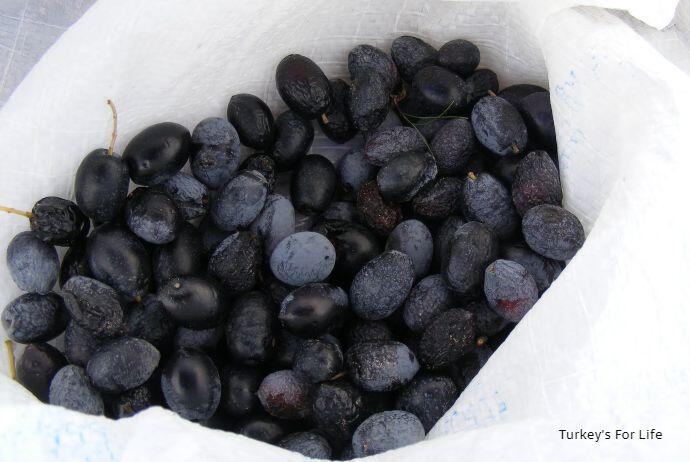 Our olive haul was far from impressive

Dad and the other men disappeared further up the grove while we were given the task of filling one of the white sacks with olives that had fallen to the ground and missed the sheeting they were supposed to land on as they fell from the trees. Afterwards, we were to whack the remaining olives from a couple of nearby trees.

Let’s strip away any images of the Mediterranean idyll here. Yes, we were laughing hard and having a great time, but only because we were all so bad at carrying out our given task. We were soon very relieved that our friend had stressed we’d only be sticking around for an hour because we were tired and aching!

The olives don’t fall easily – they’re more than keen to stay firmly attached to their tree branches – and it takes a fair amount of whacking and shaking to force them to fall. When they do fall, it’s almost as if they’re getting in their punishment for disturbing them, so and they pepper your head like pellets. Some of the softer ones you pick up splat between your fingers, leaving a dark, purple dye. And then, after a few minutes of scratching around on the floor, your back starts to ache. People in Yazıköy do this day in, day out during the harvest and they have our full admiration. Maybe we’re just not cut out for this. 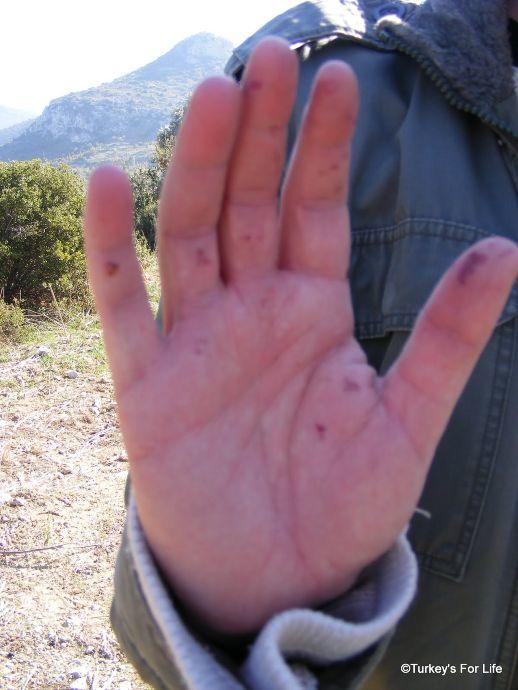 Between four of us, we collected 2 kilos of olives in an hour. Pitiful! They barely covered the bottom of the sack, and so, when the rest of the group emerged with 2 sacks, packed full of olives, we were more than impressed that they’d done this in an hour…until they owned up and said they’d harvested them the day before and had just come today to pick them up.

The olives harvested that day were bound for the olive local olive oil factory rather than being jarred up for eating. We were told that the less rain there is, the more oil the olives produce. A lot of rainfall means they’re good for eating rather than pressing.

@ Çağla: we love olives, too. Never did till we came to Turkey and it took a long time but now we can't stop eating them. Our friends mum gave us a big tub to take home from their village. Yummy! :)

Julia, I enyojed reading this post! Thanks for sharing this lovely story.

I am big fan of olives and olive oil. Of course eastern food is also good but I like more mediterranean meal.

@ Belinda: These will only taste nice once they're in liquid form in a bottle. :)

@Jack Scott: It's definitely tougher than it looks. Don't envy your neighbour. :-)

@Mark: Yes, we've asked about the curing process. Stones and salt are involved. The salt to make a brine. It always sounds a bit complicated so we smile politely at friends mums till they give us a tub. :-)

@Anjuli: Thanks. Yes, definitely a lot of work and you don't get too much oil from one tree either.

@RyukyuMike: They're much nicer than jarred ones - once they've been cured of course. :-)