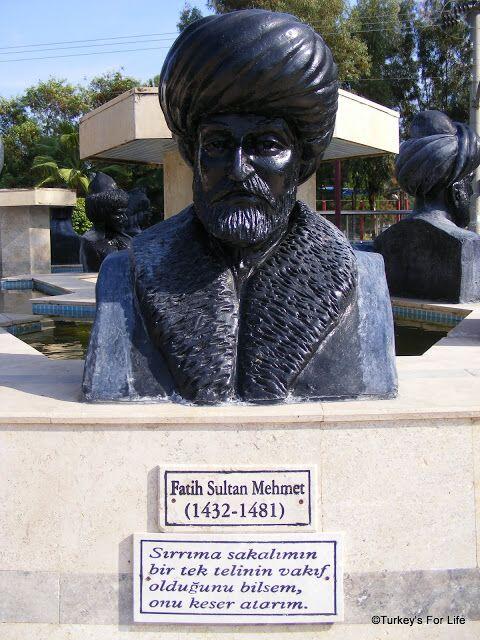 Fatih Sultan Mehmet is number 3 in our series about the identity of the busts sitting on their marble plinth overlooking Fethiye harbour, otherwise known to us as the Fethiye heads. Previously, we’ve researched Mehmet Akif Ersoy (writer of today’s Turkish National Anthem and instrumental in the beginnings of the Turkish Republic) and we’ve also written about Osman Bey (he who began the Ottoman Empire).

While Osman Bey has the accolade of being the founder of the Ottoman Empire, Fatih Sultan Mehmet holds a significant place in history as it was he and his navy who finally conquered Constantinople in 1453 (there had been 12 previous attempts). He went on to make Istanbul the capital of the Ottoman Empire and it remained as the capital until the 1920s when Mustafa Kemal Atatürk transferred administration to the more central Ankara.

Fatih Sultan Mehmet also cemented the power of the Ottoman Empire, making it easier for future sultans to rule. On many occasions, he and his troops successfully expanded eastwards and westwards but it wasn’t just in battle where he was successful. He improved state administration, introduced a penal code and built universities and colleges.

Fatih Sultan Mehmet’s legacy in today’s Turkey is there for all to see. He built Rumeli Hisarı (Rumeli castle) in preparation for the siege of Constantinople and the fortification still stands on the European shores of the Bosphorus Strait today. The Fatih Sultan mosque in Istanbul where his tomb sits was built for him. He was also responsible for the construction of Istanbul’s famous Topkapı Palace which was home to the Ottomans for centuries to come. The Fatih Sultan Mehmet Bridge which crosses the Bosphorus was named after him and there is also one lasting legacy which anyone who knows Turkey will be familiar with: Mehmet remains a very popular name in this country!

As usual, we used Wikipedia and the fantastic Osman’s Dream – The Story of the Ottoman Empire 1300-1923′ by Caroline Finkel for our research. Our little passages are just snippets of information and of course, not everything always ran smoothly. Intertwined with historic social and educational reforms and successes and failures on the battlefield, the Ottoman Empire was packed with murder, mystery, intrigue, mutinies and betrayal – much better than any soap opera you care to watch.