If you read this blog regularly, you will know that we have a very biased fondness for our adopted hometown of Fethiye, Southwest Turkey. The mountains, the Mediterranean, Paspatur (the old town), one of the largest natural harbours in the world, restaurants, bars; what more could we want?

Well, while the local live music scene is very much abuzz, Fethiye has never been a place where the more famous names in Turkish music come to do their larger performances. But last night, all that changed.

Yesterday was one of Turkey’s national holidays, Commemoration of Atatürk, Youth & Sport Day. Atatürk dedicated the day to the youth, and it has to be said that Fethiye Belediyesi (Fethiye Council) did a fantastic job of upholding that by organising a free live concert – and the youth were very much present. This concert was huge

For the last few weeks, posters have been pasted to lamp posts and billboards advertising the Fethiye Gençlik Konseri (Youth Concert) featuring none other than Hadise as the headline act.

Since coming third in the 2009 Eurovision Song Contest with Düm Tek Tek (the competition is taken seriously, here) Hadise has become a bit of a Beyonce-style superstar diva in Turkey.

She’s not our taste in music at all, but this was big for Fethiye and there was no way we were going to miss it.

The venue for the gençlik konseri was the site of Fethiye market. There’s a permanent, small stage there for local performances and we were wondering how it was going to hold up as the stage for Hadise’s performance.

But, silly us! When we arrived at the market area, we were greeted by a huge stage, sound system, lighting, screens – and a massive crowd! Were we really in Fethiye?

Support act for the night was Tan. Tan? Who’s Tan? That’s what we were thinking. Never heard of him. And then he started singing…and it turns out we know many Tan tracks.

We were soon foot tapping along with the bright young things of Fethiye. Again, not our style of music (think early Take That) but he was fairly belting the songs out and he sang completely live. Isn’t that a rarity these days in the world of pop? 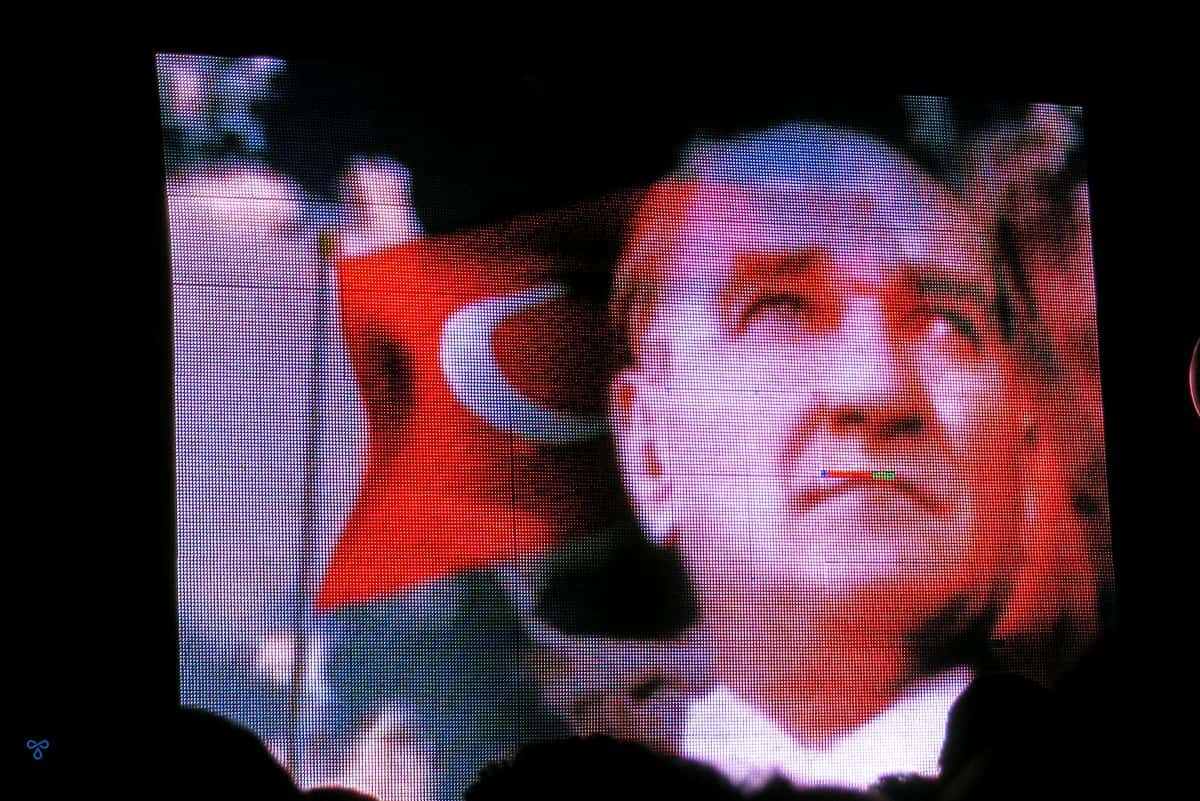 Images of Atatürk appeared on the big screen

This was also a national holiday that commemorates Atatürk, don’t forget. So, while images of Atatürk flashed up onto the big screen, Tan draped himself in a large Turkish flag and roused the audience further.

Tan is a really popular Turkish popstar and kept the crowd going for well over an hour – but there was only one person the Fethiye masses had come to really see. Hadise played a couple of English language tracks as an opener

By now, the crowd was huge. Is this the biggest live music event ever for Fethiye? Certainly the biggest we’ve seen, by far.

Unfortunately, however, we had stood around waiting for Tan, we’d bopped along to Tan for over an hour, we’d waited for the arrival on stage of Hadise…and now our knees were aching.

All four of us were standing on one leg in order to rest the other. On a day dedicated to the youth, we were struggling to keep up with the youth of Fethiye! Draped in the Turkish flag and backed by a team of dancers, Hadise’s performance was pretty much as we expected. Polished!

Did she lip-sync? Well, not so much lip-sync as singing along to her own backing singing – not that the rest of crowd cared a hoot. They were loving it.

And, although we would have loved to hear Düm Tek Tek, we couldn’t help but feel we’d have to wait right until the end…and our knees were just refusing to wait any longer. It was time to go home…

As a friend said last night, Go Fethiye! We really hope this is just the beginning for events like this…maybe next time we’ll be treated to some live Turkish rock. A bit of Athena (who cut their teeth in Fethiye) or even Duman perhaps? Or are we just getting ahead of ourselves a little here…?

@ Anil: You say that with such conviction. We have got Erkin Koray coming very soon but Duman...that would be a dream. :)

Duman goes everywhere and are touring quite a bit lately, hopefully Fethiye soon!

@Ozlem's Turkish Table: We were so impressed with the concert in Fethiye. Can't help but think Duman is not going to happen but we can live in hope. :)

That looks really impressive! I noticed in the last years there are lots of live concerts on 19 Mayis Bayram, I hope you get to be treated to Duman, Sertab and alike too :) Wished to be in Fethiye now!!

@ Italian Notes: We were there very much as observers - until we realised how many Tan songs we knew, that is. Then we were very much part of the crowd. ;)