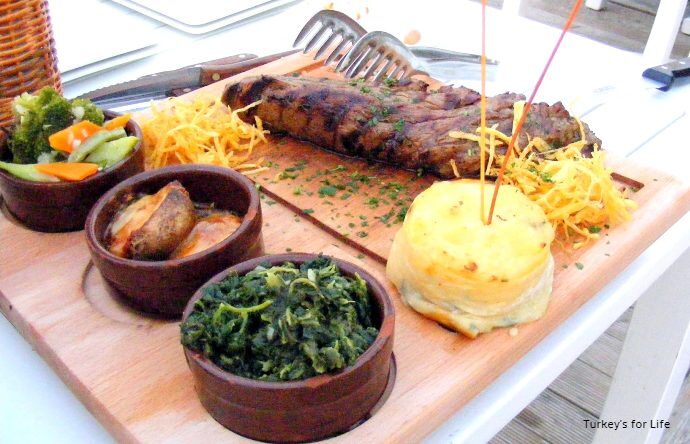 There’s been a definite running theme for us this summer – food! It all started in April/May in Italy where we spent eight days making sure we sampled as much Italian food as possible.

We didn’t make a bad job of it, either.

We’ve eaten classic Turkish street food in Istanbul and here in Fethiye, tried a Yengen Burger for the first time.

But this year, we’ve also been able to indulge in some of the luxurious foods that Fethiye has to offer.

How do we afford that with our budget Fethiye life? We don’t!

A friend treated us to a seafood feast at Girida Restaurant – right up there with the best seafood we’ve ever eaten.

But today’s post is not about seafood. It’s about meat, it’s about steak, it’s about chateaubriand.

Have you ever been out for a meal and you’re really enjoying it, and then the food comes out for the table next to you, and then you crane your neck, put your knife and fork down, “Oh, what are they having? I want that. Where was that on the menu?”

You covet their meal. Well, we and our two friends did that at the Yacht Classic Hotel 18 months ago as we watched a couple opposite us tucking into their chateaubriand.

While our friends were staying at the Yacht Classic Hotel a couple of weeks back, we booked the table and the meal.

We didn’t need a menu. All four of us had waited a long time for this chateaubriand moment and we weren’t going to overfill ourselves by having starters, either. The little meze of olives and spicy tomato was enough.

And then the moment came…

First of all, the sauces arrived on a wooden board. Three different sauces of mushroom, dijon mustard and a pepper sauce.

Each board is between two people…as is the chateaubriand. That also arrived on a wooden board with all the accompaniments.

There was compromise here. I’m a medium to well-done person when it comes to steak and Barry’s a medium-rare.

When you’re sharing the same cut, you need to meet in the middle so medium it was.

The vegetables were placed on the table and the potatoes served to our plate before the waiter got down to slicing the steak.

Both of us were nervous.

The thick chunks of steak were served to our plates and all was revealed.

We were happy with our compromise. All four of us were quiet for a while as we ate every last morsel of our meal.

Of course, we had the backdrop of beautiful Fethiye marina – we were sat right on the water’s edge – but all eyes were on our juicy, tender steaks until we’d polished the lot off.

If we had to nitpick about the chateaubriand at the Yacht Classic Hotel, we’d say we’re not over keen on the plates with their arty portion sections but, hey, who’s complaining when one of those sections is piled with meat?

And we’d love to tell you how much the meal cost us – it’s obviously not cheap – but we can’t do that because this was Barry’s birthday present from our friends.

A birthday present that I got to benefit from, too. Lucky me!

For more tips about where to eat in Fethiye, take a look at our Fethiye Eating & Drinking page.