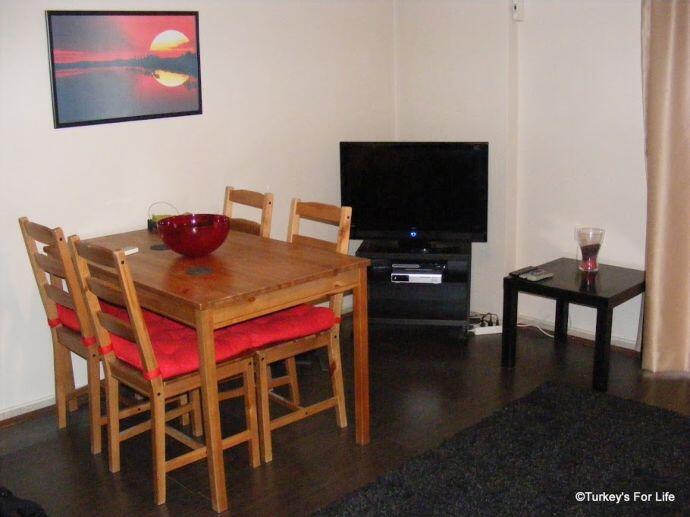 We had a little bit of a clue about where we were going. After getting off the bus from Fethiye to Izmir, we knew we had to find a local bus that was going to take us to Alsancak; Alsancak train station to be precise. “Get off the bus there, phone or text me and I’ll come to meet you and take you to your apartment.”

We’d been given a voucher by the team at Wimdu and so we set about researching places to stay in Izmir. Eventually, after studying maps and descriptions of different areas, we settled on a studio apartment in Alsancak.

Emre was our host and, after getting off the bus at the train station (thankfully, there are GPS screens on the buses so we knew exactly where to get off), we did as he said and phoned him. A few minutes later, he arrived and walked us to the apartment.

“Where are you from?” he asked. You can’t come to Turkey and escape from being asked this question. Our town isn’t the best known town in the world so we always say our nearest city.
“Near Manchester,” we replied.
We waited for the line we know so well: “Ahh, Man Utd.” But no! Shock and delight. “Ahh, Happy Mondays and Stone Roses,” he said. We knew, right then, we were going to like Izmir!

From what we understood, all of the apartments in this block have been made into studio apartments with similar layout and furniture and are rented out to visitors like us.

Izmir is not on the backpacker trail so budget hostels are far from abundant. This studio was the perfect option for us.

As you scan through these photos, you’ll not be surprised to learn that Izmir is home to a rather large, very famous blue and yellow furniture store that originally hails from Sweden. You know the one we mean.

As a result, our studio was modern, with a large, comfortable bed, a stylish armchair and table (adopted by Barry as his laptop space), bedside cabinet and wardrobe in the sleeping area.

The other side of the studio had flat screen TV and DVD player, dining table and chairs…

…and a kitchenette. You can guess what name was on all the cutlery. The shower room backed onto this kitchen but, because of the angles, a decent photograph was difficult to get.

We were in Izmir on a strict budget (as usual) so we got rather settled in our little studio. So much so that we were a little bit sad to leave it.

We lounged about in the mornings, writing blog posts, uploading photos, surfing the net, looking for nothing much in particular – the apartment had wi-fi access.

We stocked the fridge with fruit juice, bought cheese and jam and ate fresh simit from the bakery for breakfast before heading out for the day.

And heading out for the day was easy. We were on a quiet street, yet close to Kıbrıs Şehitleri Caddesi with all it’s shops, eateries and bars, modern buildings and historic homes, the sea, Alsancak pier.

And because we were out most of the day and early evenings, exploring (and eating), we were shattered at night time. Back to our studio then to settle down and watch one of the DVDs we’d brought with us.

Renting an apartment is a great way to get to know a city and the neighbourhood you are staying in. We also felt the benefits of this when we got to know Galata in Istanbul a little more intimately.