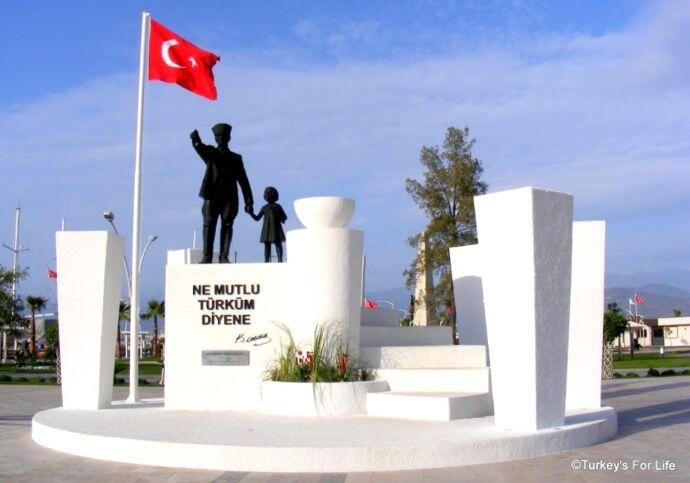 Today, is the anniversary of the death of founder of the Turkish Republic, Mustafa Kemal Atatürk. Atatürk passed away in Dolmabahçe Palace in Istanbul at 9:05 am on November 10th, 1938. Every year, at 9:05 am, a minute’s silence is observed by people all over Turkey. In some towns and cities, even the traffic will come to a standstill.

In Fethiye, a new town square has been constructed over recent months and, at the head of the square, a new statue of Atatürk has been erected.

Fethiye does already have a statue of Atatürk (as do all of Turkey’s towns and cities) but, because of the way the town has developed, it’s no longer in a very prominent position. No danger of that with the new statue. A vast marble square on the edge of Fethiye harbour is the new home for official gatherings in front of the statue. At 8:30 this morning, people gathered here to commemorate the anniversary of Atatürk’s death.

Fethiye’s new Atatürk statue features Atatürk with a child. Each part of the statue and plinth has symbolic meaning and information boards at either side of the statue explain the meanings. They’re written in Turkish and English for those who are interested. We read the boards because the design is so different to any other Atatürk statues we’ve seen so we were curious.

The little girl, for example, symbolises the future of Turkey. Atatürk placed great importance on teachers (Turkey has a much celebrated National Teachers’ Day) for educating the youth. Atatürk’s clothes are a mixture of military and civilian, symbolising both his military career and his time as a reformist leader.

As well as the statue of Atatürk, Fethiye’s new town square and adjoining Uğur Mumcu Park boasts seating areas, clock tower, kiosks and fountains with multi-coloured lighting. We’ll do a full feature post on the whole area as soon as everything is completed.