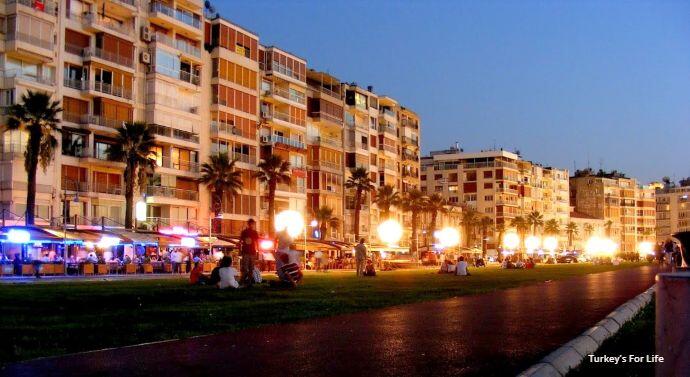 Memories from our time in Izmir: there are a lot of them. Food more than played it’s part by way of the söğüş, Çeşme kumrusu and the stuffed mussels.

In between meals, we also managed a bit of sightseeing. Of course, we couldn’t go to Izmir without taking many photographs of the famous Izmir Saat Kulesi. We walked all along the seafront to visit Asansör and we explored the ancient agora, Kadifekale and the old alleyways of Kemeraltı amongst other places.

But sometimes, it’s the unexpected that really stays with you. As the sun goes down in the summer months, Izmir’s seafront takes on a whole new atmosphere.

Unlike the Mediterranean in Fethiye, even as the sun sets, the Aegean Sea doesn’t calm itself. Waves still crash against the sturdy walls of the piers that jut out from the kordon. Historic Pasaport Pier made a most attractive silhouette.

Strolling back towards Alsancak, where we were staying, the high rise apartment blocks of the Karşıyaka and Bostanlı neighbourhoods suddenly transformed into the fairy lights of the horizon.

And Alsancak – Alsancak is where the locals of Izmir come out to play and enjoy the surroundings of the their city. And this is the atmosphere we loved while we were there.

Those who weren’t having fun in the bars off Kıbrıs Şehitler Caddesi were along the seafront. Restaurants and bars line the kordon and did good trade in the evenings, but it was those that chose to come down to the sea just to sit on the grass that really gave Izmir it’s special atmosphere for us.

This part of Izmir is very much a feel-good area. It makes you welcome, has a fun, yet chilled, personality and is easy to be around.

Each evening, the grassy areas were filled with groups of people enjoying a beer (there are two large beer production plants on the outskirts of the city for a reason) and each others’ company.

And, early the morning after, empty beer bottles and other litter strewn across the grass? No. Either people here take their rubbish away with them or the local belediye (council) has a most efficient street cleaning system.