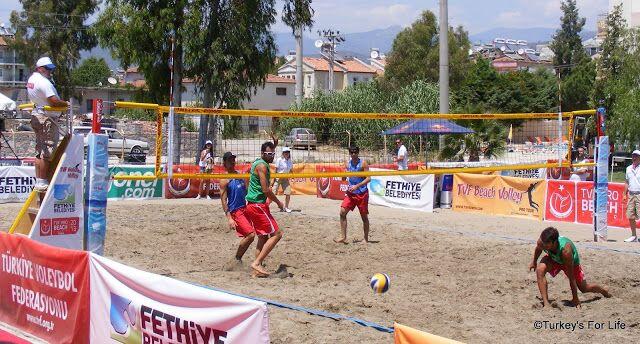 Have you ever been to a beach volleyball match? We hadn’t until yesterday and, well, it’s really good.

For the last three days, Çalış has been hosting a Turkish Volleyball Federation Pro Beach Tour tournament and yesterday, for the finals, we decided to go along.

Volleyball’s not a big thing in the UK; it’s that game we used to have to play occasionally in school PE lessons.

And, when it comes to TV coverage, it’s that game that appears on our screens once every four years for the Olympics.

Even then, it’s on in the early morning and is watched just while we wait for the athletics to start.

And then there’s beach volleyball – does Team GB even have a squad? No idea.

Our knowledge of beach volleyball is scant.

We’ve seen the odd few minutes of random games – again, in the Olympics – and never really shown interest or taken it seriously.

But we do like to go along to sporting events.

After going to watch Fethiyespor a couple of times last season, it will become a semi regular event on our calendar when the new season starts.

For the beach volleyball, we caught an announcement about it on Facebook yesterday morning.

Free entry – why not give it a go?

And we’ll be honest, we went along with the camera, expecting to take a couple of photos before disappearing off again.

But volleyball is pretty big in Turkey. The national teams are world class, it’s televised a lot and people watch it in bars on the big screens.

The crowd for yesterday’s finals was decent. We took our seats along with everyone else for the women’s final.

And then the match started…

Turkish partnership, Gizem-Burcu (in the red and yellow), had the majority of the support. They started well, winning the first set.

And we were really into it, clapping hard for every point. Oohing and ahhing with the rest of the crowd as the ball seemed to sit in the air while each team charged towards it in an attempt to smash it to the ground.

These are the silly comments you make when you watch something for the first time.

Any misconceptions we had that beach volleyball is not a serious sport have been permanently erased from our heads, now.

It was a long, hard match, eventually lost by Gizem-Burcu, but we loved every minute of it.

We were definitely sticking around for the men’s final!

The men’s final was played between Hakan-Nuri (red and green) and Volkan-Adem.

Hakan-Nuri won the first set. And then we all watched a long, exciting second set as neither partnership could get the two clear points necessary to win.

There was a bit of pleading to the officials; was the ball in or out, a complaint about the height of the net after a crucial serve went wrong, one of the players started to carry an injury as the second set stretched beyond 30 points – it was tense, exciting stuff.

It was also starting to get really hot.

The players didn’t seem too concerned by this, but we were relieved when team Hakan-Nuri finally managed to string two points together to take the set and the match.

Big cheers and round of applause all round for these four guys!

And then it was time for us to hit the beach for a much-needed thirst quencher!

Between me taking photos and watching the matches, Barry was also playing around with video apps.

Here’s a short montage of the day (if you are reading this in email or a feed reader and can’t see the video, you might need to click through to our actual blogpost about the Beach Volleyball in Çalış – or you can watch it on YouTube).

This is fantastic promotion for Çalış and Fethiye and, we have to say, fantastic entertainment for those who go along to watch.

Let’s hope for a similar tournament next year.

Keep an eye on our Fethiye events calendar for more events happening around the area.