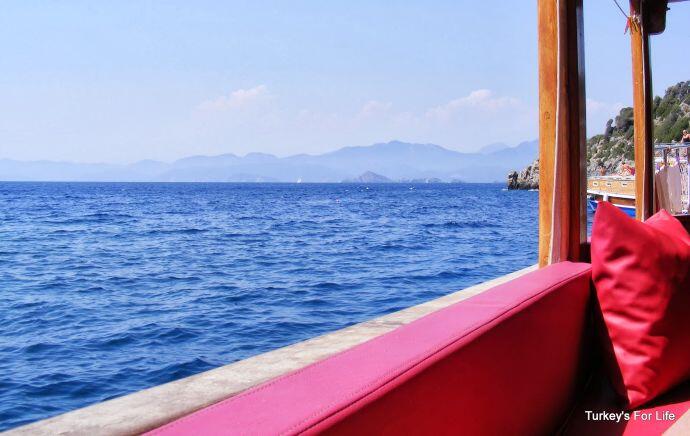 When friends are in Turkey to visit, one of the staple Fethiye days out is the boat trip. Whether it’s the Sunday boat trip to Göcek, a tour around the 12 Islands or a private Blue Bays boat trip, they’re all a perfect (and economical) way to spend a few hours on the Mediterranean.

Many regulars to Fethiye have their favourite boats that they use every time while others, like us, tend to tag along with whoever our friends want to book with.

A Day Out On Ekinim Boat From Çalış

And that’s how, last Sunday, we ended up spending the day on Ekinim Boat, one of the Calış Boat Cooperative members. A friend booked a private trip, we got a message asking did we want to join them…oh, go on then. Why not? Six of us ended up on a boat that can hold up to 25 people. Perfect!

Private boat trips mean you can have a bit of say which bays you want to visit and how long you want to stay there. Ours was a bit unorthodox because our friend had had a phone call from her friend, asking us to drop by Kızıl Adası (Red Island) to pick up some fish that he’d just caught.

And so our first port of call was a rocky bay, teetering down the gangplank, trying to grab the fish. Back across the water to the bays and it was time to begin the more orthodox routine of swimming, drinking and eating…and it’s the food we’re going to be concentrating on in this post.

When asking us about the private boat trips around Fethiye, so many people ask us, “Oh so you get your lunch included, do you? Hmmm, but what’s it like?” And the answer to that question always is, “One of the best lunches you’re going to have during your holiday.” The lunch we had on Ekinim Boat certainly matched up to that!

While we were anchored in bay, the coals were placed on the barbecue and we all went off to swim. Chicken, köfte and the fish we’d picked up earlier were all added the barbecue, followed by thick wedges of bread that had been smothered on one side with a chilli, garlic butter.

As we dried off, meze plates were brought out to the table…lots of meze plates.

All the members of the Çalış Boat Cooperative provide a barbecued lunch with meze – but the cook on this boat had used a bit of imagination and there were a couple of unexpected treats. To complement our chicken, köfte and fish, we were given…

Needless to say, after all that food, it was time to get horizontal to let everything settle. The sunbathers retired to the top deck – me and Barry stayed right where we were, in the shade. Later, a couple more bays were visited and while we were at our final stop, still full to the brim, this appeared…

Apple, honeydew melon, pear, cherries, plums, banana and mandarin oranges served with mandarin orange juice. But no, we’re not finished yet, because then a cake appeared, was sliced up and we were all presented with a wedge of chocolaty loveliness…

Chocolaty loveliness was the last thing any of us wanted – we were struggling enough with the fruit – but our cook told us how he’d made it. How then do you say, “Good for you, but I don’t want it.” So we all ate it – and it was chocolaty loveliness – and he asked us if we wanted seconds. No – but thanks anyway…