Turkish food of almost all varieties is much loved by us – it’s just that sometimes it tastes better because of the circumstances we find ourselves in (remember when we were rescued by köfte in Istanbul?).

You see, we were in a bit of a predicament when we were in Ankara in May of this year. A frustrating limbo. We’d travelled by high speed train from Eskişehir to Ankara and we had no idea if we could get another train to take us on to Tatvan in the east of Turkey.

We should have been able to get a train, but it was all just a bit messy…and that’s for another post.

So let’s set the scene. Here we were in Ankara and we’d decided to forget the train and worry about it the day after.

Two big 10-year-old-Turkey-life-ambitions we were determined to fulfil were right within our grasp, right here in Ankara:

Anıtkabir, we wanted to save, specially, for the day after so, late morning, we set off, on foot, from our hostel to the Museum of Anatolian Civilisations…in the rain!

This is Ankara! When it comes to the weather, they do things differently here! It was cold, it was grey, it was wet…let’s face it, it was still winter.

And drainage? It was raining – but not that hard – but some of the roads were rivers. Our feet inside our trainers must have been pink and wrinkly. They certainly felt that way.

The roads were wide and busy and noisy, we seemed to be trudging uphill constantly. Surely, we were nearly there; actually, surely it must be lunchtime. Let’s eat before we get to the museum. What about that ciğerci over there? 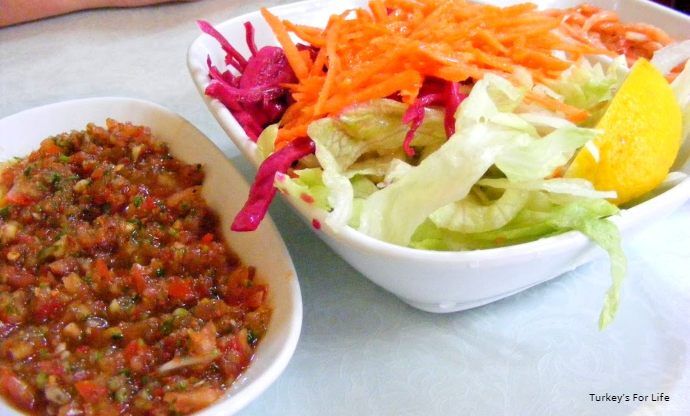 Antep Ezmesi and salad to go with our liver şiş

They had a radiator, which was a bonus! A ciğerci is he (or potentially ‘she’) who specialises in liver. It was a small place but staff were plentiful, making up pack after pack of liver şiş and meze, ready to be delivered to lunching workers.

The menu – Urfa Kebabı or Ciğer. We both opted for the ciğer. Antep Ezmesi, a simple salad and marinated, sliced onions were brought to the table, along with ayran.

Little added extras like this are commonplace in Turkish eateries, but the price on the menu (we THINK it was around 8 TL each) had indicated to us we’d get a few pieces of liver on a stick. These extras were a happy bonus. And then the ciğer şiş arrived. 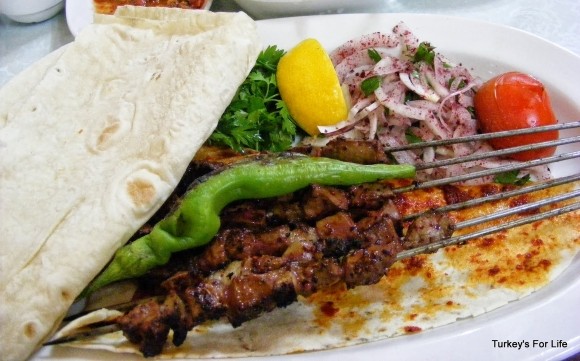 Six ciğer şiş kebabs served with 3 sheets of lavash bread. A couple were sat adjacent to us on the opposite side of the restaurant and the guy glanced over at us two cold, wet, bedraggled tourists with a helpful look, gesturing us to watch him.

He tore his lavaş lengthways and then took one of the pieces. He picked up a şiş with one hand, placed it lengthways atop the lavaş in his other hand, closed his hand around the bread and slid the liver from the stick, thus making it all land along the centre of the bread in a neat line.

It was all so quick, fuss free and obvious…who knew. All these years of forcing the meat downwards with a fork onto the plate below; sometimes flicking it (accidentally, of course) onto the table.

Why had we never thought of this method before? We smiled over in thanks. And each time we effortlessly removed the liver from the şiş with our lavaş, the waiter appeared and removed the now empty metal spike.

The weather was rubbish – there was no getting around that fact – but our lunch had sorted us out for the rest of the day, the rain had slackened off…and we were soon to realise we were just around the corner from our intended destination.

Ankara, with its rivers for roads, had just forced its way a little bit further into our hearts.

@ Alan: We loved this new way of dealing with our şiş kebabs. Made so much sense. :)

@ Ozlem's Turkish Table: Ha ha, we loved Ankara, we were just cold and wet on this particular day, that's all. :)

@ BacktoBodrum: Can't understand why we never thought of it before. :)

Everything is so simple when we are taught the right technique.

That ciger sis looks stunning Julia, Ankara has some serious foodie scene :) Give Ankara another go in a sunny day, (I know I am biased as I am from Ankara : ) but I like that it is a tidy city, mostly: ) Mutlu bayramlar!:) xx Ozlem

. . old ideas/habits die hard - we still have utensils, etc stuffed into drawers and cupboards where shoved them when we moved into our place 16 years ago. Logic may be sensible but it gets in the way of finding/doing things!