Over the years, we’ve been following the progress of Fethiye harbour and the development of the area around it. The last big update was last February where we did a quick summary of the changes from Uğur Mumcu Park (where the Fethiye fountains are) right down to Phase 3 just before Çalış. This is the seemingly never ending tale of the Fethiye harbour development projects.

Well now it’s January 2014. Phase 3 is well under way with a bridge, mini marina for smaller boats and even Ördek Adası (Duck Island). Oh, how we love Ördek Adası! It seems lots of other people do too, as there is always someone (usually adults, like us) stood there with bread, throwing it to the ducks and the other birds that have adopted the area, too.

For this post, we’re going beyond Fethiye harbour and into Çalış, down to the canal…because there’s a huge project going on there, too.

A new road is being laid near Golden Moon Hotel

We saw what we thought was road improvements starting a few weeks back and thought nothing of it. It’s winter. Roads are dug up in winter. The road was being dug away and the canal widened. We just continued walking to the beach. And then, a couple of days ago, we walked down to the beach again. Wow, they work fast in Fethiye when they want to! 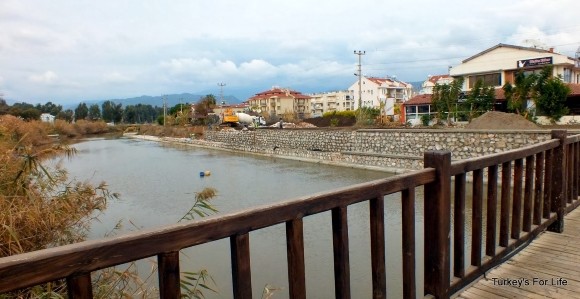 New view of the canal from the bridge in Çalış

The roadworks is actually canal works. Just to give you your bearings (if you know Çalış) we’re on the bridge at the main entrance to the beach. The yellow digger you can see is in front of the Golden Moon Hotel. The canal is now really wide and there’s a very sturdy looking stone wall lining the edge with what looks like a walkway running alongside it. All very intriguing… 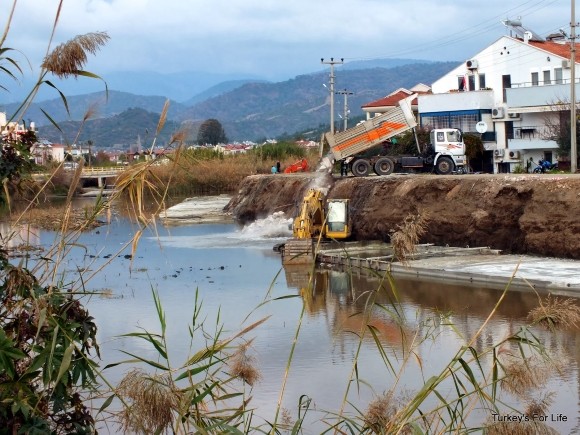 Canal works in the centre of Çalış

A little further down, the work continues, and there are loads of workmen on the job. Like we said; all of this has happened in a matter of days. We decided to walk down the opposite side of the canal towards the Pelin Hotel to see how far down they are going to go with this latest project…and they’re going a long way! 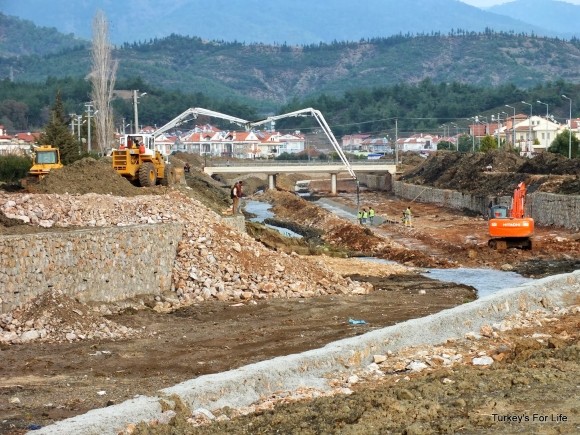 The canal heading towards Huzurevi

All of this stretch, past the Pelin Hotel and parallel to Barış Manço Bulvarı, could have been going on for some time – we don’t come around here very often. But we have seen this section of the canal burst its banks on occasion after late summer and winter storms – and it looks as though potential flood waters should be contained within the walls of the canal from now on. There are also lots of drainage pipes so that water can easily run into the canal from the surrounding areas. Good news for local residents, we guess.

So, is this a case of necessary practicalities being made to look aesthetically pleasing at the same time? Time will tell. We’ll let you know when it’s finished. In the meantime, we have many photo albums on our Turkey’s For Life Facebook page which we update occasionally. One of them is dedicated to the changes in Fethiye, so you can see more pics on there. If you don’t already, then give us a “Like” on the button below:

Really looking forward to our obligatory walk to Caliś so we can see all this. It's amazing how much gets done in winter.

Even more going on today. Çalış canal as we know/knew it has definitely changed. :)

It's always interesting to photograph the same places again and again over time, so you can see the changes being made.

We've got so many photos of the progress along Fethiye harbour and now around Çalış, too. We should do an album when it's all done. :)

Can you get them to do the same in Koca Calis please! We need bigger canals too.

You never know, maybe they're working way round to that area...maybe. ;)

How exciting to see progress that is both practical and nice to look at. :-) Duck Island sounds like such a great place to hang out. :-)

Duck Island is our little obsession. We love it. :)