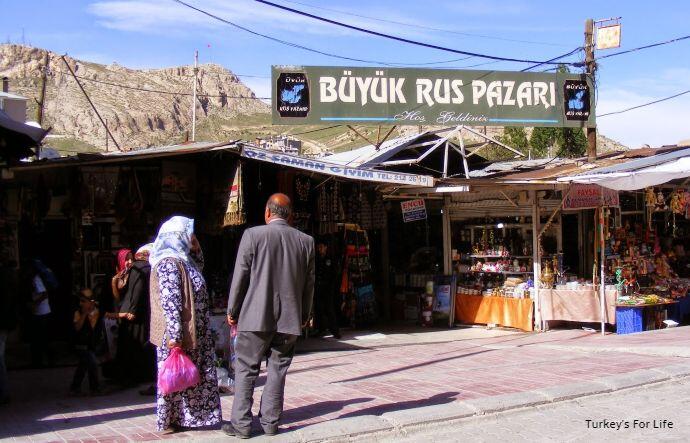 Squirming in my seat. Constantly changing positions. Facial contortions and looking out of the window trying to focus on anything that will take my mind off this awful, potentially very embarrassing situation. It’s agony. Barry’s comforting me.

And we’ve seen the tourism posters of this remote spot we’re heading to. Is there going to be any description of WC when we get there? Well, you just get to the point where you’re past caring. As soon as this dolmuş stopped, I was going to have to pee somewhere.

But anyway, let’s get back to the beginning. We’ve said a sad farewell to our friend in Patnos – just horrible leaving her stood there on the path waving us off as the bus pulled away from the office in Patnos. We’re heading for the city of Van and, from there, later this evening, we’ll fly to Antalya.

But first, we want to go to Akdamar Island, home of the Armenian Cathedral of the Holy Cross. This is perhaps eastern Turkey’s most-photographed, iconic scene. It’s been a long-time ambition to see it in real life, and today is our last day – we can’t leave until we’ve seen it…

It’s been arranged with the bus driver that he’ll drop us off at the relevant dolmuş station to get to our destination, Gevaş. And so we sit there for the couple of hours or so journey…and, as we navigate through Van, the bus passes a large dolmuş station…but we don’t stop.

Eventually, we pull in at the bus company office and everyone gets off the bus…ahh, that feeling, that knowing the bus driver forgot all about you and drove you straight past the dolmuş station quite some way ago.

We heave our backpacks onto our backs and prepare to set off in any direction – well, we’ve not a clue where we are, obviously. And then a voice. Almost flawless English. “Hi guys. I think the driver should have let you off at the station we passed. What are you doing here and why were you in Patnos?”

We turn round to see a much welcome friendly face. Everyone always asks why we were in Patnos. Guess it’s not high on the travel itinerary of many people. So we explain we were staying with a friend and we’re now in Van because, well because we want to see Van and we want to go to Akdamar.

“Wow, thanks a lot. Great to see you guys here. Welcome to my city.”

Never know what to say when people are grateful for your visit. It happened when we went to Şelale Park in Eskişehir, too. It’s a lovely thing, but almost something you feel undeserving of. “I’ll take you to the dolmuş station or else you’ll never find it. I think I can remember where it is.”

And so we set off. “You think you can remember where it is. So you’re not living in Van anymore?”

“No, I work in Marmaris selling day trips and the city is changing a lot so I don’t really recognise it when I come back.”

That’ll explain the flowing English, then. And he’s right about Van. Lots of shiny, new, reflective windows of high rise buildings are filling the city centre. Old buildings that either collapsed or were badly damaged in the earthquake that so devastated nearby Erciş and surroundings are being removed and replaced.

It’s all looking a bit business-like around here.

We’re putting our faith into a complete stranger here. We have to trust him and we’re walking and walking. Our self-appointed guide stops to ask two old guys where the station is. One explains. The other tuts. No, it’s over there. For five minutes or so, the two guys bicker and we suggest we’ll press on alone.

We’re starting to feel a bit guilty now as we’ve been searching for around 30 minutes.

“No, no, I’ll take you. You’ll never understand anyone around here and you’ll be walking round all day.”

“Thanks. Errm, if you don’t mind us pointing out; you work in tourism in Marmaris and it’s May. Shouldn’t you be there, now?”

“Yeah but I’ve been given a few days to look after my mum. Everything is meat around here and she’s been in hospital. High cholesterol. But meat is cheap so everyone around here eats too much of it.”

“Thanks. And then I’ll go back to Marmaris to try and sort out my relationship. My girlfriend’s English. We were going to get married but she wants to live in England and I don’t want to leave Turkey.”

“Hmmm, guess you’ve got a problem there, then.”

Trudging the streets of Van doesn’t seem an appropriate environment for relationship counselling so we stay quiet.

He carries on telling us his life story. He left school at 12 to help out with his family. His reading and writing are not great, “But I can sell lots of day trips,” he says with a wink. And it’s obvious he’s a bright chap. Untapped talent; there’s a lot of it about.

And then, lo and behold, there’s the dolmuş station. He walks us to the dolmuş, he speaks to the driver and makes sure we’re getting off at the right place. He sorts the price for us. We thank him profusely and he says, “Look me up on Facebook. I’m Ali Baba in Marmaris. See you, guys. Safe trip.”

And with that, he’s off. We now have a 40-50 minute journey ahead of us and I’ve not been to the loo since early this morning. And ‘Ali Baba’ – a (not) novel name – we did look him up to say a proper thank you – but we never found him…