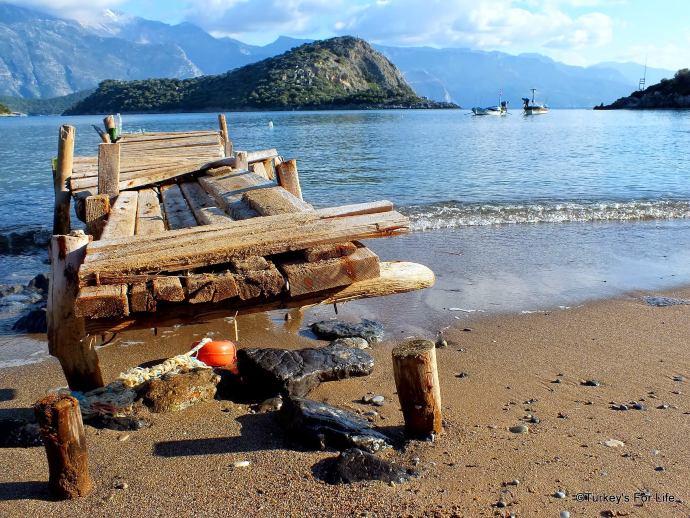 Okay, cards on the table…Gemiler Bay in winter is wondrous bliss for us – no exaggeration there. Summer at Gemiler Bay is just no competition.

These days, watching a couple of guys bobbing about on the water in boats, doing who knows what? Watching a silhouetted fisherman stood on the rocks in the distance.

Smiling at the only other person on the beach as she waited for the guys in the boats.

Well, that beats jet skis, speed boats, inflatable bananas and sunbeds. Because we don’t so sunbathing either.

Of course, for us, winter is going to win.

Anyway, over New Year, we had some friends over to visit. The weather wasn’t the best.

It’s fair to say we’ve had a proper winter in Fethiye this year. The weather gods have thrown just about everything they can think of at us.

Crisp, sunny days; a big freeze; thunder and lightning; high winds and torrential rain, all in the space of a few weeks.

On the couple of days where it didn’t rain we made the most of it by getting a car and going out for the day, but we stayed local and took it easy.

That’s what winter’s all about, taking it easy.

Our friends love Gemiler whatever the season (if there was a world championship competition for sunbathing, they’d be right up there in the finals) so it was a definite on their where-shall-we-go list.

But it’s winter, it’s logging season…and there was a lot of it going on on the road down to Gemiler.

Careful manoeuvring of our car as we weaved between other cars and trucks packed full with smaller branches – no doubt what people were taking home for firewood.

The air was filled with the aroma of pine and we opened the windows to take it all in. It was all very friendly.

One time, we even had to turn the engine off because we’d been waiting so long for someone to fill their tractor trailer with leftover branches from the side of the road.

Of course, their tractor was parked right in the middle of the road – not much passing traffic around these parts in winter – and they continued with their mission until every last inch of their trailer was filled.

And then somehow, they managed a 3-point turn on the narrow road – which also happened to have a hefty drop on the side they were reversing towards – gave us an enthusiastic wave and off they chugged up the road!

Turkish driving comes in for a lot of stick but you can’t help but be impressed when you witness such feats of skill and, dare we say, recklessness.

We were down at Gemiler for no reason other than just to be there.

The scenery, the contours of the bay, the imposing angle of Babadağ, the Byzantine ruins of St. Nicholas island (Gemiler Adası).

They all just sit together perfectly to make the visitor feel so wowed, no matter how many times you see it.

The recent storms had packed the pebbles and sand, forming a steep shelf to the sea at the far end of the beach.

Difficult to walk along but just lovely to be wrapped up warm and taking in the bay for what it is.

We all just wandered around doing our own thing, really.

Our friends were in Fethiye for New Year, a birthday and their wedding anniversary all in one so they were taking photos of each other.

And me, despite many previous visits to Gemiler, my photos of the bay are neither special nor plentiful.

I was just on a photo-taking mission – and that in turn forces you to look at the bay with different eyes.

A quick hop up the hill and, all of a sudden, the beach feels quite distant, and the whole bay changes shape again. It’s no second best, staying local, around these parts.

We were only at the beach for an hour or so – our friends wanted their Gemiler fix and we wanted photos.

After that, it was back in the car to weave our way through the pines and back up the hill to Kayaköy.

Here, we were meeting our other New Year crew of friends so that we could all go and enjoy the Cin Bal Restaurant winter experience together.