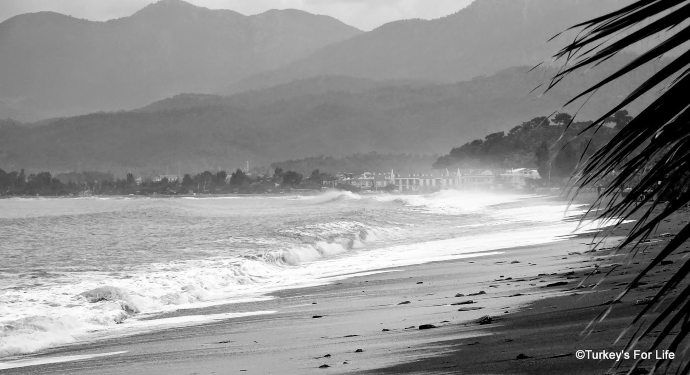 Just in case you go thinking we’ve got a bit of a weather obsession at the moment, we’ve not.

It’s just that, right now, anyone and everyone who lives in coastal areas around Turkish shores is talking about the weather.

In our last blogpost about the weather in Fethiye, we were merely musing about how wet the winter had been, how we’ve had really cold spells, and we wondered what else was to come.

Well, the weather isn’t finished with us just yet. Oh no. Every so often, Turkey is hit with Lodos winds – and these are the winds we’ve been experiencing over the last few days.

Facebook and Instagram have been filled with photos of crashing waves, particularly in Istanbul where hundreds of ferries and flights were cancelled.

People on the ground just took photos or stayed indoors, instead. Well, what else are you going to do?

In Fethiye, we know when the Lodos is on its way.

The current in an almost uniform diagonal, sweeping from the direction of the boatyard.

And the temperature changes radically.

It’s winter and yet the strong winds almost feel like a warm hair dryer blowing in your face.

That’s when we know it’s time to head to some more open coastline for photos.

This time, it was a friend who put his photos of Çalış Beach onto Facebook which alerted us to the fact the Lodos was already making its presence felt in these parts.

The winds which cause so many problems for ships out at sea must have been doing its bit in the open waters of the Med throughout the night. The surf was already tumbling onto the beach at Çalış.

No winds yet, just the roar of the waves.

Not as powerful as those of the 2010 Fethiye storms. But impressive all the same.

We could hear the waves way before we got to the beach.

In places, they were hitting the wall of the promenade, sending sprays of frothy sea into the air.

Just beautiful – and a reminder of the power of nature.

As is usual in winter storms, the pebbles of Çalış Beach had become a perfect, sand and shingle slope with the only debris being the scattered rocks that had been thrown to the shore by the currents.

And, dotted along the sea wall and packed onto the viewing platform at the main entrance to the beach, people just sat and stared and photographed and just enjoyed the moment.

There’s just something so soothing about listening to and watching the almost rhythmical crashing of waves.

This short video was taken on the same day as the black and white photos above.

At this end of the beach, the waves don’t gather themselves as much as they do down towards Koca Çalış.

But you can see, even from the smaller ripples, how high the swell is. And how powerful the current is, pushing the water up towards the wall.

Great to watch for us, safe on dry land, and, of course, we hope everyone everywhere else managed to stay safe.

And oh, okay then, maybe we have got a bit of a weather obsession.

We’ve done it many times, haphazardly, in the past – but, for 2015, we’ve decided, every Monday, we’re going to share a weekly weather forecast on our Facebook page.