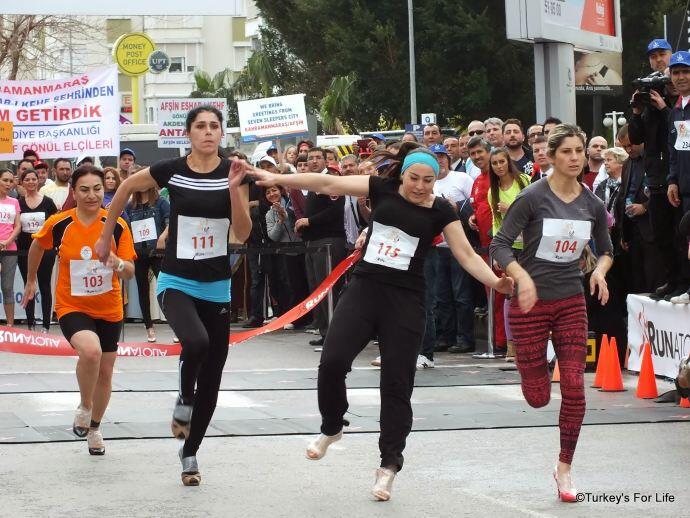 Yes, this year, we again returned to Antalya for the 2015 Runatolia races so that Barry could take part in the half marathon.

In previous years, the event has been called Runtalya and it’s just getting more and more popular every year.

Last year, we realised there was also a high-heel race…that’s women running in stiletto heels, just for clarification.

This could have been going on for some time for all we know. In previous years, such as Runtalya 2011, our presiding memory is just of getting very wet along with a few other people who were taking part in their respective races.

In Turkey, general interest in the big public running events like these, and Eurasia in Istanbul, is really starting to take hold – and it all makes for so much more of an occasion.

Last year, Runtalya 2014 was so colourful, and it wasn’t just the serious runners taking part.

There was much more of a fun atmosphere – so different to just a couple of years before – and, for Runatolia 2015, that vibe continued.

As with last year, we had to go to Terra City shopping centre to pick up Barry’s bib, t-shirt and timing chip on the Saturday.

And this year, we got there in time for the High Heel Race.

And we thought this would just be a throwaway bit of fun, really.

Until we got there and found the road closed off, a proper start and finish line with timing strips, barriers, music blasting, women in full sports gear…

Wearing stilettos and with timing ships tied to their ankles.

Amongst all the fun – because it was a great atmosphere – there was ‘heel control’ where each participant had the heel on their shoe measured.

We’re not even going to pretend to know what the criteria is.

We were just a bit awestruck by it all. What to say?

These women were really out to win this race.

Wow! Two heats, each running a race of roughly 100 metres.

We guess the fastest time wins the top prize.

And, as we waited along the barriers, and the DJ talked down his microphone in-between belting out various extra-loud tracks, and the photographers and cameramen huddled around the feet of the runners, photographing and filming (well, not everyone races in high heels, do they?).

I couldn’t help but think the women’s feet must be killing them!

I was right. Some of them sat down in the road to wait for the start time.

And who can blame them, eh?

Feet, high heels. And loads of sellotape wrapped and wrapped around shoe and foot so the shoe stays in place.

Are they really going to run? That’s what we were thinking until we saw the poster showing the prize money.

Err, too right, they’re gonna run! It seems that, amongst all the fun, the high heel race is not to be taken lightly…

Eventually, the DJ got the runners lined up behind the starting tape.

The music was blasting along the street and the runners were focusing down towards the finish line.

The tape lifted and they were off. Proper fast! Look at the tall girl in black with the blue skirt.

But the girl next to her in the blue headband got a flying start, too.

She was in front until this happened…

I had my camera set to take multiple shots. And, without knowing I’d done it, I’ve captured the whole ‘fall down’ in instalments.

We’ll not do this girl the indignity of putting all of the photos on here.

But, for those ladies who know of the pain of teetering and falling on one’s high heels during a night out, you’ll be pleased to know this girl was as rock hard as expected.

She got straight back up to finish the race.

For the second heat of the race, we made a little video…

Now, for heat 2, so keen were the runners to get ahead of each other that there was a false start.

False start, of course, and they’re called back. But not before there’s another faller and one girl who doesn’t realise and continues running for a while…

We’ve got no idea who was awarded the 2000 Turkish Lira.

But that didn’t take away any enjoyment, amazement, speechlessness from the event.

Did we really witness this?

Just crazy, but all good fun!

This video is only a minute long and we love the girl you can see running at the end.

She’s there for the fun of it, probably wasn’t expecting the other girls to take off like rockets, and resembles lots of us attempting to run for the bus on a night out.

She kept going to the end, too.

Suddenly, especially for Runatolia, going to pick up your bib number, t-shirt and timing chip for your own run the following day, just got a whole lot more fun!