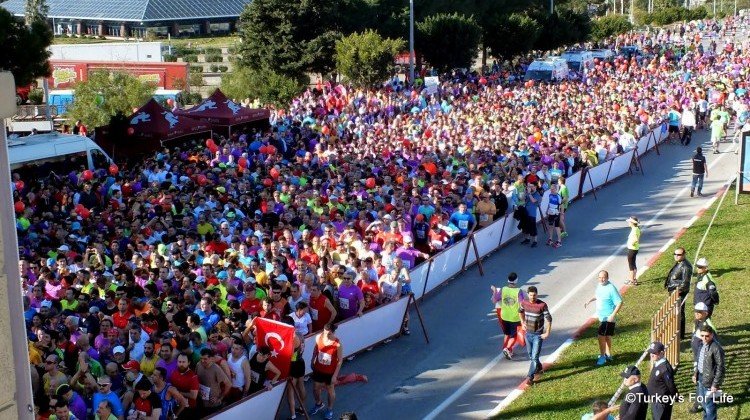 That’s the overriding memory of both last year’s Runtalya 2014 and this year’s Runatolia (there’s been a name change); just a mass of colour.

Last year, I perched myself on the bridge over the start line to take photos and to try to spot Barry in the mass of runners.

Of course, that was a futile exercise but it made for lots of photos.

When you pay to join a running event like this, you get a t-shirt for the event and last year’s colour was red.

This year, when we went to watch the Runatolia High Heel Race and to pick up timing chips and t-shirts, Barry was handed his 2015 t-shirt.

A vibrant shade of lilac.

That lilac, mixed with the red of the Adım Adım runners and the AKUT runners…and then there was also a fair sized team running in fluorescent yellow..

And it was a sunny day. Yes, there was a lot of colour around in Antalya for Runatolia 2015.

Sunday, the day of the main events, was supposed to be the day we were going to blog live.

I was all tooled up – camera, phone and portable wi-fi – and, while Barry was running, I could entertain myself by playing online with all the plans mentioned above.

“Thou shalt not rely on, nor have any expectations of, thy technology.”

As Barry took his place and disappeared amongst the colourful bodies you can see in the photo, Instagram stopped working.

My phone started to go mad, doing things I hadn’t asked it to do.

Then the screen went black.

When I finally got it back on, it had done so much, the battery was too low for me to do anything useful with it!

And so…what to do instead for a couple of hours, being a Billy-No-Mates on a ring road in the middle of Antalya…

Technology safely packed away in bag, the trusty camera came to the rescue.

I spent a bit of time on the bridge, taking photos and making videos. And then, when everyone had set off, I went off for a little wander.

The Cam Piramit (Glass Pyramid) you can see in the photos at the start line is actually part of a culture park.

And, as with last year, the park was packed with lots of other Billy-No-Mates people who were also waiting for friends and family to return from their runs.

A photographic wander, glass of çay and a gözleme later, the time had flown by and it was time to meet Barry again.

No technology again for this one.

We’re back in the good old reliable dark ages and have a tree that we meet under so we don’t lose each other in the crowds.

Well, what’s the point in relying on your phones when the batteries go, eh?

As we walked back to the hotel, our route followed the Runatolia route and runners passed us in the opposite direction, heading towards the finish line – always great to see parents running with babies in prams.

We rounded the corner and caught sight of the lead car with the leader of the marathon running behind.

He was closely followed by the wheelchair race leaders, both male and female. I managed to catch them on camera but the female marathon leaders didn’t pass as we reached our hotel.

Those photos are in the slideshow.

Rest, online updates and showers later, we ventured out again and marathon runners were still plodding the route.

Full respect to them and we made sure we applauded them as they passed. They appreciate it!

A fantastic Runatolia 2015 this year and we’re looking forward to returning to stay in Antalya again (hopefully) for the 2016 event.

And, as for this year, we’ve got lots of tales to tell over the coming blog posts.

We like Antalya more and more with each visit…