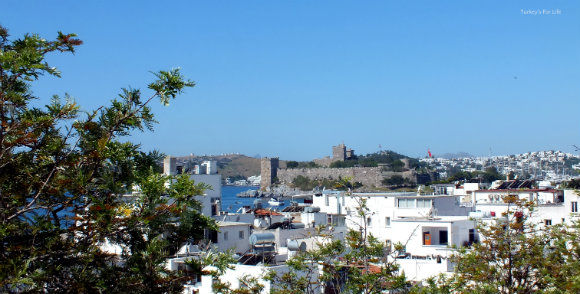 We’re starting to get quite a little collection of comfortable, familiar go to places whilst on our travels around Turkey.

In Antalya old town, we’ve got Hotel Twenty (we stayed there again on our last visit), in Kaş we’ve got Meltem Pension, Istanbul is the exceptional Istanbul Place Apartments and now, we’ve found a great little place in Bodrum: Ağan Pension in Bodrum city centre.

It’s actual name is Ağan Butik Pansiyon but the ’boutique’ part seems to be a new addition following a recent refurbishment.

We can go with that, though; Ağan Pension is all very pretty and neat and tidy.

And we’ve got many tales to tell you from our Bodrum Peninsula adventures but it seems to make sense starting right at the beginning – our stay in Bodrum city centre.

We were in Bodrum for the weekend for the Bodrum Global Run but, as with all the runs we do, we like to make the most of our time away so we booked three nights to give us a little bit of chill out and exploration time.

For a short break, we want a private room, cheap, clean and central. That’s it. Nice and simple.

A quick search on hotels in Bodrum city centre and Ağan Pension jumped out at us straight away.

A great score given by previous guests, pretty photos in the hotel description, private ensuite rooms – and right in the city centre, less than 100 metres from the beach, bars and restaurants.

Oh, and close to Bodrum otogar, too. Seeing as we travel by bus in Turkey more often than not – and we were taking the bus to Bodrum – happy days!

We soon found Atatürk Caddesi, the address of Ağan Pension and, on going to reception, were greeted with a huge smile by the owner and handed a wifi password. Great start.

The next test would be to see if the internet actually functioned…but first, let’s get to our room…

The owner showed us to our room.

We always book the cheapest available double ensuite room (like we said: clean bed and a shower and we’re happy) so there was no balcony – but we still had huge windows that we could open.

We were also happy to find we were in a triple room. The other single bed is out of shot but that immediately became our spreading out area – dumping ground for bags and gadgets.

We had air con (not needed as it was springtime), a flat screen TV on the wall, wardrobe, bedside cabinets and a newly decorated shower room (the shower is to the left, just out of shot).

The wifi in the room was also very fast. All of this for 180 TL (around £45) between us, in total, for the three nights.

We could have booked a breakfast, too, for a slightly higher fee but we like to wander when we’re away and grab an early lunch snack en route.

All buildings in Bodrum have a flat roof, and so, for Ağan Pension, that means one thing: a roof terrace.

And because the pension is on the street running parallel to Kumbahçe seafront, that extra height offered by the roof terrace means you get breezy views over the rooftops, out to sea and over towards the medieval Bodrum Castle.

We had ridiculously good weather whilst we were in Bodrum but it was actually still not officially the start of the season.

Apparently, from photos we’ve seen, the roof terrace at Ağan Pension is usually set up with a seating area in summer – and what a perfect place to sit, eh?

The heart of Bodrum centre but views out to sea, too. We were up there, on that roof terrace, just for a quick nosey at the views – and to take some photos – before we took ourselves off on our day’s explorations. And Bodrum Castle, two photos above, was on the agenda.

So, lots of tales to tell – but at least now you know our little comfortable base where we recharged our batteries at the end of each day.

When it comes to the best hotels in Bodrum, that all depends on what you mean by ‘best.’ It’s that match between what you want from your hotel and what you actually get.

For the purposes of our travels to Bodrum, Ağan Pension ticked our boxes and we’d definitely stay again.