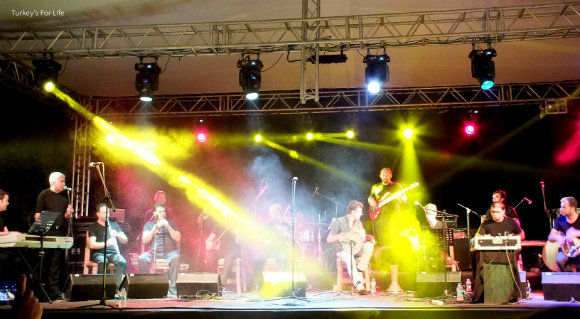 It was definitely ambitious; a 2-day music festival in Kayaköy with performances from six well known Turkish bands and musicians. Some of them internationally famous.

A festival where you could buy tickets for just one day or for both days – and there was camping, too.

On 13th and 14th September, the Kayaköy Roots Music Festival took place. And, after seeing the line up, we were determined to be there…

We’ve watched famous Turkish bands in Kayaköy in the past. It’s a perfect place to enjoy live music.

Last year, it was Baba Zula at the Roots restaurant and bar. But this festival had its very own field set aside.

A large stage, bar, snacks (including yummy sucuk half breads made by the guys from El Camino in Fethiye), craft stalls and more.

And the line up included a group of musicians we’ve wanted to see live ever since we first heard them being played in a CD shop in Cappadocia, well over ten years ago: Burhan Öçal & The Trakya Allstars.

So, we rummaged in the cupboard and hunted out our not-oft-used tent to check it was still functioning after a few years of being jammed under the stairs, almost forgotten about.

Within minutes, it was there, on full display in the lounge.

Yes, we were still capable of pushing two bendy poles through the inner tent and making it stand up – practise was necessary; you don’t wanna look like a novice when you get to the campsite, do you?

So, we were all set. Han Camping in Kayaköy was joined to the festival field to make it possible to walk between the two so we decided to put the tent there.

Now we just needed the tickets for the two days, including camping.

We phoned our friend to see if he was going along to the festival, too, thinking we could meet up. Yes he was.

When your Turkish friends say something like that to you, you know whatever plans you’ve got in your head might as well be pushed right back out of your head again.

Off we went to Kaya, backpack filled with tent, microfleece blankets (the village can be cool at night) and a few clothes for our little camping adventure.

We were all set for Roots Music Festival 2016…

So, we chilled out at Antik Restaurant where we’d arranged to meet up with our friend.

And we chilled a bit more…and the sun lowered in the sky. And the sun started to set. And time was fast running out to get that tent up before all was dark!

As I said though, you just kinda scrap plans and go with the flow when Turkish friends get involved.

As dusk fell, our friend arrived and ordered himself a drink. Not going anywhere imminently, then?

We sat and chatted for a while, darkness falling all around us, before eventually heading to his car and throwing our backpack in the back.

Off we went in the car…to the home of a family friend. Nothing mentioned or discussed. We were just there…

A long table full of people was at the far end of the garden.

Some were chopping salad, others were spearing huge chunks of lamb onto metal sticks to make şiş kebabs.

The stone fireplace had glowing coals, waiting for the lamb. It might have been Day 1 of the Roots Music Festival, but it was also day two of Kurban Bayramı (the Festival of the Sacrifice).

This family were sitting down together to share the lamb. It looked like we were part of it, too!

Any complaints from us? No way!

We could hear the Roots Music Festival getting underway. We were passed a cold beer and the lamb şiş sizzled over the coals.

The salads were dished out. And, by and by, hot, juicy chunks of lamb were removed from their spears and served between us all. And bread was toasted over the remaining coals.

Wow, it was good!

When you get high quality lamb and it’s cooked like that…oh, just don’t even let us start thinking about it again.

Anyway, eventually, we made it to the Roots Music Festival…just in time for the final performance of Day 1.

Headlining was Hüsnü Şenlendirici, a famous clarinettist whose dad and grandad were also famous for playing that same musical instrument.

It was far from a big crowd but the people who were there were loving the show.

One girl even climbed up onto the stage to ask if she could sing one song as he played.

A lot of Turkish performers are approachable like that and she got her wish.

We managed to get a few photos of the whole performance and the internet played nicely so that Barry could live stream a little section for followers of our Facebook page to enjoy.

And at the end of the night?

“Come on, I’ll give you a lift back to Fethiye,” our friend said. And we obediently got in the car and arrived home.

Big thanks to him for the family bayram meal, he gave us big thanks for being there and left.

Before we knew it, we were in our comfy bed at home in Fethiye and not in our tent at the Roots Music Festival.

Well, there was always tomorrow…

And tomorrow did come, of course.

Off we went again with backpack and tent, attempting to do the Roots Music Festival in the way we originally intended.

This time, it was just me and Barry. We were friend-free, so, if anything went not really according to plan, it would be our own doing.

Ahh, we ate gözleme, we enjoyed a couple of beers, we ambled down to the campsite, we bought a ticket and the tent went up much easier than expected.

Oh yes, in our early 40s and we can still do this festival thing!

A couple of beers at the camp site and then we ambled on along to the festival to get our spec.

This time we were going to see all three performances that were scheduled for that night.

The place was still far from full but there was a much healthier crowd for the second night.

We sat down on the straw-covered ground sipping beer from plastic glasses – well, it’s not a festival is it if you’re not drinking your beer from a flimsy (at best) piece of plastic?

First up was Tatavla Keyfi. A new one for us but we loved them.

These guys have a very traditional Greek sound and also sang in Greek for one of their songs.

Very apt, seeing as we were in Kayaköy. We’ll be looking them up to listen to more of their stuff.

Then it was the turn of Fuat Saka – quite a famous artist in Turkey and around Europe but again, a new one for us.

He had quite a traditional folk sound with a western slant and had the crowd up on their feet, dancing around.

We were having a great night anyway but it all got even better when Burhan Öçal entered the stage.

We were expecting just a few musicians – photos of the Trakya Allstars usually show 11 of them – but 15 of them took to the stage.

A full fasıl music orchestra. Yeahy! This was gonna be great!

All those tracks we first heard in Göreme and that we have listened to so many times since, we were now listening to them live and watching the band at the Roots Music Festival.

Burhan Öçal talked to the crowd, they played whilst the violin player got up to dance. And, once more, one of the crowd climbed up onto the stage and put a request in…

Burhan Öçal announced to the crowd that the guy on stage had something he wanted to say.

And then the guy proposed to his girlfriend. Awww, how lovely.

She then clambered up onto the stage and – fortunately – was smiling.

The ring was presented, everyone was happy and the music continued…

At midnight, the Roots Music Festival ended and we ambled back to the campsite.

We used to go camping all the time when we lived in England but we’d not slept in a tent for years.

Ahhh, it was great to be back in a world of backpacks squashed at the far end of the tent and clothes crumpled in a messy heap despite attempts to fold them.

Roots Music Festival, Kayaköy, And Other Events In Fethiye

We opened this post by saying the Roots Music Festival was ambitious.

It was large scale for a small town but we loved it. It’s definitely something that could be really good for Fethiye in the future.

We’ve come up with oodles of possible reasons why there weren’t more people there but the set up was fantastic.

Festivals are the type of event that grow year on year so we really hope there’s gonna be a Roots Music Festival 2017. Let’s see…

A lot of people said to us on our Facebook page that they didn’t know the Roots Music Festival was happening and that they would have gone along had they known.

If you did miss out, here’s a montage of some fantastic music from the second night of the Kayaköy Roots Music Festival.

We keep our eyes peeled around Fethiye as billboards and posters stuck to lamp posts around town are still big promotion tools around here.

Whenever we find out about an event we add it to our events calendar so that others know about it – and if you can’t be there, we love to write about events in Fethiye, too, of course.

There are other events in the area coming up soon and throughout the year so don’t miss out.

Bookmark our calendar so you always know what’s on in Fethiye.