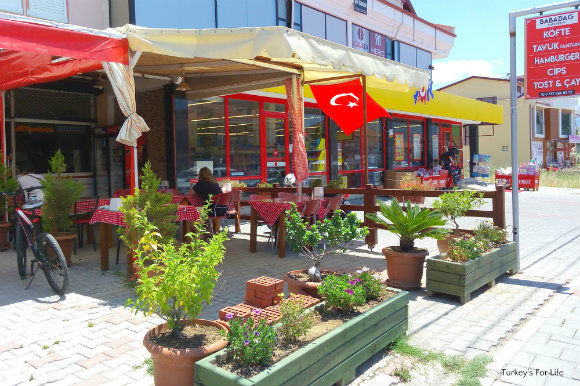 Eating; most definitely one of our favourite pastimes. We cook Turkish recipes at home and we also love to eat out, too.

Yeah, we love us a posh treat every now and then: a seafood feast at Girida Port, perhaps, or a steak at Çarıklı Et.

But Fethiye is also blessed with oodles of places from where you can pick up a quick, cheap snack that’s no less tasty than the expensive treats – especially when you’re in the mood.

Sometimes, you’re just in the mood for simple Turkish food classics! And we have a penchant for snacks at Babadağ Kafeterya…

It’s that street again; Yerguzlar Caddesi. The street that was once just a thoroughfare en route from Fethiye to Günlükbaşı and beyond.

A couple of houses along the way, a couple of small hotels. That was pretty much it.

Now, however, well, there’s all manner of snack places and eateries serving dishes to suit most appetites.

Named after the Fethiye area’s Babadağ mountain, Babadağ Kafeterya has been around for a while, now. A recent facelift and slight name change have made it a more prominent feature of Yerguzlar Caddesi.

It used to be a ‘büfe.’ ‘Kafeterya’ has a slightly more upmarket feel to it. And the simple tables and chairs outside are now decorated with pretty red and white gingham tablecloths.

A bright red and white sign attracts the eye of potential customers and bedding plants and flowers soften what was a grey, concrete space.

What to Eat At Babadağ Kafeterya

We’re in this area a lot as it’s not too far away from Barry’s mum’s home. All three of us either love to come here and sit down for a snack. Or Barry and I will bob in en route to her house and get a ‘paket servis’ (takeaway) for us to eat at his mum’s.

The menu is far from rich at Babadağ Kafeterya. But what they do make, they make well!

You might not see lots of people sat outside when you visit but this place is a conveyor belt of yarım ekmek (half bread) production.

The sandwiches are bagged up and son goes off on his push bike; carrier bagfuls of canned drinks, cartons of ayran and sandwiches swinging from the handlebars. These are all to be delivered to homes and workers in surrounding offices.

Burgers and chips are new to the menu. You used to be able to get kömürde piliç but the industrial spit they had for the purpose gave up the ghost a while ago so they’ve put that idea to one side for now.

They do have cheese-filled sigara böreği, though. You can get a cheese or sucuk tost or a plate filled with ızgara köfte. But we don’t come to Babadağ Kafeterya for any of that.

Barry and his mum always go for the tavuk tantuni.

We’re not talking classic tantuni, here. At Babadağ Kafeterya, cubes of chicken are griddled rather than swirled around in the juices of the tantuni pan. They’re then served in a lightly toasted half bread with salad.

As for me, I’m doing it! I’m going out on a limb! I’m gonna say that this is my favourite place to come for köfte ekmek!

Eek. We’ve not even been to every köfte ekmek joint in Fethiye…yet.

I could change my mind, of course. We love the iconic Köfteci İmadettin in town.

And you can’t beat going to a Fethiyespor match and chomping your way through a köfte ekmek before kick off. But that’s an atmosphere thing, too.

I just love the köfte ekmek at Babadağ Kafeterya. The usta makes a great köfte, for a start.

The bread is heated and pressed onto the griddle and the bread-to-meat ratio is perfect (for me). A bit of simple salad, and that’s it.

On the side, you sometimes get fiercely hot griddled chillies. And there’s always a bowl of minted, pickled gherkins, too.

Paket servis doesn’t mean you miss out on these little extra treats. They’re still given to you, sealed in a little pocket bag. Yummy!

Ahh, the happy joy of snack and street food in Turkey. It’s never going to make a huge dent in your wallet and if you’re in Turkey on a budget, happy days.

The prices have recently been increased at Babadağ Kafeterya and we’re certainly not grumbling about that.

Even with the price increase; 2 chicken tantuni half breads and a köfte half bread – and we still get change out of 20 TL!