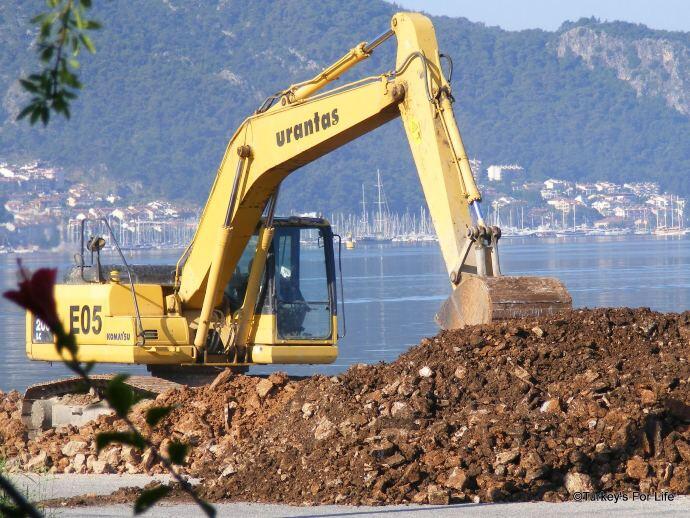 Obviously, when change on such a grand scale is announced, it inevitably divides opinion. When we moved into our house nearly 8 years ago, the powers that be in Fethiye had already been making noises about extending the harbour so that it linked Fethiye and Çalış for a number of years. Nothing ever happened (and we know now, living in Turkey, not to get excited or worried about proposed changes until they actually begin) and then one day, the diggers appeared.

This was a huge project that friends told us would be complete within 12 months. Make that 3 years. The sea was dredged and made deeper for boats that would be able to dock in the future marina. The road quickly disappeared and turned into a massive building site as countless dumper trucks trundled back and forth, emptying the sea bed onto land near Çalış. For two of those 3 years, we climbed over rubble, waded through puddles that had become shallow ponds, teetered along gang planks, detoured through back streets, just to walk from our house into Fethiye. It became the norm to go for a night out at weekends in walking boots.

Eventually, we could see the outline of Fethiye’s new harbour taking shape. Palm trees arrived and were planted in the sludge, hardcore was laid, kerb stones were placed for the new roadside – and then the cobbles, flagging and landscape gardeners arrived. Some friends rejoiced in the changes while others chuntered about their town being spoiled.

We’re in the rejoicing category. We can now walk from our home, all the way into the centre of Fethiye along the promenade, passing boats, restaurants, cafes, parks and gardens and crossing the bridge. Before the new harbour was built, the sea reached the main road, there was no pavement and cars would whizz by, just a few centimetres away from us. Now, pedestrians can walk along the kordon (promenade) with the main road at a much safer distance, 20 metres away.

Why are we telling you all this? Well, this phase of the development stopped around half way between Fethiye and Çalış Beach and rumour had it that phase 2 will begin at some point soon. Rumour also has it that in this area, there is going to be a pier built so that cruise ships can dock in Fethiye. We don’t know what will happen, but a couple of mornings ago…

…the road was closed, dumper trucks, a digger and a steamroller appeared and work began – on something. What’s it going to be? We shall wait and see…