Welcome to our little (English language) page all about Fethiyespor…

The match went to extra time and then penalties. Fethiyespor came out the 5-4 victors!

Watch this space for group announcements – the league is divided into two groups – and other updates as we get closer to the start of the new season.

In the meantime, here’s a bit more information about the team if you want to go and watch a game.

These days, there’s an increasing number of us Fethiyespor supporters – and those with a general interest – who don’t originally hail from Fethiye – or even Turkey, for that matter.

And let’s face it, Fethiyespor are not exactly one of the biggest teams within the Turkish football leagues – so, naturally, there’s no big shiny multilingual media scene around them.

But, between the club and the supporters, slowly, slowly, everyone’s getting there. Fethiyespor is a community effort.

And the thing about Fethiyespor is, yeah, we’re far from the biggest football club in Turkey (we’re no Galatasaray, Fenerbahçe or Beşiktaş, for example).

But, when it comes to a foreign support base, we can’t help but think Fethiyespor have easily got to be up there with the big boys, especially for numbers going through the turnstiles on match days.

Fethiyespor are a special club – which is why we have them in our Fethiye must do list!

Fethiyespor’s stadium on a sunny day – always a happy sight

So, whether you live in Fethiye or you’re here for a break and fancy coming along to a match, this is our info page so you can find a little bit out about Fethiyespor and Fethiyespor supporters.

It’s got sensible bits and trivia bits thrown in, too – because, if you’re anything like us, you’ll compare to British (or your own country’s) football. But Turkish football is Turkish football.

If you’ve landed on this page and are wondering about upcoming fixtures or results, or the league table, you can see these in the right sidebar of this page.

Or you can view our dedicated Fethiyespor fixtures and results page and current league standings for more information, too.

The official name of the club is Fethiye Spor Kulübü (Fethiye Sports Club).

Many football teams in Turkey have ‘spor’ in their official name and you’ll either see it as a separate word or tagged onto the end of the club name to make all one word.

Reasons for this are unknown by us. But ‘Fethiyespor’ seems to be written as all one word, more often than not.

Have a look at the club logo and guess when Fethiyespor was founded. No detective work necessary here, and every Fethiyespor supporter knows and cherishes the year 1933.

Well, what can we say; there’s a lot of love for Fethiyespor!

As for club highs of their recent history, reaching PTT 1. Lig for the 2013-14 season was massive. Of course, that’s the aim of the club again.

For a one-off, though, Fethiyespor beating Fenerbahçe 2-1 in the Turkey Cup in December 2013 is never going to be forgotten.

No mega rich multinational corporations stepping in here to build a glitzy stadium with their company name plastered all over the outside of it.

No other name either, for that matter. We are Fethiye Şehir Stadyumu (Fethiye City Stadium) and while it’s certainly no big shiny stadium, when you see some of the other lower league football stadiums / grounds around Turkey, we don’t do too bad. 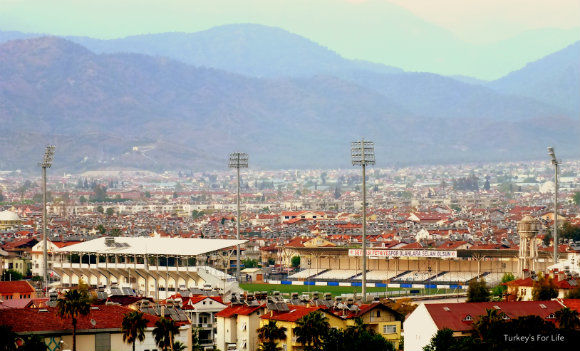 Fethiyespor’s stadium – Maraton stand has the blue and white edging

There are three stands for home supporters:

In the past, there have been artist’s impressions and promises of a new stadium in the pipeline, too. It’s just that this pipeline seems to keep growing in length. With a few bendy bits thrown in, too, just for good measure…

In previous seasons, if you went to a match, the team seemed to be playing in all manner of colours that bore little or no resemblance to lacivert-beyaz (guess this is football). 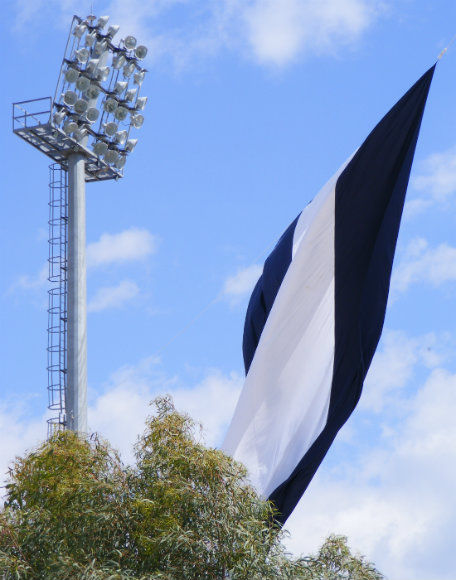 For the 2021-22 season, we’re happy enough because the new kit design has been announced and, along with other colours, we do still have some evidence of the blue and white.

The new kit will be available in the Fethiyespor Store in town, where you can also buy official memorabilia of the basketball team.

Fethiyespor have an official Facebook page and they’re on Twitter, too. They’ve been on other social media outlets with varying degrees of ‘activity’ but there’s been a commitment since the 2015-16 season to more Instagram activity.

They’re a good bunch, the supporters of Fethiyespor – and, like we said above, the club has also got a decent number of non-Turkish supporters, too.

We all enjoy and suffer matches on a regular basis. Well, if every match was all happy and rosy, we wouldn’t be in the league we’re in, would we? 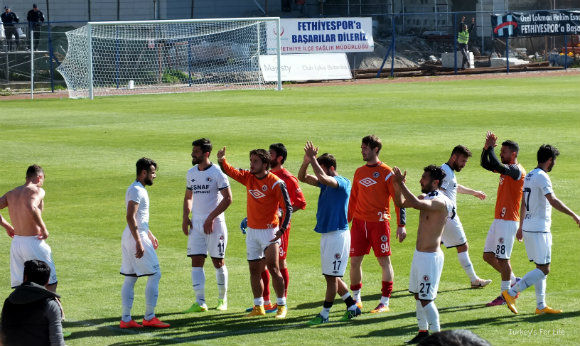 At matches, Fethiyespor players acknowledge the supporters before and after the match

All football clubs in Turkey have their own supporters’ groups. They who travel home and away, never to sit in the comfort of the ‘posh’ stands because they stand and they chant and they make loads of noise and they have banners to declare who they are.

And for Fethiyespor, this group of supporters is Apaçiler (Apaches).

As well as their home banner, they’re no strangers to a swanky banner for away games. Guess it’s more important at an away game to make ones presence felt.

For me personally, when we’re at matches, I love to photograph the opposition supporters and their banners. 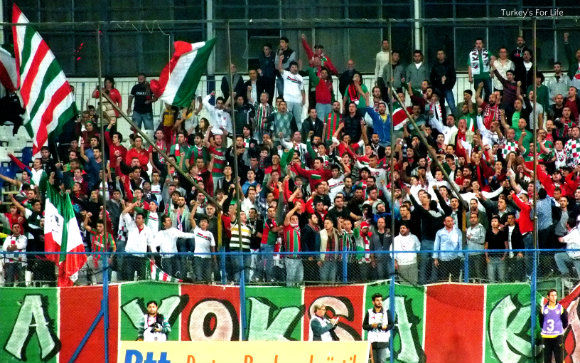 So, we’ve got the Apaçiler group of supporters.

All football groups have a leader; the ‘stand leader’ (tribün lideri). In Turkish football circles, especially in the Super League (SüperLig), these guys can become pretty famous. They’re definitely famous in their own club world. 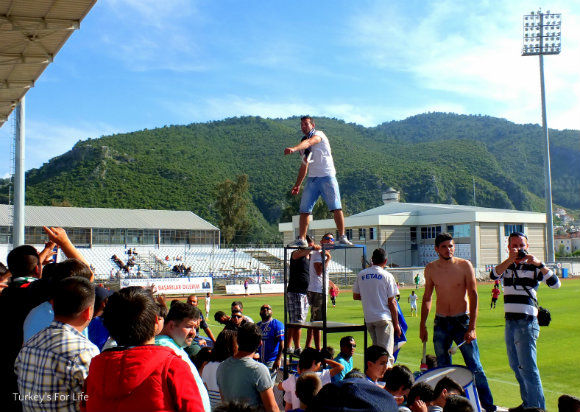 Never any shortage of enthusiasm from Muammer Beylem

Muammer Beylem has his own little platform at the halfway line of the Maraton stand.

At the side of the platform are iron frames for holding drums. Yeah, there are drummers, too. Noise and choreography is what it’s all about and Muammer Beylem is the controller of all that.

What to sing and when to sing it! And if you’re not joining in, there are assistants who will make their way to your part of the stand to encourage you otherwise.

About Fethiyespor supporters of the other variety…

Yeah, never fear. Not all Fethiyespor supporters stand and chant for 90 minutes throughout a match – much as the core Apaçiler would no doubt love that.

Some supporters just like to go along to matches and watch, in their own little world.

We always sit/stand close-ish to the Apaçiler bunch because we love a good noisy atmosphere at a match.

But we stay far enough away not to get caught up in the ‘choreography.’ This occurs with varying degrees of success. 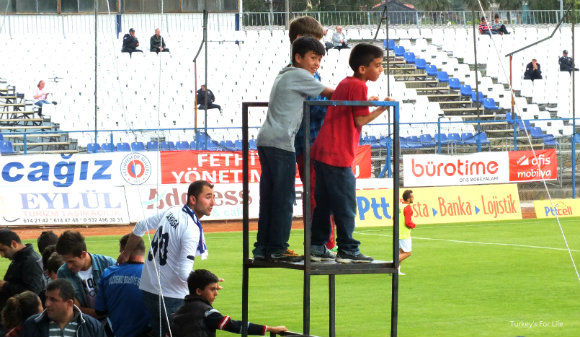 Yes, the Fethiyespor-supporting-diaspora is rather large.

In an effort to spread the word and teach the world about Fethiyespor, many of the club’s supporters have photographs of themselves taken in random parts of the world, displaying some sort of Fethiyespor regalia.

This is then posted to social media. Mapping the world with Fethiyespor.

Let us just say right now, we know not all the details about Fethiyespor and its accounts books – much as we’re sure many of us would love a good curiosity nosy.

No, this is a just a little section on creativity and community.

When we went to a match one time with a Liverpool-supporting English friend who was here on holiday, he was pretty impressed that Fethiyespor even existed with a team of full time professional players.

And it must be hard work. We know there are clubs in some leagues whose players are not best pleased at not receiving their wages on occasion. Their clubs have no money.

Fethiyespor has a bit of leeway to get creative. Here’s a few of things they do to get a bit of cash into the club:

Well, we do keep saying ‘community’ and this is where it gets a bit creative. The belediye offer facilities and Fethiyespor make money from them. For example:

Before the beginning of each season, there’s a big drive to ask supporters to buy season tickets.

It’s money upfront for the club and if you do buy one, we’re told it’s a much bigger percentage of your cash that goes to the club than if you buy a ticket on match day (but, obviously, that’s appreciated, too).

This situation is something that’s probably alien to most British sports fans (apologies if you’re from elsewhere in the world – we don’t know your sporting situation).

We Brits tend to buy our season tickets to guarantee our regular seats, get first dibs on cup competition tickets and save ourselves a bit of cash in the long run.

Not at Fethiyespor (and no doubt other Turkish clubs!)

Certainly in the Maraton stand, you sit / stand / jump up and down, wherever there’s a gap. Your seat number is meaningless and we like it that way.

Also, you could even end up losing out on a bit of cash. If the club are on a losing streak, attendance goes down, and, in the unthinkable event that things get really bad, match ticket prices can get reduced to encourage more people to come to the games.

But, we’ve got Fethiyespor-supporting Turkish friends who buy season tickets and don’t even live in Fethiye!

They live in Istanbul and know they’re only gonna get to a handful of matches whilst they’re back in Fethiye to see family and enjoy their town.

Things work differently around here. Season tickets are nothing to do with ‘saving a seat’ or saving some cash.

All things being equal (which means if Fethiyespor play well during the season), you will save a bit of cash in the long run, but it’s just about making sure the club gets some cash – and showing your support, too, of course.