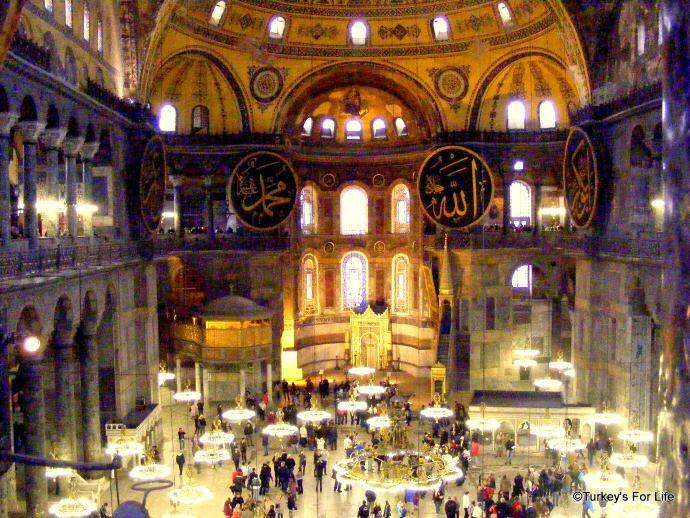 Six years ago we visited the amazing city of Istanbul for the first time, no doubt with the same aim as every other first-time visitor to the city; we wanted to see Sultanahmet Camii (the Blue Mosque), Topkapı Palace Museum, Aya Sofya (Haghia Sophia) and the eerie Basilica Cistern. They were on our must-see list and whatever else we could fit in around those would be an added bonus.

Istanbul cast its you-will-forever-be-addicted spell over us and, since that first visit, we’ve returned whenever we can, neglecting the sightseeing in favour of wandering back streets, sampling the huge variety of street food such as döner kebab, people watching in bars. For us, just being in Istanbul is enough – but for our recent visit, we decided it was time to stop being lazy. We came up with an Istanbul itinerary which was to gee us up into reacquainting ourselves with the sights we’d seen previously as well as hopefully discovering some new jewels. Aya Sofya was our first mission!

The most amazing and mesmerising construction in the world? For us, that’s a definite YES!

Aya Sofya was a favourite from our first time in Istanbul, so if we missed out on everything else this time, we just had to see the interior of this magnificent building again – especially since we’d heard the scaffolding had finally been removed from the central dome.

Early morning and steady rain meant the horrendous queues we’d prepared for were yet to grow and we were through the turnstiles within minutes. We’d been here before, we’d seen Aya Sofya before, but nothing prepares you for the sight that hits you as you reach the grand entrance doors. Aya Sofya was designed to display the superiority of the Byzantine emperors over their subjects and to impress foreign visitors. 15 centuries later, these two foreign visitors did an involuntary intake of breath as we entered.

Despite the constant crowds of camera-wielding tourists, the colossal dimensions of Aya Sofya effortlessly absorb all of this, leaving each visitor with a true sense of awe.

At the time of its construction, never before had a building like this, with its 30-metre dome, been attempted. One has to doubt whether anything similar will ever be attempted again – certainly not a construction that would still be standing after hundreds of years.

If you’re a museum addict then your hobby can soon rack up the liras when visiting the museums of Turkey. For some places, it’s difficult for us to justify the fees, but the 20 lira entrance fee to revisit Aya Sofya was more than worth it for us. Aya Sofya is a special experience rather than a mere building to be ticked off your been-there-done-that list. But while we’re on the subject of lists, you probably won’t be surprised to discover that Hagia Sophia is a UNESCO World Heritage site that makes up the historic areas of Istanbul.