Chips (kızarmış patates – fried potatoes), although not often associated with Turkish cuisine, definitely make an appearance from time to time on the Turkish table.

While a Turkish dish might not traditionally be served with a mountain of chips on the side, deep-fried vegetables, including those of the potato variety, often appear on the trays of the bain-marie in Turkish lokantas.

A few years ago, we stayed near the town of Datça with the parents of a friend for a few days. The mum was a fantastic cook and, for evening meal, served a feast of Turkish food, including a huge, communal plate of kızarmış patates.

We remember watching as she prepared the chips first and then put them out on the table to cool right down while she served the rest of the food. We thought this very strange, but what was even more strange (for us) was, when we could all eat no more, the chips were placed in the fridge and served again – cold – with breakfast the morning after.

And, we recently had a village breakfast in Kayaköy with Turkish friends. They ordered chips to go with it. Chips with breakfast is perfectly acceptable… 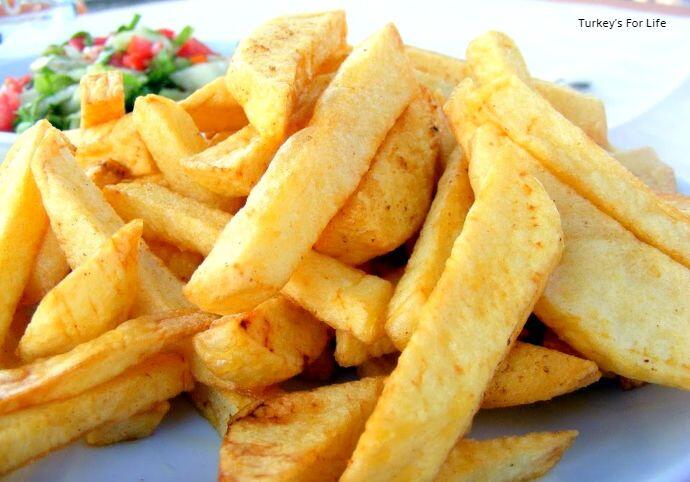 When it comes to chips, you just can’t beat the real homemade chips

So, we’ve established that Turks eat chips. But where are we going with this?

Well, the first time we came to Turkey on holiday, we were really pleased that wherever chips were served, they were real chips. Real slices of potato that had been dropped into hot oil and deep-fried.

To get real chips in a restaurant in the UK was nigh on impossible, so it made for a refreshing eating experience.

And then, as the years progressed, the dreaded, powdery, frozen French fry started to make an appearance at many of the eateries in and around Fethiye.

We worried for the future of the chip as more and more places served the easier, frozen variety and more and more of our Turkish friends embraced the world of ‘fries.’

Tasty, homemade köfte being served with frozen fries – just not right! Was real food going to lose out to its processed competitor?

Well, fear ye not, real food lovers. The real chip – the kızarmış patates – is fighting back and is enjoying a bit of a renaissance in Fethiye.

While there are many restaurants that will continue to churn out meals served with ‘fries’ (and yes, we know there are many people out there who prefer them), other restaurants have stood firm throughout and even some of the new places have opted to serve the real fried potato.

Hurrah to that, we say.

Which side do you fall on? Are you a fan of real chips or do you prefer the frozen ‘fries’?

For real chips in the Fethiye area, I can recommend Mutlu Cafe which is on the main road between Ovacik and Hisaronu. In a sea of restaurants serving 'full English breakfast, all day, every day', Mutlu was a welcome respite. The menu is limited, but everything we tried was good - and cheap!

@ Sarah: It may seem trivial to many but it really irks us. Glad you agree! :) Thanks for your support - although even we didn't participate in the chips for breakfast. ;)

Great cause. Long live the real chips! Chips for breakfast sounds great to me.