In our previous post, we were losing ourselves in the forest of traditional Turkish gülets that were crowded into the boatyard in İçmeler.

Once the meeting was over between our friends and their potential future employer, it was onwards to the town of Turgutreis on the opposite side of the Bodrum Peninsula. And why was that?

After Bodrum centre, Turgutreis is the second largest town on the peninsula and, fittingly, it has a rather posh, rather large marina. Remember, our friends work on private boats in the summer season. 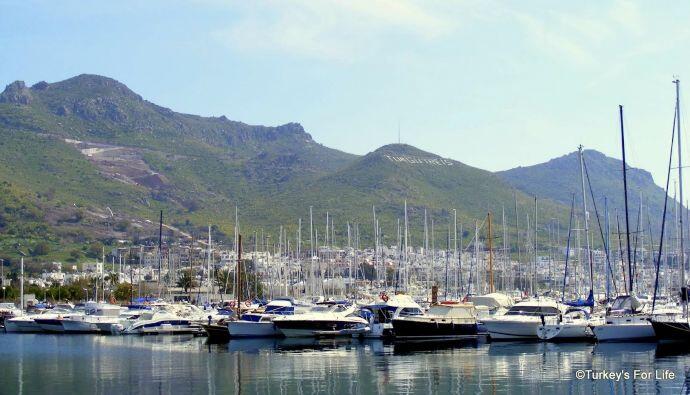 Turgutreis has a large marina

Again, meetings had been arranged for potential summer work and again (we’ll never get used to this in Turkey) we were invited to sit on the boat while working terms and future contracts were hammered out.

It must be the British in us but we just can’t get with this. We once more opted for a photographic exploration of the area.

The maritime scenes at Turgutreis could not have contrasted more to those at the İçmeler boatyard.

The former was home to scores of beautiful, hand-crafted wooden gülets while the latter brought us right into the 21st Century with a bump. Here, we were confronted with a scene of luxurious, modern yachts, the like of which are owned by folks whose income bracket is at the dizzy heights of which we’ll never see.

We’ve seen similar at Fethiye marina – but Turgutreis marina is industrial-strength yacht luxury on a large scale. Luxury yachting is a thing in these parts. The supremely upmarket marina at Yalıkavak proves that! 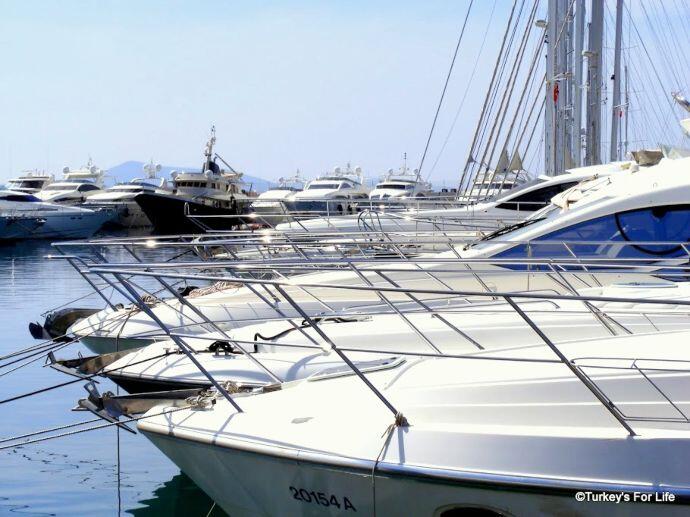 Once you’ve seen one yacht…

The larger of these yachts are the type our friends are more accustomed to working on. Us? We were happy spectators. Taking photos of boats is one thing – but running one, sailing between countries, bays and islands on one? Maybe a holiday on a gület, yes, but these modern craft just don’t quite cut it for us.

Of course, if we ever got a rich friend who owned one and offered us a ride out, well that might be a different story. Don’t hold your breath waiting for that post on this blog, though; we’d need to find the said rich friend, first!

Our photo story on Turgutreis is concentrated around the marina because that’s where we spent most of our time while we were there.

We did have a quick wander around the town – it was March and much of it was closed – and we had a walk along Günbatı Plajları (Sunset Beaches). Because of its position on the peninsula, Turgutreis is famous for its sunsets. 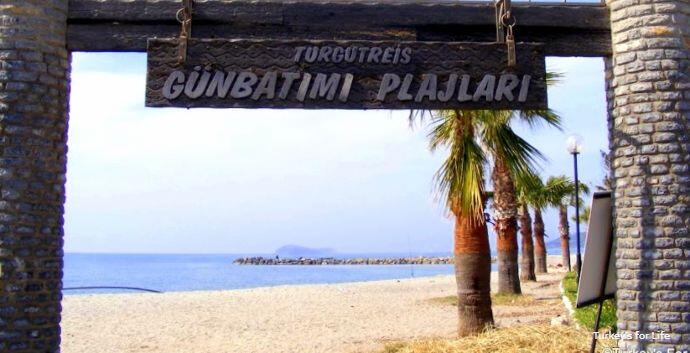 If beaches are your thing, Turgutreis has beaches with sunset to boot

A further reason for concentrating on the marina is that the town of Turgutreis is also named after a 16th Century admiral who went by the name of Türgut Reis.

He’s a much respected sailing chap in Ottoman history so we’ve stuck to the boats in this, the town that carries his name. But what we most remember about Turgutreis is this. 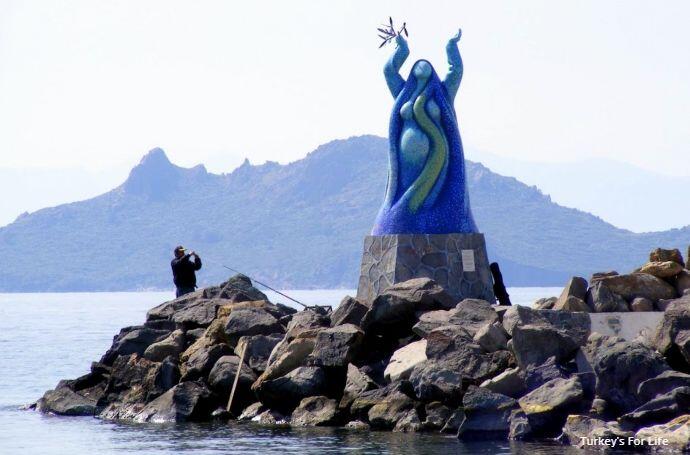 We love the Statue of Peace – a symbol of Turgutreis

Isn’t she beautiful? Well, we think so. To be honest, the main town of Turgutreis didn’t really hold anything memorable for us – it was modern blocks in a modern square.

Whichever she is, her intentions are honourable. She carries an olive branch in her right hand, she surely represents the colours of the sea, and she definitely dominates the scenery around the entrance to the harbour for the local fishing boat.

We admired here for some time. For us, this statue is Turgutreis.

@ Natalie: Ohhh, we all love a lottery moment. :) Our friends love the boat thing but the one they're on at the mo, the family are going back and forth between the Balearics and Capri - all summer. Think I'd go stare crazy. :) Think they'll prob get their own boat at some point.

I have often thought about working on the boats. It would be a great way to explore however if I did not like the rest of crew or boat owners, there is no getting away is there? I imagine there to be very little "me" time. Thinking of that lottery moment again when I can buy my own! :)

@ Leigh: We love the statue, too. Glad you like it and yes, there2s a lot of money around the marinas of Turkey! :)

I love the statue and the colours they used in it. That's a lot of money tied up in boats!

@ Rambling Tart: That's exactly what we think and she definitely stands out in Turgutreis because apart from the mosque, there are no real buildings of interest. We loved her. :)