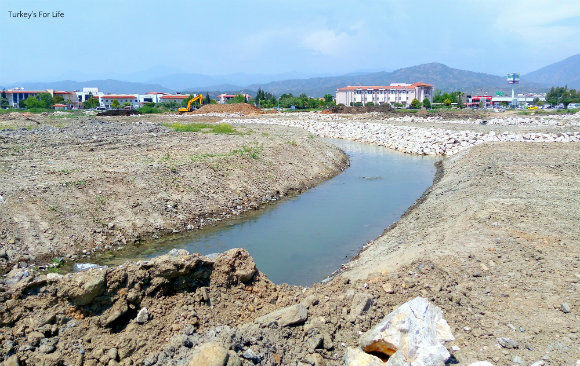 Well, we’ve not had one of our random Fethiye updates for a while, have we? Certainly not monthly, anyway! That’s life, isn’t it?

I started out 2017 with a mental note to self. A New Year’s Resolution. Make sure the monthly Fethiye news update goes out every month.

And oh, look. Here we are, in May, with the first one of the year…

Where Did The Time Go?

Hmm, good question. Where indeed did the time go?

Our lives have just been so full doing all the things we usually do – so full that we’ve not had time to sit down and write about all that stuff!

Nice that that’s the case…but we love to blog about that, too. More hours in the day, please!

Anyway, let’s have a very random update and see how we go from there. Fasten your seatbelts!

Always a favourite topic of conversation. For years, we’ve had a mix of absolutely nothing happening interspersed with diggers and dumper trucks moving piles of soil from one place to another.

Well, that’s what it looked like to our untrained eyes, anyway. There must have been method to all of this.

Anyway, over the past few weeks, a method does seem to be emerging. Much of this area of Fethiye is wetlands, and, of course, the water needs to go somewhere.

Original artist’s impression images, some years ago, showed a huge park for this area with trees and water features. Whether those plans are still in place or not, ahh, time will tell.

But there is now a little maze of waterways and it looks like they’re being walled with rocks and boulders. Progress!

A Nail Biter For Fethiyespor

Fethiyespor supporters don’t do things by halves! There we were, languishing in the relegation zone with two matches to go. The final home match of the season was a must win.

What did the supporters do to show their support for the team? Watch the short video above to see.

And we don’t mess about in Fethiye. Not just cars and bikes for us but a couple of lorries for good measure, too. Anyone not in the know would have thought Fethiyespor had won the league!

But no; we were all going to the match in need of a win.

A huge crowd – by Fethiyespor standards – with a few supporters of other teams in Muğla joining us all to help the team over the line. A 3-0 win was just perfect.

The final match of the season was away to Erzurum last weekend and Fethiyespor survived their relegation battle to live to fight another day in 2. Lig. The bottom three teams were relegated.

Phew, that was close!

So That Means It’s Summer

The end of the football season and we’ve already had family over for the first of their two holidays.

That means the summer season has started. And let’s all hope for a more successful 2017 than 2016.

All the signs of summer are there now, and, with British bookings up and the Russians apparently flocking back to the Antalya areas, there’s a little bit of cautious optimism floating around.

Last week, Çalış Beach was cleaned up, and, this week, all the beds and newly painted umbrellas were placed along the shore. New information boards giving guidance about protection of the habitat for nesting turtles are also in place.

Of course, as it’s May, the lovely Çalış Water Taxi is now also up and running, toing and froing across the bay between Çalış and Fethiye.

Well, we’ve had Easter so we shared some of our favourite Turkish egg recipes. This time of year is also when the fruits on the market burst with spring colour.

Local Fethiye strawberries are flying off the stalls on the Tuesday market so we’ve been indulging in strawberry sandwiches.

We’ve also played with a new recipe that we’ll be putting on the blog soon.

So far, 2017 has been the year of playing with puff pastry recipes.

The most recent Turkish recipe on the blog is our spinach and potato puff pastry rolls. They’re so yummy.

And a little clue – our new strawberry recipe also involves this puff pastry, too. Watch this space.

Poor Barry has had heartburn galore as he samples our new creations. You can view all our other Turkish recipes, here.

Because people are starting to arrive for the summer season, now, we’ve been reminding people of all the things they can do in Fethiye while they’re here.

A visit to the fish market is always a must. And, for water babies, we added to our list of Fethiye aqua parks. Ölüdeniz Waterworld has now been joined by Sultan’s Aqua City in Çalış.

We’ll no doubt be spending the day in one of those places soon!

Since our last Fethiye life news update, we’ve also added to our ever growing bars and eateries page.

A celebration of all things meaty awaits you at Fethiye harbour’s Çarıklı Et Restaurant (we love it here) and, back to Çalış, Sarge’s Place is serving up bar food and local beer, Gara Guzu.

We’ve got lots more places to tell you about, too, in the near future – we’ll be writing about them in between playing out with friends who are over for holidays, which is always our annual summer challenge.

Two spring breaks to Antalya and, most recently, Bodrum put us back on our writing schedule, too.

No complaints there, though. We love our little jaunts and have started to tell you our tales from those places.

But Back To Life In Fethiye

We got back from Bodrum earlier this week, and in the morning, this was our view as we headed into town.

Always a lovely sight to return to after you’ve spent time away. We’re sure, as the summer progresses, we’ll have loads of tales to tell you from this little corner of Turkey.

So, we’ll not leave it too long next time before we update you again on random goings on around Fethiye and, in the meantime, all the usual blog posts of food (and drink, of course) and travel will be added, too.

We usually have a Facebook photo favourite at this point but let’s do Instagram for a while.

This photo of the 10th largest super yacht in the world – Ocean Victory – attracted a lot of likes. She visited Fethiye in April and stayed around for a couple of days, dwarfing all around her.

Apparently, she was in town to refuel for the start of her summer expeditions around these waters. So, all that’s left to say is, let the summer begin!