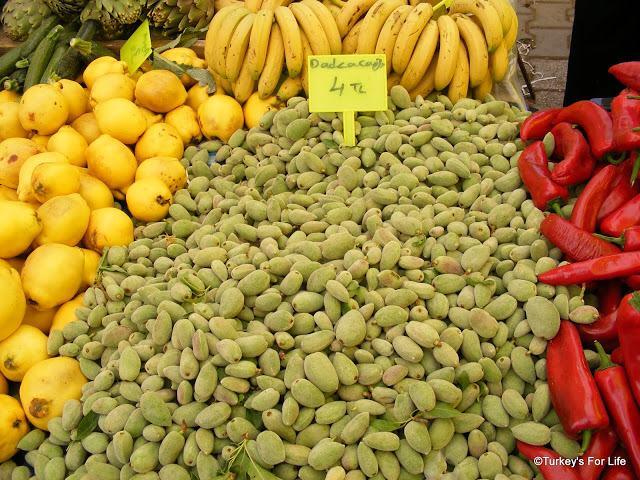 Have you ever eaten Çağla? Green (unripe) almonds?

Spring has been slowly appearing on Fethiye and Çalış market in the form of seasonal fruit and veg but this week’s Tuesday market in Fethiye was just a joy.

Most of the springtime produce was in evidence and in abundance. We loved it because a new season has started and it was visible.

So, what delights does Spring throw upon us on the markets of Fethiye?

Well, the first fruit we want to write about is çağla and we’re curious: is it only Turkish people who eat these things?

I remember being given one during our first Spring in Fethiye and I just thought it was bizarre when I was told what it was. Çağla is an unripe almond.

As you can see from the photo, they are about the size of a big grape and they’re green and furry. When you bite into them, they taste – well, they taste unripe.

Don’t go expecting a nut or else you’ll be disappointed. The almond is yet to mature.

I’m not sure if they’re used for anything else apart from something to nibble on. We were eating them on Sunday at the Üzümlü mushroom festival.

It probably isn’t wise to eat too many in one shift – maybe stomach gripes later – but to eat a few is to feel like spring is definitely upon us and the weather in Fethiye is warming up.