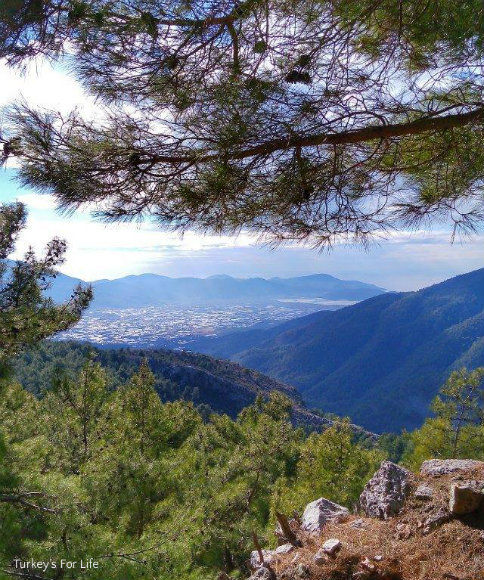 Wow! If you’ve never made it up to the ancient settlement of Cadianda (Kadyanda) and you like a bit of trekking, panoramic views over Fethiye and the Xanthos Valley, and the odd Roman ruin to boot, you’ve got to get yourself up there!

We’d lived in Fethiye for quite a while before we first ventured up the hillside from the village of Üzümlü to explore Cadianda (the site’s Turkish name is Kadyanda). Amazing, the sites that are right on our doorstep and yet to be discovered – we’ve still got so much to see. That first trip was a little jaunt; a break in the day whilst we were enjoying the Üzümlü Mushroom Festival with friends. These days, small as it is, the site of Cadianda is one of our favourite places to wander.

Let’s show you around Cadianda and you can decide if you agree with us.

A Bit Of History & Context

After you’ve climbed the mountain track – either by car or on foot – an information board in the small car park at the entrance tells you that this site was a settlement from as early as 3000 BC and it was also known to the Lycians as Kadawanti.

The ruins that you’re going to see as you wander and clamber through the forest, however, are from the Hellentistic and Roman period and date back to the 5th Century AD; relatively young, compared to UNESCO-listed Turkish sites such as Letoon and the rock tomb of Amyntas. We’ve got a lot of history in this area.

What you don’t come to Cadianda for is to get an impression of how an ancient civilisation used to live. No, it’s not like that up here. The site hasn’t really been excavated and many of the ruins protrude from beneath the earth, buried under mounds of mud and who knows how many years’ worth of  fallen pine needles.

Cadianda’s remote mountain setting, the deep forest that guards it and the fact that there aren’t many intact ruins make it all the more enchanting. Once away from the car park and walking amongst the trees, our friends even described it as feeling a little bit eerie – whilst loving it at the same time, of course.

Probably quite fitting then that as you follow the path, the first clues you get that you are walking through an ancient city is the ruins of the Cadianda necropolis. Ahh, we all love a good burial ground to add to any feelings of eeriness.

Don’t expect lots of shiny information boards to inform you of these tombstones. Knowledge of this site is scant. Visitors are relatively few. On our most recent visit, it was just our little group of four friends and we came across another couple towards the exit. It’s serious bliss!

Archaeologists the world over must be itching to get to work, discovering what lies underneath this forest floor. It almost feels like Cadianda is begging to be put on full view. But for us, right now, we can just enjoy the mystery of the setting whilst also getting in a good leg stretch.

Keeping to the footpath is important at Cadianda as there are lots of deep cisterns and other underground areas, as you can see in the photo above. Some of these areas are taped off for your protection but others aren’t. If you’ve got small children or pets with you, keep them with you at all times. And you’re on a hillside, too. There are short stints of climbing and descending to be done, through the forest trees.

That’s why we’ve got the exploration of the Cadianda ruins on our walks around Fethiye page. You could do with some sturdy shoes or trainers on for coming here. Uneven ground and rocky areas as well as some steep ascents (albeit short) and descents. But don’t worry, your efforts are very well rewarded.

From the necropolis, the path is a bit steep and rocky here, but it leads you up to the Heroon. All that’s known about this structure is that it was a temple or a sanctuary from the Roman era, dedicated to an unknown deity. It’s pretty substantial; broken columns and pillars littering the ground beside it.

You can take a few minutes mooching about around this area and also enjoying your first big reward for your short climb. There are stupendous views from the Heroon.

On a clear day, the eye is led across vast forested hillsides and over to the Xanthos Valley. Look very carefully and you can just about make out the ruins of Tlos and the telltale shadow on the hillside – that’s the famous Saklıkent Gorge. In winter – as in this photo, above – you also get the added bonus of snow topping the rugged Akdağlar mountains.

If you’ve brought a picnic or snacks with you, this Heroon area is no bad place to take a few minutes and feel that all is well with the world.

As well as the views out across the Xanthos Valley, an about turn also gives you views back towards Fethiye, too. It’s a really interesting angle of the town and takes a moment or two to get your bearings, working out what’s what. Anyway, time to press on.

The stone-marked footpath continues to lead you round the site and this particular section packs your senses with these fantastic views. Don’t forget your camera! Cadianda is not massive but it’s rammed with tranquility, interest and intrigue. If you just walked straight round it, you could be round in about 30 minutes but it’s really worth taking your time.

The path leads us back into the forest, uphill again, and past the agora of Cadianda. Hmmm, even the best of imaginations would struggle here. The agora at Xanthos, for example, is obvious. The agora is usually one of the most intact sections of any Roman site.

Yes, well, this is Cadianda and we’re here to enjoy the forest and the views as much as the ruins. It looks like the forest covered this hub of the settlement some time ago. What lies beneath those trees and pine needles, eh? A good few stories, that’s for certain.

As we continue up the hill, you’ll be able to see the bath house sitting on the edge of the hilltop. And, a rarity for Cadianda, we actually have a little bit of information about it. A recent find has revealed the building is from the 1st Century AD with money obtained from the city by Emperor Vespasian.

However, the information goes on to tell you that this structure is likely to be the bath house. That element of doubt again. It’s what makes Cadianda so interesting and mysterious. And you get another little breather here once you pass the hamam.

Once you’ve reached the top of the hill, you come out at the stadium where races took place. We guess the wide, flat forest path here is what was the race track. Rows of tiered seating are relatively intact and if you prefer shaded forest atmospheres to panoramic views, this is also a good spot for your picnic. In winter, the snow can fall here, as you can see.

From the stadium, it’s an easy walk through the forest once more; rocky ruins visible amongst the pine trees. You will also see what was the city’s cistern area. These are obviously very deep and it’s cordoned off as it is unsafe. There’s nothing on the surface to see, anyway, so just enjoy the forest stroll.

Next up is the Exedra. All that remains here is a walled area but if this was the place where people gathered for philosophical musings then who can blame them, eh? You can’t help but muse once you’re faced with this expanse! The views from here are vast; perfect for the panoramic setting on your 21st Century camera.

And then the path starts to head slightly downhill and you get the impression that that’s it; you’re heading back to the car park. Ahhh, but what a great surprise when you come to a steep drop, and there, through the trees, is what all good Hellenistic and Roman cities should have.

Well, it just wouldn’t be the same, would it, if there wasn’t a theatre? And, compared to the rest of the ruins of Cadianda, the theatre is relatively intact. This is probably because it sits on steep hillside and so had to be repaired numerous times; slipping and sliding during earthquakes.

Clamber down the steep path that runs by the side of the Cadianda theatre, and, if you fancy a bit more exploration, you can go inside and have a mooch around. As well as the stadium, the theatre is probably the main ruin that allows your imagination to go back in time and get an image of life at Cadianda.

The City Walls Of Cadianda

And now, it’s time to head back to the car park. Pass through the entrance of the ancient city walls and take a moment to notice the Hellenistic structure. Apparently, the stones are shaped like this so that the wall didn’t need any mortar to hold the walls in place.

We’re no structural experts but the shape of these rocks that make up the Cadianda city walls did make us stop to take interest for a short while. Amazing how they tessellate and we can’t begin to imagine how long this must have taken to construct, all those centuries ago.

It’s just a couple of minutes back down the hill now and you’re back at the car park. Now, you either drive away or, if you came on foot, you can continue your hike and wander on back down to the village of Üzümlü.