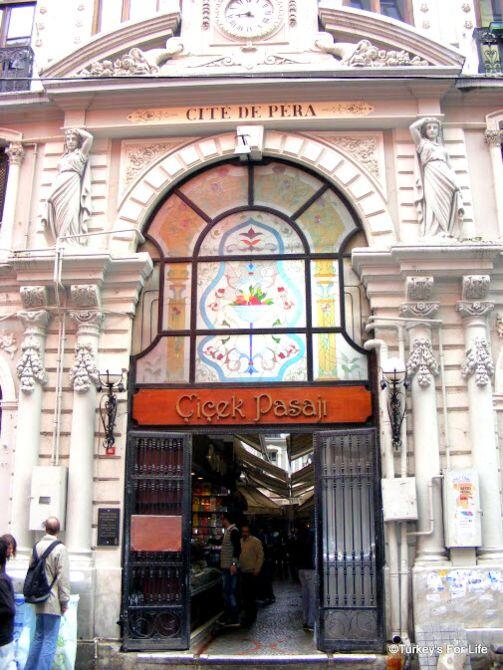 Ever heard, or even said, the phrases, ‘It’s full of tourists. I don’t go there. It’ll be too expensive.’ Well, if you skip these places, you could well be missing out, as we found out when we went to Istanbul in October.

This is a photo of the famous Çiçek Pasajı (Flower Passageway) along Istiklal Caddesi. The first time we went to Istanbul, about six years ago, we had a walk through Çiçek Pasajı as it was on our list of Istanbul must-sees. We’d been advised not to eat or drink in there because ‘it was touristy and over-priced,’ by friends and by one of our guidebooks. Ever since then, we’ve walked past the beautiful Çiçek Pasajı and never really given it a second thought. ‘Lovely as it is, we’ve seen it – no need to go in there again,’ was our thinking.

However, being that we write a blog about Turkey these days (had you noticed?) we decided to stroll through the building just to grab a couple of photos of the interior. We went in through the rear entrance and walked down, towards Istiklal Caddesi, ignoring all the empty ‘expensive’ restaurants and I took a couple of photos. Now, if you read this blog regularly (or if you know us), you’ll know we’re no strangers to the odd Efes Pilsen every now and then. Exploring the delights of Istanbul is thirsty work and we’d been wandering around for most of the day…

This place is a people watcher’s delight. We were in our element. Obviously, people from all over the world visit Istanbul and Çiçek Pasajı is on most of their ‘must see’ lists. Into the passage the people strolled, gazing up at the ceiling, pointing out different areas, videoing and photographing the beauty of the building…and out they strolled, straight back through the way they came in.

I can only think that Çiçek Pasajı has become a victim of it’s own beauty and fame. It has a reputation for being over-priced and maybe tourists avoid eating and drinking there because they believe it to be expensive. (It was expensive in the past.) But, judging by the price of our beer, maybe the over priced restaurants are no longer over priced. We sat at our little cheap bar – fantastic surroundings and a people-watching bonanza – for an hour or so and a quick photograph snapping session turned into a very pleasant (and cheaper than expected) afternoon, enjoying the delights of Çiçek Pasajı.

And the moral of the story? This is Turkey. Assume nothing and explore everything…you could miss out otherwise.