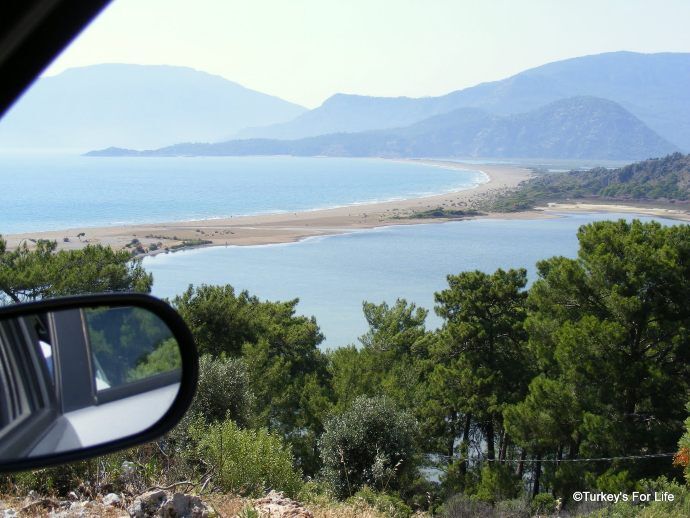 A couple of years ago, you may remember we went to Iztuzu Beach near Dalyan to watch the release of Özlem the loggerhead turtle back into the wild. A few weeks ago, while killing some time before dropping friends off at Dalaman Airport, we returned to Iztuzu Beach because these friends wanted to see the turtle rescue centre we had told them about. We’d hired a car so the journey was a minor detour.

After taking a left before you hit the centre of Dalyan, you climb a narrow road through the village of Gökbel and past Sülüngür Gölü (göl means lake and you could easily spend an afternoon picnicking by the roadside here or sitting at one of the little lakeside restaurants. We intend to at some point!).

Eventually, as with many of the amazing sea views in Southwest Turkey, you come face to face with a sweeping, panoramic scene set out before you. This is Iztuzu Beach (often referred to as Turtle Beach) and it demands you stop the car to take photos.

We can’t remember how much we paid on entry to Iztuzu Beach but know that it wasn’t too expensive – we would have remembered very clearly, otherwise! The Sea Turtle Research, Rescue and Rehabilitation Centre is clearly signposted and is situated in understated shacks along the forest path. It’s smaller than you’d expect but definitely worth a visit. Why?

Because volunteers from Pamukkale University will introduce you to turtles like Deniz. When we were there this time, there were only two turtles in the centre and one of them didn’t look too well.

He was floating, seemingly without life, just under the surface of the water. We asked one of the volunteers about it, thinking she was going to give us the sad tale of the demise of this turtle.

But no! Meet Deniz. A gash along his shell from a boat propeller (unfortunately very common in this area of Turkey) and a semi-severed front flipper from fishing line (again, a common problem) are healing slowly and they’re hoping to release the beautiful creature that is Deniz the Turtle later on this year.

I know we’ve mentioned the turtle rescue centre in Iztuzu in the past on this blog but it’s such a special place to visit – and now, they’ve achieved their foundation status. This means you can leave your donations in the box (in the shape of a turtle of course) as you leave.

We love to watch the turtles frolicking in Fethiye harbour and seeing them in the Dalyan centre with their injuries is very sad…but also hopeful…so I guess you can expect another blog post about the Sea Turtle Rescue, Research & Rehabilitation Centre in the future, next time we go…