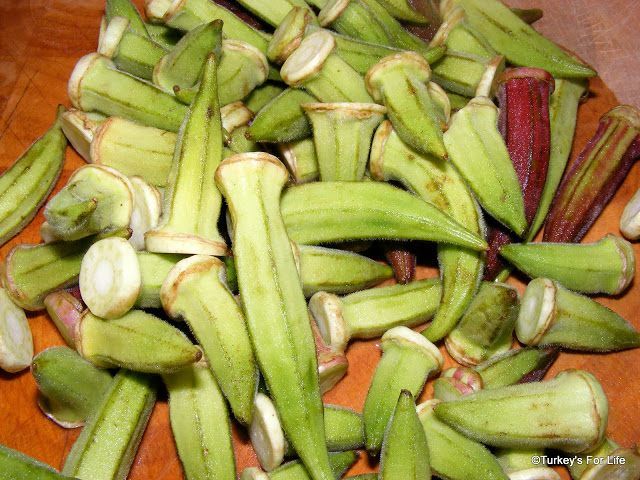 In July and August in Fethiye, okra is in its prime! We love the Turkish word for okra: Bamya. It’s just got a nice sound to it…but that ‘nice sound’ was all it had until we conquered our okra fear.

Despite a plethora of okra health benefits, poor old ladies’ fingers are not well loved by the masses out there and we were once part of those masses. Okra season could come and go as it pleased as far as we were concerned – it was for others to enjoy. Have you ever tried it?

You see, a few years ago, we tried okra as part of our love of buying all-things-seasonal from Fethiye market. We’d never had it before and, as is the norm with us, we bought half a kilo, got it home and only then did we look in our recipe books to see what we could do with it.

We opted for an Indian dish, cut the okra up, cooked it as the recipe instructed – and the result was a slimy sauce with a gluey stringy stretchiness to it. The dish tasted great but neither of us could eat it – it just looked so, well, slimy.

And then, more recently, we were at a Turkish friend’s house and her mum popped round for a visit, bowl in hand. Off she went into the kitchen, shared out the contents of the bowl between four plates and handed us the food, smiling.

It’s rude to refuse these generous offerings in Turkey…even when you realise you are being handed a plateful of your dreaded vegetable, served in a sauce. Eek, slimy okra; a full serving of the stuff!

Except, when we started eating it, we realised the okra wasn’t slimy, at all. And it was a really tasty Turkish vegetable dish in a sauce we were familiar with. We’d just enjoyed the health benefits of okra, cooked the Turkish way, and we knew then that we no longer needed to fear the slime of okra.

I should point out that this stage that not everyone stands back, aghast at the sight of okra’s oozing mucilage. No, lots of people love the stuff…it’s just that we fall into that other camp of let’s-just-pretend-it’s-not-there.

July and August (yes, in the Fethiye heat) are usually the months we are doing our very best to get into shape, lose weight, get healthy and get fit for running events such as the marathon or 10k in Istanbul and fortunately, we’ve got ridiculously healthy foods like okra to help us along.

Yep, the health benefits of okra are numerous and at times like this, we can’t afford not to be eating it. Seasonal food forces you to make the most of it and these two hottest summer months are where we make the most of eating our once dreaded vegetable, okra.

So, what are the okra health benefits that make it worth playing around with different recipes? Most of us are aware of the term ‘super foods,’ these days and okra is fast gaining a reputation as one of those foods because it is fantastically good for you and offers lots of plus points in learning to love it! Okra health benefits include, for example:

There are many other okra health benefits that could persuade you to love these little green pods and if you’re feeling keen to try it but not sure what to do with it, you could do as the people of Turkey do and make a summery Turkish okra in olive oil dish. That’s what we do with it, anyway.

Thank you, Turkish cuisine! The okra health benefits are primarily in the mucilage of the pods and this Turkish okra recipe keeps in all that goodness…without forcing you to deal with slime.

So which camp do you fall into? Are you an okra fan or is it just a big no? And what about the mucilage – do you make the most of it, or pretend it’s not there?