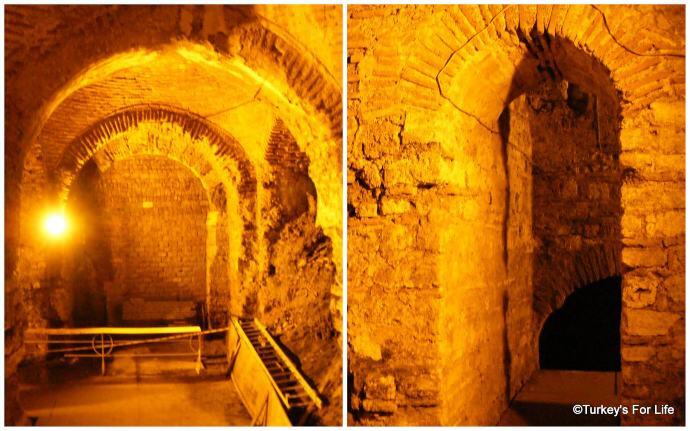 It’s little wonder that every time we walked past Palatium restaurant in Sultanahmet, it was a packed.

Howling wind, driving rain – and a huge floor-to-ceiling, wall-to-wall window radiating a warm, inviting glow to the outside world.

We were two of its very regular customers whilst we were in Istanbul in October, as it was only a few doors down from Antique Hostel & Guesthouse where we stayed.

And they were serving large bottles of beer; a treat we have never found previously in Istanbul!

We’ve eaten there many times and never been disappointed.

Their pide is particularly good! We love the pide topped with Turkish sucuk.

It’s one of many establishments in Sultanahmet serving the masses of tourists who are here to visit the Blue Mosque and Hagia Sophia amongst other attractions.

At first glance, all appears normal. But not everything is as it seems in this restaurant.

In fact, from frequenting this building, we realised that not everything is as it seems in Sultanahmet.

We’d been in Palatium twice before we noticed a section of floor made from reinforced glass – it had been obscured by floor cushions on our previous visits.

Not being one to trust reinforced glass, I peered down from a safe tile-floored distance while Barry stood directly above the emptiness below.

The waiter came over and told us that the building’s owners had discovered this underground world and had excavated it themselves.

‘You can go down there if you like,’ he said and pointed to some steep, iron steps in the rear courtyard.

We liked! Off we went, ignoring the wind and rain.

Underneath this restaurant, and the roads and pavements of much of Sultanahmet, is an underground world of brick arches and tunnels.

Even in this small excavated area, it’s possible to see further pathways, still blocked by earth.

A rabbit warren of tunnels that must have linked up to serve this area of Istanbul at one time.

And then we heard voices. Where could they be coming from? We were the only people down there.

We ducked our heads and went through an archway towards where the voices were coming from.

A group of tourists were stood listening to a guide as he explained about the mini maze of corridors.

It’s thought that if they ever get fully excavated, this particular section of tunnel will eventually lead to Topkapı Palace, formerly the Great Palace in the Byzantine era.

We listened for a moment, fascinated – and then remembered that we were supposed to be the only people down there.

Where had these people appeared from?

Barry disappeared round the corner and through another archway and immediately bobbed his head back round, grinning.

“You’ll not believe this. Come and look at this.”

I followed him and we entered into a smaller chamber.

A chandelier hung from bare rock and a tall plant obscured a doorway – a doorway into a completely different restaurant!

We were about 15 feet below our restaurant. We could see the customers sitting on beanbags on the reinforced glass above our heads.

We found out that this restaurant is Albura Kathisma Restaurant – this is where the tourist group must have appeared from – and it has its entrance somewhere round the corner from Palatium on Akbıyık Caddesi, down the hill.

It was as though the people dining in the restaurant had no idea we were there, spying on them.

Maybe they didn’t. We felt invisible. How exciting. How completely weird.

And definitely one of the unexpected highlights of this year’s trip to Istanbul.

It certainly wasn’t on our Istanbul itinerary!

We sloped away unnoticed, through the archways and back upstairs into the other world from whence we came.