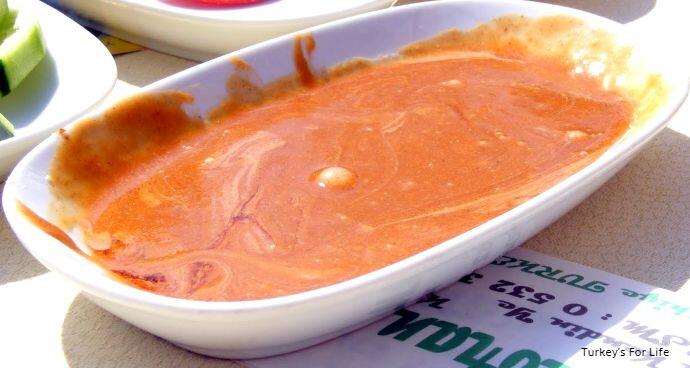 When we moved to Turkey in 2003, we were introduced to a whole new world of unfamiliar ingredients and we soon realised our new life in Fethiye would be much easier if we learned all about them.

One of these ingredients was (and still is, of course) a thick, beige, emulsion-type paste that we would see all the time on the shelves of shops in supermarkets. A murky, brown gloop sitting in the bottom of jars and stumpy, plastic bottles with an inch or so of oil resting on top.

What on earth was this? Well, on the labels, it said ‘Tahin.’

We’ve since found out from our English foodie-interested friends in the UK that this paste is in fact tahini – if English is your language that is. And while English is our language, for us, tahin is tahin. And if Turkish cuisine is your interest, you need to make yourself familiar with tahin (sesame paste). It pops up everywhere.

The Joy of Tahin

The first time we came across tahin (tahini) in a dish was when we had Antalya Usulü Piyaz in a tiny lokanta in Korkuteli, on the road to Kaleiçi in Antalya.

Of course, we didn’t know it was tahin at the time, but when you’re staring down at a bowl of white beans and pieces of hard boiled egg floating in a gloopy, white sauce, the discovery of tahin is the last thing on your mind. (Don’t worry. Click the link above and you’ll see we immediately came to adore piyaz!)

The only other time we’ve felt the need to buy a bottle of tahin is when we’re following our Turkish recipe for hummus, usually when we’re doing a barbecue for friends in summer.

And the reason we’re mentioning this is, these days, when you go into the supermarkets in Fethiye, plastic bottles of tahin are very often sold in a twin pack; a bottle of tahin and a bottle of pekmez (grape molasses) bound together with tape.

Yes it did make us wonder why these two gloopy goods were sold together in Turkish supermarkets…but only in as much as it made us think, “Why are these two together when all we need is the tahin? What are we going to do with a bottle of pekmez?”

And then we went to Kayaköy last Sunday for a Turkish village breakfast with friends. Various plates of goodies were placed on the table (as is the norm) and amongst these was a plate of tahin and a plate of pekmez.

No sooner were they put down than hands reached for the plates and the pekmez was poured into the tahin and the mixture stirred rigorously (see photo above).

THAT’S why these two are sold together in supermarkets. Dip your fresh, still-warm breakfast bread into that mixture, pop it into your mouth and savour! A perfect Turkish breakfast dip!

And, if that wasn’t enough, at the same breakfast sitting, it appeared our friends wanted to prolong the day by playing Okey and Tavla (backgammon) with a source of nibbles to keep them going.

We might have been completely full, but this was labelled as ‘dessert‘ – and ‘dessert’ was a rather hefty tahinli böreği. It doesn’t matter how long you live in a country, there is always something new to learn…

…and tahinli böreği was most definitely a new one on us. No complaints here, though. However full you are, if you ever get the chance to sample this, don’t refuse.

It’s sweet, it’s savoury, it’s exactly what you don’t need when you’ve just eaten your way through a köy kahvaltısı – but layers of börek, separated by a thin spread of tahin, just yes!

We got through a few of these between us throughout the day.

We’ve mentioned four different uses for tahin (tahini) in this post. Do you know of any more recipes that require tahin?