A story of how we came to love the famous Turkish white bean salad, piyaz.

But this is not just the regular white bean salad you see all over Turkey. We have an obsession with a special regional version, you see.

This is the story of the discovery of Antalya Usulü Piyaz (Antalya-Style White Bean Salad) and our subsequent piyaz recipe that is a staple in our house.

When we first moved to Fethiye, you had to fly to and from Antalya airport in the winter months. In that first year, a friend was coming to visit us so we went with the transfer driver to the airport to pick her up.

About half way there, at the top of the yayla mountain road between Fethiye and Antalya, is a town called Korkuteli and we stopped at a tiny lokanta there for some food.

We trusted the driver to order our meal as we had no Turkish at the time and menus were non-existent.

When our food came, we were presented with a serving of köfte and some ‘beans and egg in white sauce in a big bowl.’

It didn’t look too appetising and I tasted it out of politeness (Barry had already tried it on a previous ‘Antalya run’ and was raving about it).

Immediate convert! Wow, it was good!

We’ve both had a piyaz obsession ever since.

These days, the D350 road bypasses Korkuteli centre but there are still eateries on that main road serving this special bean salad with köfte.

It’s a highlight of any trip to stop and eat on your journey.

Antalya Piyazı – A Dish Of The Province

You would think, wouldn’t you, that the piyaz of Antalya would be served in just about every eatery of Antalya city centre.

Ahh, well, Antalya is a province of Turkey, too, and piyaz tends to pop up in the more rural places of this area.

One year, we were on a big hunt for köfte piyaz in downtown Antalya and were drawing a blank.

Eventually, a waiter told us we needed to get ourselves to Aksu if we wanted the real deal.

Aksu? We’d bear that in mind for our next visit to the city.

And – happy days – since that time, our annual jaunts to the actual city of Antalya have revealed to us a historic kebab place right in the centre.

Allegedly serving up this fine dish for almost 150 years, Topçu Kebap will satisfy any köfte piyaz craving you may be experiencing.

It’s our first stop off every year.

But let’s get back to Aksu; a town that is apparently the capital of köfte piyaz – prepared the Antalya way, of course.

Why are you going to make the effort to be in this little area? Well, the airport is round here for starters.

But you can also make a great day out, like we did one year.

Get on the tram to Aksu, go off and explore the fabulous Perge archaeological site and then amble back down for köfte piyaz.

Seriously, there were three of us on our little Perge jaunt.

We were walking back down towards the main road to head back to town and, despite not being particularly hungry, I said we just couldn’t waste this opportunity to sample what is supposed to be the best piyaz recipe.

Ahh, this is what Turkey is so good at. Roadside places with no airs and graces, serving up the best traditional dishes.

If I remember rightly, Şimşek Köfte Piyaz also served soup, but, apart from that… And no one offered us soup.

The waiter came over, placed hot pide bread on the table and a bowl of piyaz; the white beans and egg peeping through the emulsion-like soupy sauce.

Then the grilled onion, pepper and köfte arrived. It arrived served atop even more hot pide bread.

Forget what we said about not being particularly hungry.

Nothing fancy about this meal. Agreed; it doesn’t look particularly appetising.

But thank you to that waiter who told us all those years ago to eat piyaz in Aksu. We all agreed, it was the best!

More memorable than Perge, even? Hmm, don’t make us decide.

After that first Antalya trip and the memorable stop off in Korkuteli, I followed many Turkish white bean salad recipes. They were good.

They were the traditional Turkish piyaz servings we’ve since enjoyed on our travels in places such as Köfteci Ahmet in Eskişehir and Edirnekapı in Istanbul.

A dressing of vinegar and olive oil. Yeah, they were all good. We love the stuff.

But it wasn’t the piyaz taste we’d found in Korkuteli. What were we missing?

A few years later, after I had experimented with more Turkish cuisine and familiarised myself with different flavours, we went through Korkuteli again.

We went to the same lokanta and ordered the same food. Got it!

The piyaz prepared in the Antalya province has tahini (sesame seed paste) mixed into the sauce to make an emulsion.

How much or how little tahini you use is down to personal taste. The Aksu version was, for us, spot on!

Anyway, especially in summer, this yummy white bean salad recipe is a staple in our house.

A few homemade köfte under the grill or on the barbecue and we’re good to go. Here’s our piyaz recipe, influenced by the Antalya Province – Antalya Usulü Piyaz.

You will notice a difference in the look of our piyaz recipe to the piyaz served in the eateries around the Antalya Province.

Aside from the fact that we like to make ours look pretty for when we have friends over for food, we also like to try and look after our waistlines a little.

If we’re in the eateries, who cares about piyaz calories, eh? We’re there to indulge!

Really, the more soupy piyaz dishes are so tasty and this is how Antalya piyaz should be served.

But, at home, we aim for more of a bean salad. Easy-ish on the sauce.

Now, let’s get that barbecue fired up and set the köfte sizzling! We love it with Tekirdağ Köftesi.

By the way, if you’re vegetarian, then köfte is obviously not going to float your boat, is it? We’ve played around in the past and piyaz tastes great in a baked potato!

This is far from traditional but when you see the multitude of fillings added to the famous street food, kumpir, a bit of white bean salad in your spud can’t do any harm, can it? 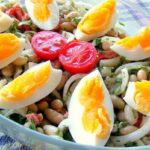 @ cicek: Only just seen this comment, sorry. Really hope you get to come to Turkey to live some day, if that's what you want to do. I bet it is the same lokanta in Korkuteli! :)

@ Lisa: You don't see it in many places. Lots in Istanbul and in the villages around Antalya. So yummy. :)

I really loved the food in Turkey, but I am not sure about this one. I guess I will have to try it on my next visit.

Hello I just found your blog today. I spent about 6 years living in Akdeniz Turkey on and off and feel very nostalgic about piyaz made antalya-style! I've just tried to reproduce it (not entirely successfully). I too have very fond memories of eating kofte, mercimek corbasi and piyaz in a little hole in the wall in Korkuteli, I wonder if it's the same one? I still dream about retiring to Turkey (when I'm 68?). I shall be looking for more of your recipes!

@ Renee: Yes, it's really easy to make so hope it works out for you .Shouldn't take too much space up in your camper! :) You can also do this with barbunya beans which are out on the markets at the moment. Good luck.

We're in Turkey right now, rambling around in our camper.

Thank you so much for posting this recipe. It looks absolutely fantastic but also doable in my tiny camper kitchen. Think I'll give it a go because I need to start feeding the family something besides frozen kofte, pide, tomato salad, cheese and yogurt!