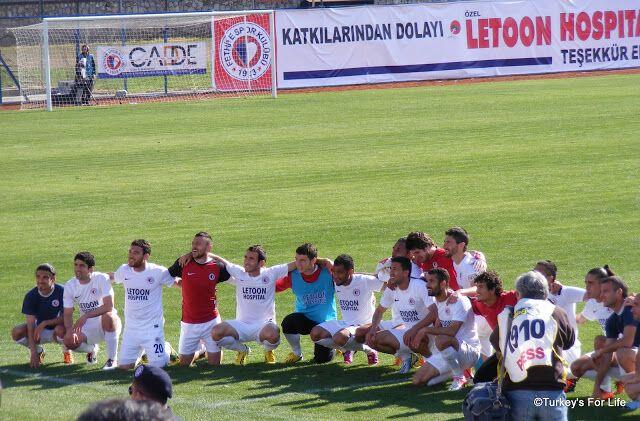 It’s the 80th anniversary of Fethiyespor Football Club and the match is being aired live on Lig TV; the first time the club have been shown live on the channel.

A carnival atmosphere is expected as an online campaign has been rallying supporters and tickets for two of the three stands are given away for free.

A big push has been made to attract more yabancılar (that’s us foreign folks) to the game, so these two yabancı decide to go, along with another friend.

What happened:
We get there early because we’ve heard it’s going to be a big crowd. We choose the free seats over the 10 TL main stand seats.

We’re novices, we’ve never done this before, and are pleasantly surprised to find we can sit, for free, on the half way line, close to the front.

There are a few fans already there, grouped, organised, jumping, singing, chanting – so we choose the block of seats just to their right.

This might be our first experience of Turkish football, but we’re both well-versed in the stadium crowd experience.

As a youngster, Barry used to go watching Wigan Athletic when they languished in the old 4th Division.

And from the age of 11 up to going to university, I followed Wigan Rugby League home and away.

We’re knowledgeable (we assume) and happy that the block of seats just to the right of the chanting youths is close enough for atmosphere but far enough away not to get caught up in it all.

A huge Fethiyespor flag billows in the stiff breeze.

The weather gods have been kind, it’s a sunny day and the stands are filling up quickly.

The scene is set. And it’s the perfect setting for Fethiyespor 80th anniversary celebrations.

The teams come out to warm up – we can’t help but think Fethiyespor’s warm up resembles a series of coordinated dance moves with high leg kicks and claps.

We’re all (novice) eyes and ears today and loving it!

As the players near the group of chanting fans, the singing gets louder, the group become more animated.

And we notice the players acknowledge the fans. Impressive.

Is this the norm at Fethiyespor / in Turkish football?

We don’t know, but it’s noticed by us Brits, nonetheless.

We’ve sat ourselves next to the Apaçiler (Fethiyespor fans are named after the North American Indian Apaches).

We’ve seen this name many times over the years.

And now, here we are, sat right next to them…at a Fethiyespor match…and we soon realise we’re not going to get away with it lightly!

Enter the ‘conductor.’ It seems that we’re all here to follow his lead, and it’s not a choice.

There is a football match underway (see photo above) but that seems secondary.

We soon find out that this bunch are here to be vociferous and they’re going to make sure the rest of the crowd follow suit!

We are the flock. (Each club has its own tribün (stand) leader.)

We thought he was standing on the fence at first but it seems whoever stands here has his own little platform.

He works tirelessly throughout the first half, conducting proceedings around the whole ground:

Fethiyespor score the first goal, much to the obvious delight of the crowd. Random cheering’s okay for that one, it seems.

A while later, Tarsus equalise and our leader sets to work, finger to lips.

Everyone falls silent. Let’s not acknowledge that goal.

The animated actions of the stand leader make it difficult to watch the match, anyway. He’s on stage and he’s got his audience.

The second half comes.

And here’s the thing: as football goes, most of the second half wasn’t much to write home about. Fethiyespor didn’t look too hot.

A British crowd would have been getting a bit miffed by now, calling out to the team – we all know the standard phrases.

But this doesn’t happen here. It may be that we’re all too busy singing and chanting to notice.

One thing we do know is that we’re over 45 minutes into this game now. And we’re getting good at this Turkish chanting lark so we’re not too bothered for the moment.

Şimşek Gol Gol Gol (Lightening goal) is chanted during the second half.

The chant is needed, as is the lightening goal. Fethiyespor don’t want a 1-1 draw on their 80th anniversary.

Regardless of events on the pitch, chanting continues unabated – and how all the coordination comes about isn’t quite clear. But all of a sudden, we’re shouting:

Lacivert (Dark blue). Our leader holds left hand towards our stand to quiet us while turning to the opposite stand to raise a:
Beyaz (White)

Throughout the second half we sit for a few moments and then we’re gestured to stand while opposite stands exchange chants.

Our leader faces us, the opposite stand, the stand behind the goalposts, he (not surprisingly) loses his balance on occasion and very occasionally steals a glimpse at the match.

After each set of exchanges, we all applaud each other. Well done us!

And it does sound good. It does look good. It’s all good fun.

Errrm but aren’t we supposed to be watching the football match?

Not to worry. More singing to be done.

All of us are standing.

A deputy leader is sent to our bank of seats (there’s obviously concern that our energy is waning) and there’s a strained look on his face. And an ‘Uff yaaaa’ as he clambers onto the fence to gee us all up.

It appears this leadership job is high-pressured work. And the deputy goes back to his original post, not too happy with our efforts.

But then, just as it looks as though 1-1 is going to be the final score, Fethiyespor somehow score (they never looked like scoring from what we managed to see of the second half).

A few minutes later, a minute or so before the game finishes, they score again. A perfect ending for an 80th anniversary.

As soon as the final whistle goes, the usual handshakes are made. And the team come straight over to applaud the fans and get together for photos.