There’s a few places we like to take friends to visit along Çalış Beach, and these are also places we like to visit randomly whenever the mood takes us. Fethiye Surf Centre has been a constant of our time around those parts. Before other places popped up, we used to go to that area with a friend in her car.

After the end of Çalış Beach, that was it. End of road. The car would crawl along the pebbled beach track, made firm because of people passing through it, but in winter it was often impassable unless you had a 4-wheel drive. The puddles would be sea ponds.

We would be going to Birlik (which is now Mekan) or further along to Karataş to make a beach barbecue.

And the only other business we passed on our way there was Fethiye Surf Centre with its logo, ‘Children Of The Wind.’ We all used to talk about the name. We liked it. “A surf centre or something,” our friend told us. We all just liked it, it felt good, a nice idea, a great name. But it was just a passing point.

Let’s just stress, none of us are potential windsurfers / kitesurfers – although Barry does ponder it occasionally, and the day will come, no doubt, when he just decides today’s the day. 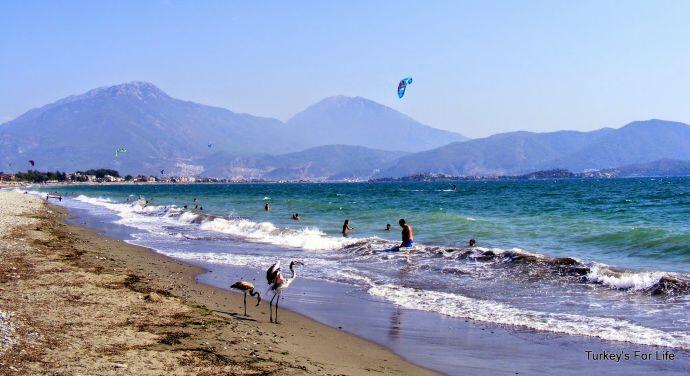 Watching the kitesurfers in Koca Çalış

So, this photo is taken from Mekan (previously Birlik), last summer, when we were there with another friend. That was when we wrote a post about our happiness at the sight of the baby flamingos (as you can see in the photo). But what you can also see in the photo are the kitesurfers.

Add a bit of breeze to Koca Çalış (and there’s breeze much more often than not in summer for these parts) and you’ll see the kitesurfers. And we love to watch them. I even look a bit longingly at them and think, “I want to be doing that,”…and then I jolt back to the reality of it: me and water activities are just a no no.

I don’t even like the waterslides at aquaparks! Speed – water – underwater – errrm, no thanks. But the sight of them…the sight of them…it is exhilaration and relaxation all rolled into one. 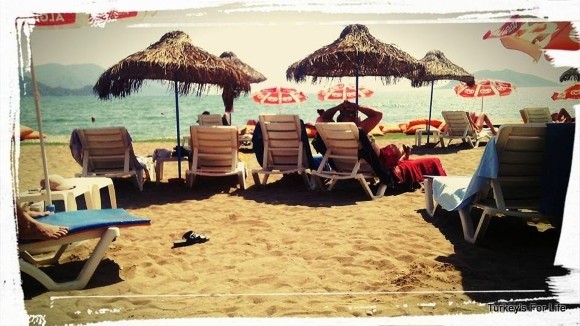 Chilling At The Surf Cafe

Now, if you know this area, you’ll know that since the days of Birlik being a little shed on the beach all on its own, things have changed. Apartments, hotels, new road – and now the Surf Cafe is the last Çalış dolmuş (minibus) stop from Fethiye.

This general area is also the stretch where the early moments of the James Bond film, Skyfall, were filmed. It’s a tad more arranged around these parts now as a result of this combination. Life…

But it’s still relaxed. You can still go there to chill. The ‘children of the wind,’ are still doing their bit, and the adjoining cafe and beach is a popular choice for sunbathers, eaters and drinkers.

We hadn’t been down there for a while but we decided to wander there last week after we read an interview with Taner Aykurt on the Fethiyespor1933 blog.

It turns out that Taner Aykurt and other family members are the founders of the business and run Fethiye Surf Centre (which is its main name). Taner is now in Gökova running the surf school there.

They’re a local Fethiye family and Taner is 6 times Turkey Freestyle champion – that thing where you do all manner of impossible looking things in the air with your board. Amazing how long you can live somewhere and have no idea…

Anyway, that’s what prompted us to head to that area of the beach last week. And we just lay on our sun loungers and watched.

We watched people having trial lessons on the beach and we watched more experienced kitesurfers ride up and down the coastline. It’s very relaxing. They’re a part of the Çalış scenery. Chill out with us by watching our short YouTube video…