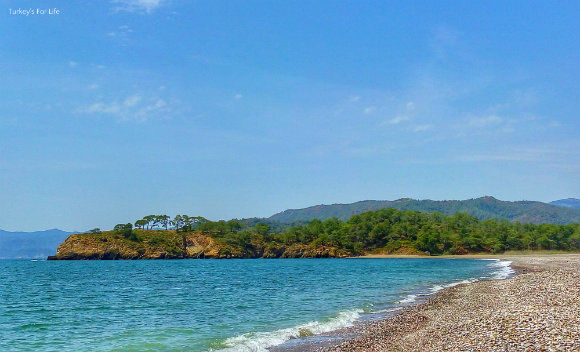 Whether it’s for sunbathing, taking a morning or evening walk – or just for standing and admiring the view, most of us love a good beach. And, when it comes to beaches, the Fethiye area certainly has no shortage – sand, shingle and pebble, small sheltered coves, the lagoon at Ölüdeniz or long sweeping, exposed stretches; take your pick. We all have our favourites and a recent new addition to our favourites list is Karaot Beach in the village of Yanıklar, just outside Fethiye, off the D400.

Heading out of Fethiye along the wide D400 road, it’s easy to pass by villages like Kargı and Yanıklar without giving too much thought as to what lies along the little side roads that sprout at perpendicular angles from the main highway. These days, because the D400 is a dual carriageway at this stretch, a right turn to Yanıklar must first be made to make a left towards Karaot Beach.

You turn back on yourself, meeting the river bed and following that under the D400 and along a narrow country lane. We’ve been here twice, recently; the first time after dropping my dad off at Dalaman – a little detour, making the most of our remaining time with our hire car. And, as we climbed higher along the road, what a beautiful scene that suddenly opened up before us. Lush greenery, fruit orchards and the bay beyond. Karaot beach waits just beyond the trees…

But Karaot Beach has a long standing plight. We’ve always known about the existence of Karaot because of this plight. And our second visit to the beach, recently, was because we were invited to a Mothers’ Day picnic which asked people to come together to both enjoy the natural surroundings of the beach and be aware of it’s special environmental features that need to be protected.

You see, Karaot has been earmarked as a venue for the new, much bigger, Fethiye boatyard. A place where boats and traditional gülets will be both built and maintained. Presently, the boatyard is at the end of the Karagözler in the centre of Fethiye and, for us, has always been an endless source of fascination. We love to watch the boat building and maintenance process as we pass by. Over the years, I’ve taken countless photos of the current Fethiye boatyard. Sometimes we’ve been lucky enough to witness boats being relaunched, too. It’s a part of Fethiye.

So, this is no ‘anti-boatyard rant’ on our part. It’s the highlighting a beautiful natural area of Fethiye – Karaot Beach. A celebration of that area, and, of course, we’re hoping, hoping that another solution can be found for the relocation of the current boatyard which is apparently causing pollution in the bay, outdated and too small…

Purely by coincidence, after our little post-Dalaman Airport jaunt to Karaot, a few days later we got invited to a Facebook event – Picnic At Karaot. A Mothers’ Day event but also a day for the kids, too. Karaot Beach would be used by local people for a bit of recreation, acknowledgement and support of the beach’s special status.

Part of the picnic event was a kite festival. We were going along with our friends and their two children. They were running late because they’d been to various Fethiye supermarkets in the hunt for kites. When they eventually found one, we got to Karaot Beach and, as we looked skywards, soon spotted that most other parents must have found their emergency-purchase kites at the very same supermarket.

Don’t Mind Doing It For The Kids

And what do you know about kites? The kids do a few minutes – excitement galore, boredom steps in…dad steps in, dad rediscovers lost youth. Barry and our friend – dad – had quite a fun afternoon rediscovering the joy of kites whilst the kids went off to play with pebbles and get wet feet from playing too close to the waves. Just the way it is, isn’t it?

There was a handful of handicraft stalls, fresh fruit juice for sale, servings of aşure and keşkek (a traditional wheat and butter dish that, we found, was very much an acquired taste – I’ve yet to acquire it). Kids had sack races, played with kites and pebbles, people wandered. The small cafe on the beach opened its doors for the sale of bottles of water and çay. There were beach facts posted around the area and leaflets were given out by the organisers explaining why Karaot is so special…

Why Is Karaot Beach So Special?

The information leaflet was, of course, written in Turkish. A guy we know handed us our leaflet, laughing.

He knows we can get by with our Turkish but he knew we’d only be able to get a basic gist from the leaflet on the day. I filed it away in the depths of my bag and have since deciphered the rest of the leaflet in more detail. Here’s just a few reasons from the leaflet about why a lot of people want to save Karaot and hope the new boatyard won’t be constructed here:

The go-ahead for the new boatyard has already been agreed and signed off by powers that be, so people have just been left with hope. And a bit of organisation and picnics, too. And hope isn’t always hopeless in these parts. People in the stunning natural area of Phaselis (Antalya) managed to get a halt to the construction of a large hotel there. And, if you know the Dalyan area of Turkey, the amazing Kaptan June will need no introduction. She and a very organised group of activists fight tirelessly to protect Iztuzu Beach and the surrounding areas against various developments. The courthouse in Ortaca must be a very busy place!

Karaot Beach is a 1 kilometre stretch of sand and pebble, washed up driftwood and pine cones. It’s solitary, peaceful, wild and lonely.  There’s a small wooden cafe, a few köşks along the boundary with the trees. Apparently, in summer, a few sun loungers, too. There are signposts to the footpath following the coastline, through the forest to Günlüklü Bay and ecotourism is alive and well in the area. The new dry dock and jetties will apparently take up 204,000 metres of land and sea in an internationally protected zone.

If Fethiye needs a new boatyard for building and maintenance then, of course, we hope that can happen. We just hope it can happen somewhere else other than this beautiful, natural and protected area. We’ve only just discovered this beauty of Karaot Beach for ourselves and we’d love to be able to continue to enjoy it in the state it’s in right now. Pretty sure the Caretta Caretta would agree, too…