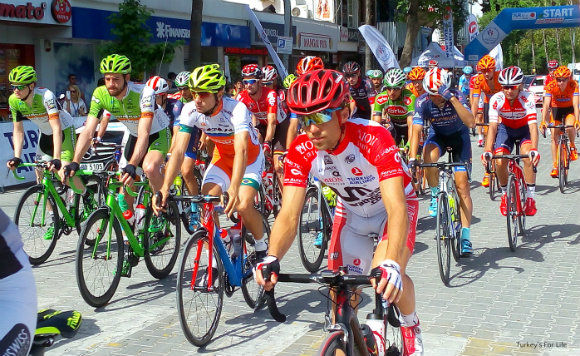 In April, we went to Bodrum for a few days for the Bodrum Global Run and my dad also came over to Fethiye for a week for his birthday.

He’s now left. And, all of a sudden, April is done and dusted.

This is the easy one because we walked up into the centre of Fethiye for the start of the Tour of Turkey on the last day of the month; Saturday 30th.

A perfect, warm sunny day to start off the riders on the Fethiye to Marmaris leg of the 52nd Presidential Tour of Turkey and a good turnout, too.

There were a good few people around the start line and no doubt lots more lining the streets along the way as the riders left tow and hit the D400, westwards.

In years gone by, we’ve watched the riders hurtling into Fethiye as they’ve completed a leg of the race but these days, Fethiye is a start point for one of the legs.

However the route happens, we always like to try and get there to cheer the cyclists on.

Well, they might be super fit and everything – but, let’s face it, pedalling up steep mountain roads is never gonna be easy, fantastic scenery or not.

We’re not going to pretend we’re road cycling enthusiasts or anything like that – it’s just great when they pass through your town – but, hopefully, the Presidential Tour of Turkey can keep its place up there.

Apparently, this year, there are fewer top tier teams taking part than previously.

There’s a number of reasons for this but competition from Tour de Yorkshire (in the UK) and a road race in Croatia are a part of this.

As we waved off the cyclists to applause and cheers, medics on motorbikes and in ambulances followed.

Everyone loves a medic – and they were loved even more as they waved the Turkish flag. Each ambulance had a flag, too.

From endurance sport to out-and-out Adrenalin.

If you’re scared of heights, sheer drops or the fear of free falling, you might be better off not pressing the play button on this video by Beşkaza TV.

There’s a certain type of person in this world who is just unable to function through life unless they’re throwing themselves off cliffs, down mountains, out of planes.

You know the ones we mean, don’t you?

We’re most definitely not this type of person, but, for the last weekend in April, Butterfly Valley played host to ‘those types.’

The World Base Jumping Championships took place there: basically, people threw themselves from a platform 300 metres above Butterfly Valley and released a parachute before hitting the ground.

Rather them than us – but each to their own. It all makes for a great video and no doubt the competitors loved hurtling face first towards one of the world’s most beautiful beaches.

There’s often events going on around the vicinity similar to this – both local and international.

Keep an eye on our events calendar for upcoming happenings if you don’t want to miss out.

Eek, this is supposed to be the bit where we tell you which of our Turkish recipes we’ve updated or which new recipes we’ve added to the blog in April.

Errrm, no recipe updates this month. But we did manage to cook up a recipe! Wild herbs and bulgur wheat was an early April treat.

So, we had to introduce family to Lukka bar in Çalış to see what they thought of the scampi there. Well, as we hadn’t had any scampi for so long, perhaps we were being excited over nothing.

But, happily, it got their seal of approval, so that was one success.

We also introduced them to Varil Bar along Çalış Beach but we’ll tell you about that in another post. All good, though.

Repeat visits included the restaurant at Kırkpınar where we ate very fresh trout (as in, netted from the water in front of us), Turkish village breakfast and saç kavurma.

My dad loved it here at Christmas so he really wanted to go again. And the food was just as good.

And, of course, we had to go to Cin Bal in Kayaköy. That’s always a given because my dad loves the barbecue and also the lamb tandır.

We also made a little trip to Göcek, too – one of those realisations that family have been visiting all these years and we’d never taken them to Göcek. Oops.

We put that right, though, and it’s okay to include it in this blog post as, officially, Göcek is now part of Fethiye.

Çalış Beach Restaurant for an Indian meal is also always on the agenda. And, as they stayed at Anna Apart Hotel, we also ate there, too.

Oh, a birthday Sunday lunch at King’s Garden, too, followed by live music at Cafe Pazar and birthday cake from Baba Fırın.

Phew, that’s a lot of eating out. Dad’s holiday spends always come in handy. Dads are good like that…

Oh, and in foodie news, big congratulations to Cin Bal.

In April, one of Turkey’s national newspapers, Hürriyet, included the restaurant in its Top 10 places to go for a barbecue in Turkey.

Many of the other suggestions are in Istanbul so this is a little bonus for Fethiye and Kayaköy.

Well deserved, too, in our opinion.

If you’re coming to Fethiye this summer, here’s a few suggestions of where to eat and drink around the area.

A 3-0 win for Fethiyespor’s last home match of the season followed by a 0-0 draw away brought Fethiyespor’s 2015-16 season to a close, finishing 10th.

All eventful as usual, with three different technical directors and the exit of a captain.

Throughout the season, we have faithfully kept a record of all 2015/16 goal scorers, league positions and results of each match in 2015/16. Click on the links to see those in their entirety.

On the Fethiyespor supporters front, 2015-16 also saw a name change for the supporters’ group.

Apaçiler became Beşkazalılar; they who hail from Beşkaza (Fethiye). More apt, we think.

The last week of April always sees the Çalış restaurants that were yet to open, open up their doors and the umbrellas appear on the beach.

Same for Belcekiz Beach in Ölüdeniz.

Still some bars and restaurants yet to open, but, by the end of the first week in May, they’ll all be in full swing.

Bars and restaurants in Fethiye town centre are open all year anyway, so not much change there, but the souvenir shops of Paspatur are now all up and running, too.

And, are you a coffee fan?

If so, welcome to Fethiye, Kahve Diyarı. Kahve Diyarı now has a branch along Fethiye harbour. And they specialise in coffees as well as çay and cakes and the like.

We’ve been to one of their branches along the kordon in Izmir’s Alsancak – lovely for a morning brew – and it’s always packed.

Let’s hope the Fethiye branch does just as well.

We’re looking forward to May in Fethiye and hope all the businesses have a great start to the season.

For us, personally, April was a super-fast hectic, but fun, month.

We’re hoping May in our little world is going to be a tad more chilled and quiet.