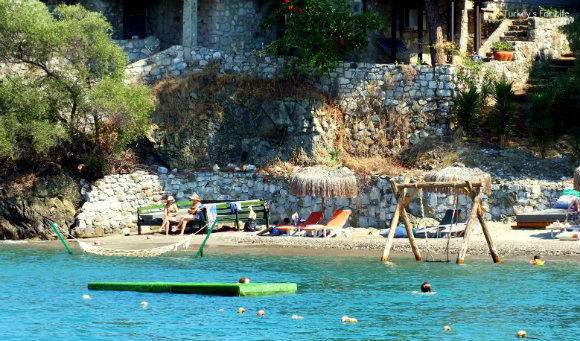 Articles like this one are always tough. The type of post where you just want to show the beauty of somewhere with photo after photo.

But, in the end, you’ve got to get a bit ruthless and choose the necessary ones. Those that tell the story.

In summer 2018, a guy we know took over the beach and restaurant on Şövalye Island. So Şövalye Adası Restaurant & Beach was born (‘ada’ means ‘island’).

As is the polite thing to do in Turkey, when someone you know embarks on a new venture, you go along to show your support.

This is never difficult in Fethiye because most of the people we know open lovely bars, restaurants and beaches.

Of course, these are the places we want to visit.

Stand in Fethiye or along Çalış Beach and look out into the bay and you get the constantly changing view of Şövalye Island.

We say ‘constantly changing’ because it seems you only need to walk a few metres and the shape of the island has completely changed.

Long, stretching and low, viewed from most angles. The angle in the photo above, however, is completely different.

The tip of the island, concealing the treats which lie in store for those who make the short hop over there.

This is your view of Şövalye Island as you wait at the jetty for the boat service to come and pick you up and take you across the water.

The boat jetty is at the end of Çalış Beach between the yöruk tents and Şat Restaurant.

At first, we weren’t sure we were at the right place but, eventually, we could see a boat bobbing across the water in the distance and it was heading our way.

The boat journey only takes about 5 minutes but you’re rewarded with sweeping views all along Çalış Beach.

And then, as you approach Şövalye Island, it’s a case of gazing up at the villas clinging to the steep cliff face, motor boats and speed boats moored up at private jettys.

This is the comfortable side of island life.

Eventually, we arrived at our destination, passing the beach that is part of the restaurant and mooring up at the jetty.

The beach at Şövalye Island is backed by mature trees which offer some natural shade.

Further shade comes courtesy of the umbrellas. As we got off the boat, wooden signposts directed us to the different facilities.

Toilets and showers to the right. Beach and beach bar to the left.

At the beach, people were sunbathing, swimming and making use of the ‘toys’ in the water.

As with Aksazlar Beach, there’s a swing here where you can trail your feet through the water.

And who said hammocks have to be on dry land?

If you want to lie, semi-submerged in the Mediterranean but you don’t fancy floating around on your lilo, clamber into the hammock for a cool down.

As with the beaches around Fethiye Peninsula like Help and JJ Beach Park, the sea at this part of Şövalye Island is quite calm and clear.

A swim barrier marks a boundary for safe swimming – day trip boats and fishing boats regularly anchor around this part of Şövalye island.

And there are jumping and diving platforms for those who like that sort of thing.

Not for us, though. You know we’re not particularly beachy people.

Actually, what we did when we got off the boat was to head straight up to the Şövalye Adası Restaurant area.

It’s long been a favourite place of ours for its seclusion and views. We were looking forward to reacquainting ourselves with them.

Walking up to the restaurant; there’s always a lovely feeling of anticipation even though we’ve climbed those few steps many times before.

You feel as if you’re walking into the trees, away from the sea.

And then, all of a sudden, you’re on a terrace area with dramatic sea views – views of the opposite side of Şövalye Island.

The indoor part of Şövalye Adası Restaurant & Beach is to the right corner of this photo.

And who could complain about a setting like this?

And you can climb even higher, too. Şövlaye Adası Restaurant is blessed with a roof terrace on top of the indoor restaurant.

Update for summer 2019: The restaurant/bar is now situated on the beach. You can still walk up to the terrace, however, to take in the views.

The photo above is the view of part of the main outdoor area below and then along the west-facing side of the island.

And you know what west-facing means, don’t you?

From this roof terrace, you can witness a spectacular, uninterrupted sunset.

As tiny as Şövalye Island is (we are told the population is around 100 in summer and 10 in winter) its geographical setting means it has lots of different faces.

From the restaurant roof terrace, you can see that gone are the calm waters of the sheltered beach area.

In their place are sheer cliff faces and crashing waves as they break against the rocks below.

And don’t be fooled by the fact that we’re only a stone’s throw away from the Fethiye mainland here.

To the left of this photo, we’re looking beyond red Island (Kızıl Adası) and out to open sea.

On a hot, summer’s day, you can feel the cool sea breezes as well as losing yourself in those magical views.

It was blissful when we were there.

A Wander Around Şövalye Island

Our first visit to Şövalye Island was a wander; a trip to an island and a beacht that we’ve not visited for a good few years.

With the current set up, however (easy boat access), we can get there whenever we like with minimal planning.

We like a beachy foodie day out with minimal planning!

After a cold beer, rather than hitting the beach, we decided to go for a little wander around Şövalye Island.

From the original restaurant, you can walk straight up the main pathway that guides you around the perimeter of the island.

All perfectly peaceful because Şövalye doesn’t have cars! Wonderful. And look at those stunning views back along Şövalye Usland’s cliff faces as you start your little walk.

As you follow the pathway, the only sounds are the crashing of waves. Or snippets of overheard conversations from people’s balconies and terraces.

Fishing boats and speed boats…oh, okay, and the odd bit of building noise from the villas that are being renovated.

A little dose of real life doesn’t do any harm, though.

Eventually, we rounded the tip of the island and another face was revealed. This time, we have the calm waters of the bay of Fethiye.

We’re overlooking the town and being watched over by Babadağ, across the water.

Beyond the jettys, the bungalows of Letoonia all inclusive hotel can just be seen, peeping through the trees.

It’s a super slow pace of life on Şövalye Island. Not a bad setting for a hammock, is it?

Gardens, both new and mature, decorate your route around the short pathway.

And, naturally, the sea views are constant. They just change a lot.

From one angle, we could make out the observation deck in Fethi Bey Park in the distance.

Some villa owners on Şövalye Island have built or renovated with an ultra modern look.

Others have gone for a rustic, traditional feel.

I couldn’t resist taking a photo of this entrance to a walled garden around one villa. What a lovely doorway, this is!

Eventually, you’ll see a wide dusty track, too. Don’t ignore this as this track can take you full circle back to the beach with little treats of ruins from the Byzantine era.

It also happens to pass the rear of Şövalye Hotel; a hotel that a reader had told us to take a nosy at as they love the place.

The owner was in the garden so he came over and offered to show us around.

Well, you’re not going to say no, are you?

And as balcony views go, these are not too bad are they?

We could see why our reader had recommended we drop by Şövalye Hotel And it was lucky that we just happened upon it as we were exploring.

Back To Şövalye Adası Restaurant & Beach

Time came to to head to the beach once more.

Time for one more drink – these little explorations are sunny, thirsty work – before we caught the boat.

A few minutes later, we could hear the splashes, laughs and calls of swimmers and sunbathers down below us on the beach.

As we sipped our beer, we made our pledges to return to Şövalye Island very soon.

We said our farewells to the new owners and headed down the slope, back to the beach and the boat jetty.

Day trip boats were anchored for their final stop of the day.

As we turned around to look back at the Şövalye beach, the sun glinted on the water and the sheltered bay became a silhouette.

5 minutes later, we were back at the jetty on Çalış Beach. Back on the mainland…

We can spend the day on an island and be back on the mainland within a few minutes!

Think we’ll be back there soon, too!