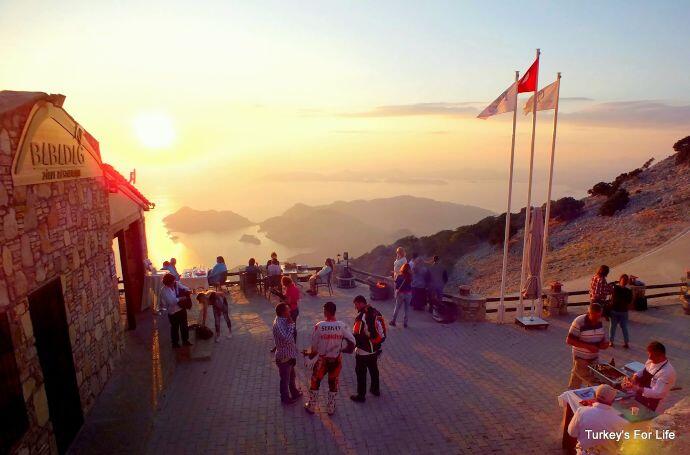 Well, hasn’t this turned out to be a Babadağ mini series! First of all, we wrote about why we came to be up on top of this fabulous mountain in the first place; there was a performance up there as part of the Fethiye Classical Music Festival in memory of Benyamin Sönmez. But we couldn’t leave it there because the drive to the top of Babadağ was worth a blog post all on its own – photos of views that just had to be on this blog; and, of course, there were a few wobbles from friends who suddenly realised they weren’t to keen on the drops from the roadside.

For most of us, it was our first time up to Babadağ, so we couldn’t just stand and listen to the music (although we did do that for a while) without also taking in what was around us, too.

Because the place where the musical performance was taking place was Zirve Cafe, very close to the summit of Babadağ. As we arrived, all the tables were set and, of course, they were all reserved. Just look at those views…The tables and the garden were soon full for the music but we were also keen to watch the paragliders taking off.

Some paragliders take off from the very summit of Babadağ and we wanted to head up there – but, by the time we decided, we would have missed the sunset if we’d set off. That can be saved for another time because we were more than happy with goings on here, a few metres below the summit.

A barbecue was available for those who wanted snacks, but we were more taken with the paragliding take off point. Wow, this is just so steep! The paraglider we watched took only a few gentle steps before his parachute was fully opened and he just glided off the edge of the mountain into the air…so peacefully…so effortlessly.

I tottered off down the slope and it’s much steeper than it looks. A few steps down and, when I turned around, Zirve Cafe and the other spectators already looked a long way above.

Would I ever have the bottle to do what thousands – even millions – of others have dared to do before me and walk off the edge of Babadağ, into the air and over the Mediterranean? Probably not.

Barry says he’d do it again with me if I decided to do it…and it does look so calming…but I know I would be far from calm! Anyway, let’s put those thoughts aside and get back on the solid ground of Babadağ.

Well, we did a little bit of clambering on the side wall just to get some slightly higher views, as if we weren’t already high enough. It was lovely just to watch people milling about below as the sun started to set. Paragliders were still taking off just to our right and the music continued just to our left.

And there, just below us, was local motorcyclist Serkan Özdemir. We’ve followed his antics via his Facebook page for a while. He’s been Turkey’s Enduro champion from 2011-2013 and has just taken part in the Transanatolia off road race. This was a day out, we were having fun, I’d grab a photo of him later. Why not?

First of all though, we joined everyone else in the clamber for catching sunset photos – a real privilege to be up here at this time of day to see this – and then we wandered off to get that photo of a famous Fethiye face. Fortunately, he’s an obliging chap and was only too happy to have his photo taken…even with Barry standing and grinning by his side.